Facts, growth, maintenance, and uses of the red flag bush

Mussaenda is one of the most sought-after tropical shrubs because of its tremendous beauty, displayed by highly coloured flower bracts that bloom throughout the warmer and hotter months of the year.

As a result of its vibrant petiole bracts, Mussaenda has become a widely used decorative shrub. It belongs to the family Rubiaceae of plants and is commonly known as Ashanti blood or red flag bush. This article discusses the cultivation and maintenance of a shrub.

Watering from a hose or sprinkler should be done slowly and adequately but not frequently. This minimises shallow root development or root infections. Most established trees, shrubs, and vines may go weeks without supplemental watering except in exceptionally hot or windy conditions. Don’t water until the top several inches of soil have dried up.

Use and maintain water-saving soaker hoses or drip irrigation as much as possible, especially in dry climates. Drying out, apart from the cold, is the primary cause of damage in winter. Keep the soil moist, not wet, by watering lightly twice or thrice weekly. Water loss can be reduced by using mulch in dry, windy, or sunny climates. 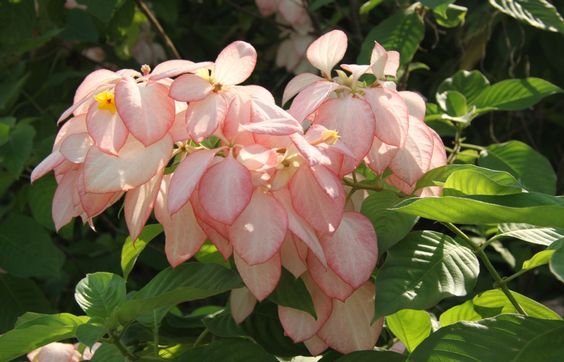 When shaping or training plants into hedges, topiary, espaliers, or other unusual shapes, pruning serves many purposes, including size management and pedestrian safety, the removal of dead or diseased sections, and aesthetic appeal.

Evergreen and deciduous broadleaf plants can be pruned as much as needed, even to the trunks. New shoots will appear close to the severed ends.

Pollarding is the practice of cutting back trees to make them grow bushier. Most neighbours don’t like it, but it benefits the trees in the long run.

No significant pest or disease problem exists for these plants, more so if their needs for food and temperature are addressed. They may be attacked by millie bugs, which can lead to the growth of sooty mould. Due to the hot and dry weather, these insects are more prevalent. Outdoor plants can also attract spiders, mites and whiteflies.

Apply fertiliser during the beginning of the plant’s active growth period, which is in the spring for summer plants and the fall for winter plants. Select a fertiliser with a higher nitrogen and phosphorus content if you want your plants to bloom or produce fruit.

If you’re applying fertiliser that dissolves in water, do these things:

When applying fertiliser in granule form:

Due to their height, Mussaenda bushes are typically placed at the back of a garden, so if you want to hide the bare ground at their feet, you can do so by planting a low-growing ground cover or another bush. To do this, you need to pick plants that have a fighting chance against the plants you’ve chosen.

Are Mussaenda leaves safe to eat?

Yes. The leaves are chewed with betel and used as a poultice to treat headaches.

Can Mussaenda be grown in pots?

Yes. Plants can be cultivated in containers in cooler regions.