Ficus plant is one of the most popular foliage plants suitable for growing as an ornamental houseplant inside, or outside in gardens. Ficus tree holds importance in Buddhism and Hinduism. Ficus religiosa is the most popular Bodhi tree, under which Gautam Buddha attained enlightenment. Ficus comes in an amazing variety, from low ground cover to tall trees, each one with beautiful texture and leaves. Ficus plants are species of woody tree, native to tropical regions of the world. Ficus plants are available in various shapes and sizes. There are about 850 species of plants in Ficus genus. Ficus plants’ sizes range from small shrubs to huge trees, and in different colors. All species are distinct due to their tendency to have aerial roots, as well as the fruits they bear. Its genus includes trailing types, Bonsai, and indoor Ficus tree. Fig species are characterized by their inflorescence and unique pollination as done by wasp species belonging to the Agaonidae family. 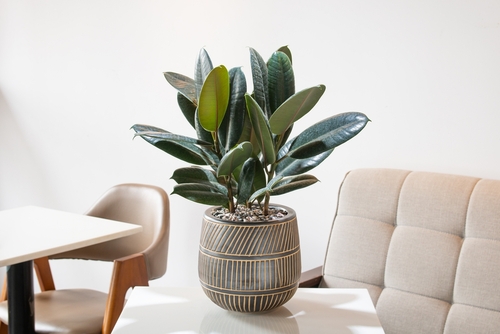 How to take care of Ficus plants

The best type of soil to grow Ficus plants is well-drained loamy soil. Ficus thrives in neutral soil that has a PH between 6.5 and 7. If you are growing Ficus indoors, ensure that there are enough holes at the bottom of the pot to allow excess of water to drain out. Add fertilizers during the spring and summer seasons to the plant once in a month. During the autumn and winter months, you can slow down it to once every other month. Ficus plants prefer balanced, and all-purpose fertilizers.

Ficus plants need consistent, but moderate watering throughout the growing season, with dry spells in winters. Make sure the soil remains moist, neither dry nor drenched. Over-watering will turn its leaves yellow. You can increase humidity by misting its leaves regularly.

The best time to prune Ficus tree indoors are during the spring and winter seasons. This can help to maintain the growing indoor tree to a reasonable height. Regular pruning also encourages new leaves’ growth and results in a bushy Ficus tree. It can reach immense heights naturally, but only if you re-pot plants into a large container. Therefore, you must keep your Ficus healthy by controlling its growth through pruning. Pruning will also stimulate the growth of new leaves. 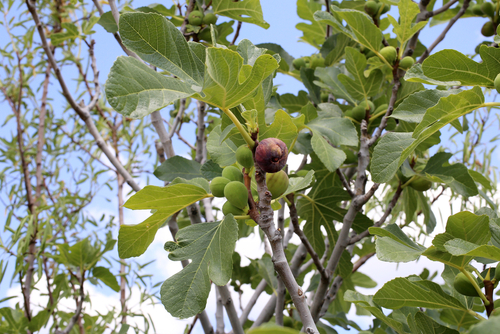 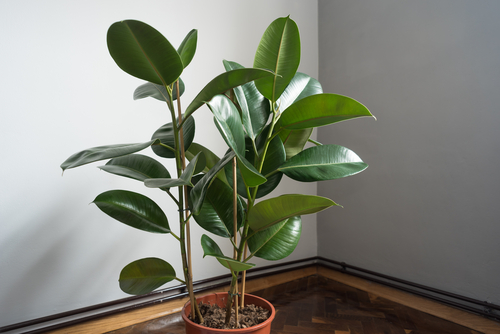 Also read about these gardening ideas and tips for beginners

There are many types of Ficus trees including shrub-like plants, creeping vines, and woody trees. For outdoor space trees, Ficus plants can be large Banyan, Fig, or Laurel trees. Popular indoor plants are Fiddle-leaf fig, rubber plant, Audrey Ficus, and Weeping Fig. Leaves grow dark burgundy in rubber plants, diamond-shape in Weeping Fig, small-as-a-pinky-nail in some creeping varieties, and others have huge leaves.

Here, we share the most common type of Ficus plants.

Ficus benjamina: A popular indoor plant, Weeping Fig (Ficus benjamina) has green shiny leaves and bushy appearance. Found all over the world, Ficus benjamina is known as Weeping tree as it tends to shed its leaves whenever it is moved from one position to another in an unfavorable habitat.

Commonly known as rubber plant or rubber tree, Ficus elastica is one of the easier Ficus plants to care and grow indoors. Rubber tree can be found in many varieties: variegated, deep maroon, and green leaves. As per Feng, Ficus elastica attracts wealth, prosperity, and good luck.

Lyrata means lyre-shaped, referring to the plant’s leaves as it has large leathery leaves (up to 12 inches) like the shape of fiddle. This member of the Moraceae family is native to West Africa. This tropical plant is also an air purifier.

Ficus microcarpa, better known as Indian Laurel, Curtain Fig Ficus Ginseng is a popular indoor houseplant, native to the tropical regions of Asia and Africa. It has dark-green leaves and a ginger-shaped fat trunk with aerial roots, making it an ideal Bonsai specimen. Growing to a height between 1 to 3 feet, it can make a perfect addition to your home.

Also read how to grow and take care of Ficus Auriculata

Creeping Fig or Ivy Fig is a type of woody creeping Ficus vine grows both inside, as well as outside. It has small heart-shaped leaves and fast climbing growth. Ficus pumila grows well in pots where the green foliage can dangle down, place them indoors in hanging baskets or on a shelf. It is often seen on walls of large mansions in many countries.

Ficus Audrey, or Ficus benghalensis, is a woody plant with a light trunk and vibrant green leaves with light green veins. It’s also known as Strangler Fig and Banyan Tree. Even though, this type of Ficus tree grows to enormous heights outside, you can keep it as a compact indoor plant. It is a common Fig tree in India, the national tree, having cultural significance. Banyan tree is a home to distinct animals and birds that reflect India and its people from various race, faith, and caste. The tree is also known as ‘Kalpavriksha’, which means wish-fulfilling tree.

Ficus carica is known by its common name, Common Fig. Ficus carica is rich in vitamins and minerals, besides producing edible fruits. It is known for its large, lobed leaves and cultivated as an ornamental, as well as a fruit tree. 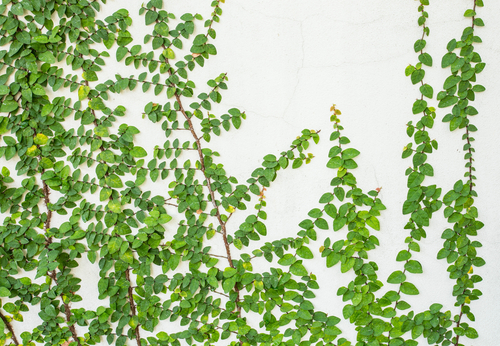 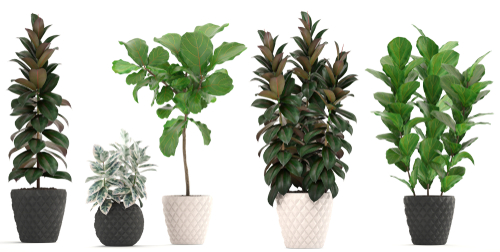 Propagating Ficus is not difficult, but messy due to the milky sap that oozes out when cut. Stem cutting is the common method to propagate the vine and shrub varieties. Take a branch and cut about 12 to 14 inches from it. Place the cutting into well-drain soil in a pot and cover it with clear plastic, which works like a greenhouse. Fill a small pot with well-drain potting soil and place the cutting into the soil. Water thoroughly and put it in a sunny location with no direct rays. After two months, new roots will appear. Once the root system has been established, plant it into a 6-inch pot and watch it thrive.

Cleaning the leaves of Ficus regularly with a damp cloth to wipe dust can also remove pests that gather under the bottom of leaves. If Ficus has brown leaf edges, it means there is lack of water and light, or low humidity, or both. Dry leaves indicate too much of direct sunlight or low humidity. Leaves fall can be caused by sudden change in temperature, changing the location of the plant, or over-watering. Falling leaves can be the first sign that something is wrong with the soil. If you find the leaves of your plant are falling, then check if its soil is getting drained properly.

Harmful microorganisms can damage outdoor, as well as indoor plants. The first sign of scale insect infection is yellowing and curling of leaves that result in quick death. Wash the plant directly under the tap or shower to wash off all insects. This is the easiest way to get rid of. Wash every leaf to clear the infestation and repeat the process a few more times. Indoor and outdoor Ficus trees are vulnerable to mites, scale, mealybugs, whiteflies, and aphids. Fight these pests with an insecticide, such as neem oil. Occasionally, Ficus trees can contract a leaf spot disease. Cut and remove the infected leaves to stop further spread of fungus growth.

There are several varieties of Ficus plants, which have fruits called fig (Ficus carica). It is an edible part in purple colour, packed with nutrients and associated with many health benefits. Common fig (Ficus carica) is cultivated for its pear-shaped edible fruits, which are nutritious and aid in digestion, decrease the risk of heart diseases, and help manage blood sugar levels.

Ficus or fig tree is home to birds, butterflies, monkeys, and bats.

Ficus plants also purify air by filtering toxins from it. They can filter out pollutants such as formaldehyde, benzene, and trichloroethylene.

Ficus fruits, roots, and leaves are used in traditional medicine to treat ailments such as gastrointestinal indigestion, loss of appetite, and diarrhea, respiratory and cardiovascular disorders. 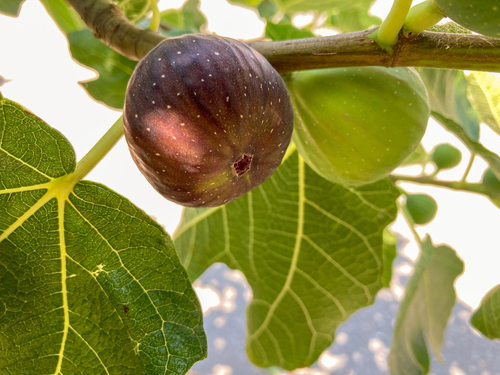 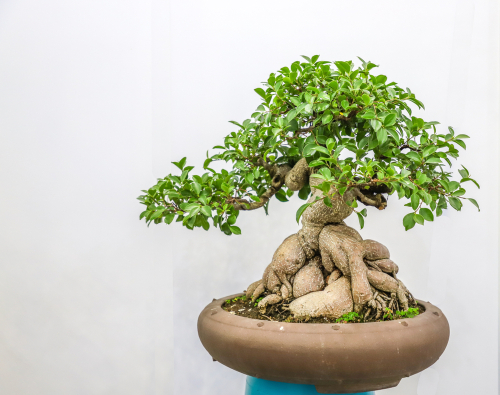 Is Ficus a good indoor plant?

The Ficus genus of ornamental plants is a range of species popularly grown indoors — house, office, and hotel. Ficus trees are easy to grow in a place with bright indirect light, following a consistent watering schedule.

What are Ficus plants good for?

How will you take care of Ficus Bonsai?

Ficus is one of the most popular trees for indoor Bonsai. Ficus Ginseng Bonsai, Ficus Benjamina, Ficus Carica, and Willow Leaf Ficus, are among the most popular Bonsai. Place it in a bright area. Ficus prefers room temperature soft water and can tolerate occasional over or under watering. Daily misting helps to maintain humidity, but too much misting can create fungal growth. Pruning can be done to reduce leaf size. Use organic fertilizer at least once in a month.

Ficus group of plants have more than 850 species of trees, shrubs, and vines, many of which are commonly known as figs. Nearly all types of Ficus plants produce fruits called fig. However, there is only one type of Ficus, which is cultivated, and its fruits are edible, called Ficus carica. It is native to Mediterranean regions and western Asia. It has been cultivated since ancient times and is now widely grown across many countries, as its fruits can be eaten fresh, as well as dried.

The Fence You Choose Will Give You More Than Just Privacy