Nashik: Top Tourist Places To Visit And Things To Do

Nashik is a small city located on the banks of the Godavari river. The city is an important Hindu pilgrimage site, because the Kumbh Mela finds its epicentre here. You can visit the city any time of the year, since the weather is very pleasant. It is one of the few cities where people can safely go trekking, even in the monsoons. There are a large number of places to visit in Nashik which is why many tourists come here.

By train: There are multiple ways you can reach Nashik. Nashik Road Railway Station is Nashik’s main railway station and serves the city and its surrounding areas. It is one of India’s oldest and busiest railway stations.

By air: If you want to reach Nashik by air, you can fly into the Nashik International Airport, formerly known as Ozar Airport. This airport is located 20 kms north-east of the city of Nashik.

By road: If you reside in Mumbai, then you can reach Nashik by car. It will take you about 3 hours and 30 minutes to reach Nashik from Mumbai via NH160.

If you are new to Nashik or want to visit the place for a tour, take a look at these Nashik tourist places, which should be a part of your itinerary.

Places to visit in Nashik #1: Saptashrungi

Saptashrungi or Saptashringi is a Hindu pilgrimage site and one of the most spiritual places in India. Located about 77 km away from the main city of Nashik, Maharashtra, the temple houses the deity Saptashrungi Nivasini who is said to dwell within the seven mountain peaks. You need to climb 510 steps to reach the temple premises. Every year, hundreds of devotees from the Shaktism sect of Hinduism flock to the temple to offer their worship. The temple is a part of the 51 Sati Peethas in India and one of three in Maharashtra. You can hike to the temple and offer your prayers here in peace. You can easily reach the temple by taking a cab from Nashik Railway station. The Trirashmi Caves or Nashik Caves are a group of 23 caves located 8.9 km away from the main city. The caves were carved in the 1st century BCE-3rd century CE. The caves display some spectacular rock-cut Buddhist sculptures, which are a part of ancient Indian architecture. Among the major places to visit in Nashik, one can make a day trip here. You can avail of private transport, which takes tourists to the caves and explore the area. Additionally, you should also visit the caves around named Karla Caves, Bhaja Caves, Patan Cave and Bedse Caves. Trirashmi Caves can be reached from Nashik Railway station or Nashik airport and is a short ride through public or private transport.

Ramkund in Nashik is a popular tourist site and a top tourist place in Nashik. The pond is said to be extremely sacred for Hindus because Lord Rama is believed to have taken his bath here before leaving for exile. People flock to the temple and the pond, which is considered highly miraculous and sacred. The pond is also the centre of the Kumbhamela, which is attended by millions of people around India. Ramkund is situated within the city premises and open to tourists. You can relax by the Ghats, or take a dip in the pond, which stays crowded on Akshaya Tritiya and during the Kumbh Mela but you can catch the amazing sunset around the pond even from a distance. Ram Kund is only 4 km away from Nashik bus stand and can be reached by public transport. Anjaneri is one of the forts in the mountain range of Nashik-Trimbakeshwar. Anjaneri Hills is situated only 20 km away from Nashik and is accessible by Trimbak Road. With an elevation of 1,280 m, the hills are among the popular places to visit near Nashik. People visit Anjaneri hills as a part of a trekking expedition which is popular in the rainy season. The trek will take you through the lush green hills, which offer stunning views of the Valleys below. Don’t forget to visit the waterfalls and take some amazing pictures. The Dudhsagar Falls in Nashik is one of the best tourist places in Nashik nearby. The waterfall is pretty impressive and will mesmerise you with its power and beauty. Located only a short drive away from the main city, the waterfall, also known as Someshwar Falls, is located amidst serene surroundings. Although it doesn’t have a considerable height, the waterfall during the rainy season is at its full capacity and truly a sight to see. You need to visit the place using private transport and can plan a day trip around the area. This is a great place for a quaint picnic away from the crowded city. Dudhsagar Falls is 9 km away from Nashik bus stand and can be reached by local transport. 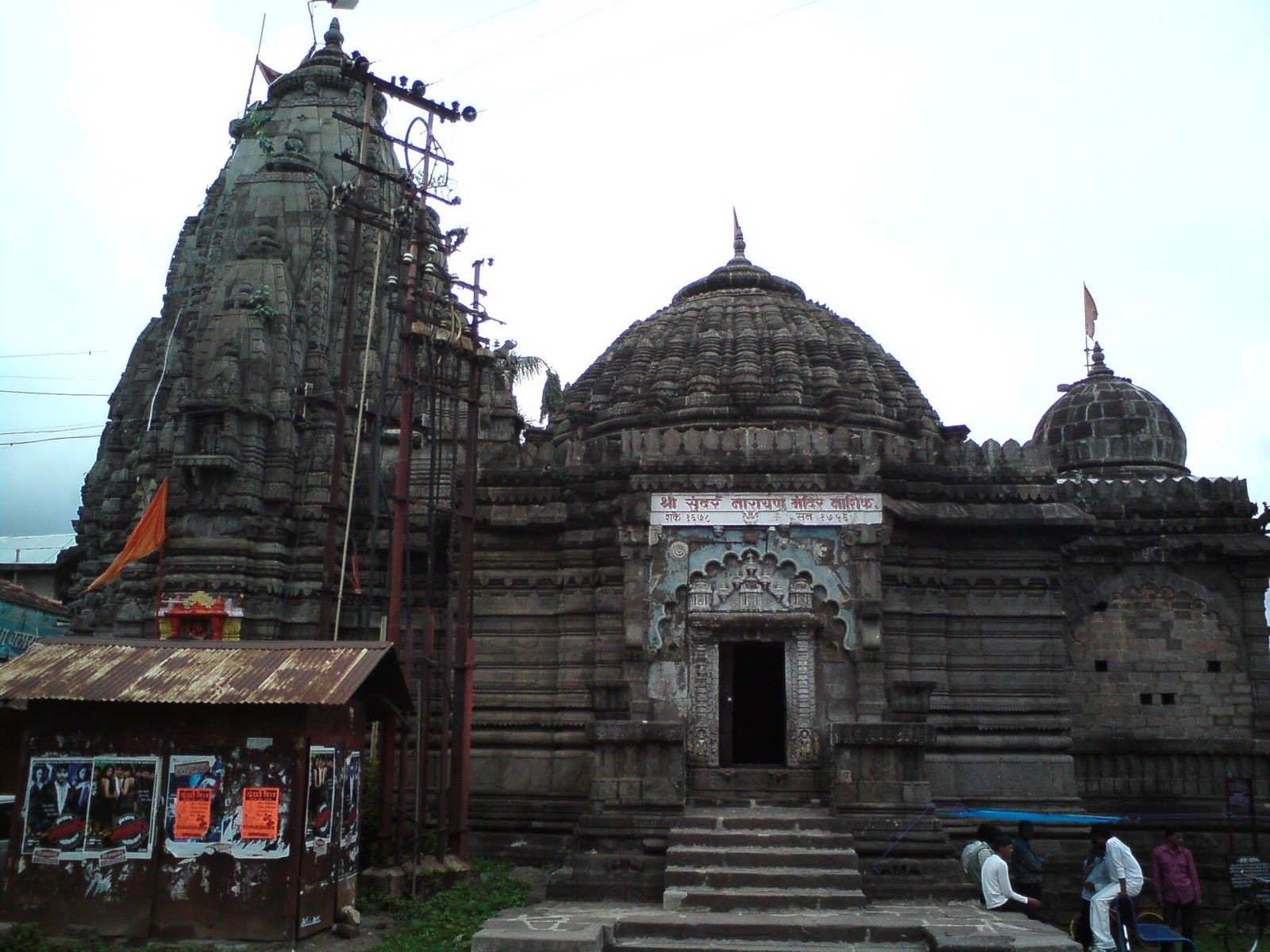 The Sundarnarayan temple near Nashik city is a temple built in the 18th century. The temple houses the deity of Hindu God Vishnu. The rock-cut architecture with various artistic motifs is truly a sight to see. It was commissioned by Gangadhar Yashwant Chandrachud and is currently an important temple for Hindus and Vaishnavas. You can travel to the temple by roadways and avail private vehicles from the main city itself. There are also provisions to stay back at hotels in case you want to spend more than a day exploring the holy temple. Regular puja is also conducted at the temple, which can be attended by devotees. The place can be accessed from Nashik and Igatpuri railway stations and then a short bus or cab ride from there.

See also: 10 best tourist places to visit in Mumbai and things to do Sula Vineyards in Nashik is well-known all around the world. It was started in 1999 and currently as the largest market for wine in India. Sula is also a popular Indian brand abroad. The vineyards will take you through the vast fields of grapes which form the source of their wines. You can even find the prized chenin blanc grapes which were first introduced in India by the brand. The vast fields are truly a sight to see and you will be mesmerised by the amazing sunsets which settle over the fields every day. Take a tour of the fields and have a picnic among the Vineyards when you visit Nashik. It is 12 km away from Nashik Central Bus Station and takes about 26 minutes to reach Sula Vineyards by road. It is 20 km away from Nashik railway station and it takes about 50 minutes to reach Sula Vineyards in a car.

The Vihigaon Waterfall is only 59 km away from Nashik bus stand and can be reached from the Mumbai-Nashik Highway. The falls is one of the most beautiful tourist places near Nashik and should be visited by everyone travelling to the city. An extremely picturesque road will take you to Vihigaon Waterfalls which lies surrounded by dense forests. This splendid waterfall is not overly crowded, so tourists can enjoy the beauty of nature in peace and quiet. You can conduct a day trip to the waterfall and have a quaint picnic by its pond. Additionally, you will be able to catch some amazing photographs of the woods and watch rare migratory birds that come to nest here for winters. The Coin Museum is one of the best Nashik places to visit within the city premises. The Coin Museum has an excellent collection of new and old Indian currencies. The Museum was started in 1980 and is the only museum of its kind in the entire continent of Asia. Located amidst the Anjneri Hill of Nashik, the Coin Museum is open to tourists who hold an interest in learning about coins. You will also find some displays of fossils and artefacts from the Harappan Civilisation here. Additionally, you will see dioramas depicting coin minting and coin manufacturing techniques. The museum is open to tourists from 9.30 AM to 1 PM and 2 PM to 5.30 PM on all days, except Sundays and public holidays and requires no entry fee. Harihar Fort, or the Harshagad Fort, is situated only 40 km from Nashik City. The best place to visit in Nashik, Harihar Fort is also a popular trekking destination. The steep and peculiar rock-cut steps mesmerise tourists and bring them to this destination. The Fort was constructed by the Seuna (Yadava) dynasty. You can take your friends here and embark on the trek to reach the top of the fort. The view from the top itself is nothing short of stunning. You can travel to the place after taking a ride from the Nashik railway station.

Places to visit near Nashik #11: Trimbakeshwar 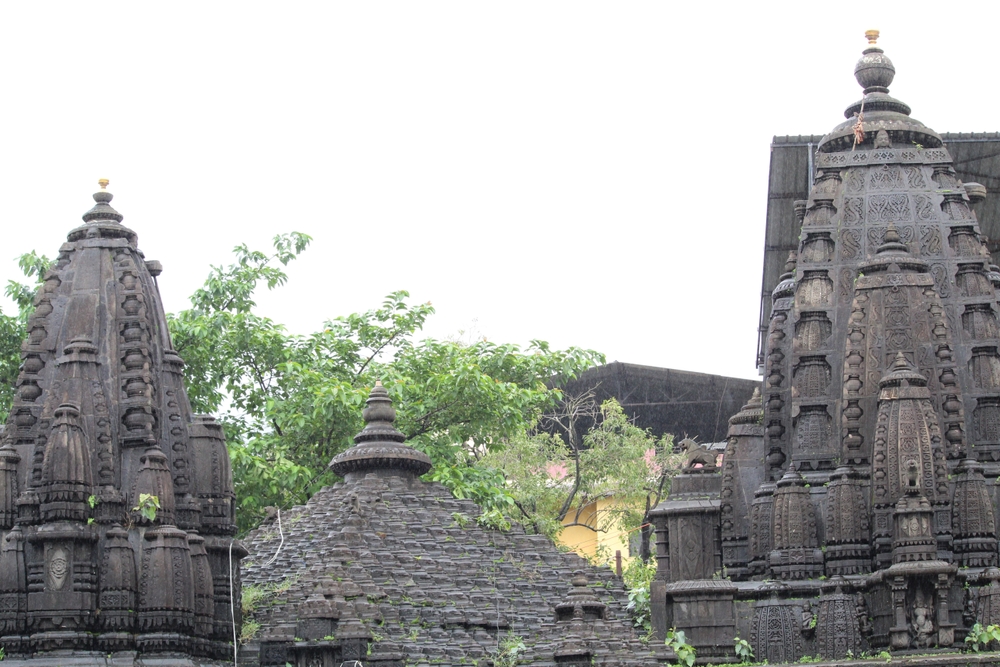 Triambakeshwar Shiva Temple is a highly spiritual place in Nashik. It is located about 30 km away from the city and is easily accessible by the Nashik to Trimbakeshwar Road. The temple is an important site for Shaivites. This ancient Hindu temple in Trimbak is dedicated to the Hindu god Shiva. The temple is a part of the twelve jyotirlingas in India. It is said that the pond here is the source of the sacred Godavari River. You can visit the place to offer worship at the temple and marvel at its great architectural beauty. The temple is surrounded by greenery and is the epitome of peace and solitude.

See also: Top 10 places to visit in Pune and things to do Shopping in Nashik is a must when you visit the city. Nashik is famous for its Silverware. You can stroll around the markets and explore the various shops that sell handcrafted silver goods. You will find a variety of goods like puja essentials, small deities, utensils, jewellery, etc., in these shops. Make sure you visit multiple shops to get the best deals and products. You can take home some trinkets for your family and friends as souvenirs from Nashik city. When visiting Nashik, you should definitely try the local cuisines and delicacies of the city. Nashik is well known as the birthplace of Indian wine. However, the food in Nashik is also beyond comparison and should be among the top things to do here. You can try out a huge variety of vegetarian snacks and meals at low costs. You can either visit the top restaurants of the city or buy from small local shops which sell some lip-smacking snacks. Some of the best places to eat in Nashik are Barbeque Ville, Haji Darbar Restaurant, Divtya Budhlya Wada, Nandinee Woodlands, The Sidewalk, and River Dine Restaurant & Banquet.

What is the best time to visit Nashik?

The best time to visit Nashik is during the winter season, namely the months from October to March.

What is the coldest month in Nashik?

January is the coldest month in Nashik.

Is Nashik worth visiting?

The ‘wine and grape capital’ of India, Nashik is blessed with rolling hills, rich history and magnificent beauty.

Things to do in Gaya