As the country’s first live entertainment venue, Kingdom of Dreams (KOD) offers some advantages over other amusement parks. At KOD, the quaint villages and the vibrant city life collide with revolutionary technological progress, a unique mix that makes this location worthwhile to visit.

Culture Gully, India’s first skydome, is housed inside the Kingdom of Dreams and features vendors showcasing street arts, fine arts, and local cuisine from 14 states. Various festivals and events are held on the grounds of the Kingdom of Dreams. Numerous well-liked acts are presented in the entertainment district specifically for audiences of all ages, including young people, seniors, and parents.

What are the timings of the Kingdom of Dreams?

Viewers may catch the Jhumroo Show on Tuesday, Thursday, and Saturday starting at 7:00 pm, as well as Wednesday, Friday, and Sunday at 1:30 pm. The Zangoora Show airs in Kingdom of Dreams on Tuesdays, Thursdays, and Saturdays at 2:30 p.m., Wednesdays and Fridays at 7:00 p.m., and Sundays at 6:00 p.m. Every Monday, the entertainment complex remains closed.

How to reach the Kingdom of Dreams?

By Air: The distance from Kingdom of Dreams to the airport, Indira Gandhi International Airport, through the NH48 connection road is only 14.4 kilometres. The best types of transportation to get to the Kingdom of Dreams after you arrive in Delhi are taxis or the metro.

By Train: The Sikanderpur metro station is the nearest one to the Kingdom of Dreams.

By Road: If travelling from other cities, you must arrive in Gurugram to reach Kingdom of Dreams. You can book a cab from anywhere in the Delhi-NCR and get to the location.

Kingdom of dreams: An all-in-one dream place for entertainment

With cutting-edge, state-of-the-art equipment and two theatres that meet international standards, Kingdom of Dreams guarantees that you will go on an exciting voyage through the varied way of life, culture, and customs of different areas of India. Given below is a list of the top attractions at KOD.

The majestic Showshaa venue can accommodate up to 300 people. It is ideal for significant stage performances, themed production activities, and similar occasions. This cutting-edge technical location is supported by custom lighting, improved video, a cutting-edge sound system, and projection features that provide an enticing experience.

Once the curtains are opened at Nautanki Mahal, one can sense the incredible energy. Many of the best shows take place in the Mahal’s theatre, which is crowded with enormous costumes and upbeat music.

The most exotic Bollywood musicals now on display here are Jhumroo and Zangoora, which are suffused with splendour and flawless story-telling. It has gained great acclaim for its superb presentation, and one cannot ignore the delights of going to the theatre. Even though you have visited Indian neighbourhoods, you might not have been on a street that features everything from artisan villages to themed restaurants and libraries. Wander over to the Culture Gully, a dome-covered, air-conditioned street.

The street displays folk dances, ethnic jewellery shops, home décor shops, and many other attractions from fourteen states in India. 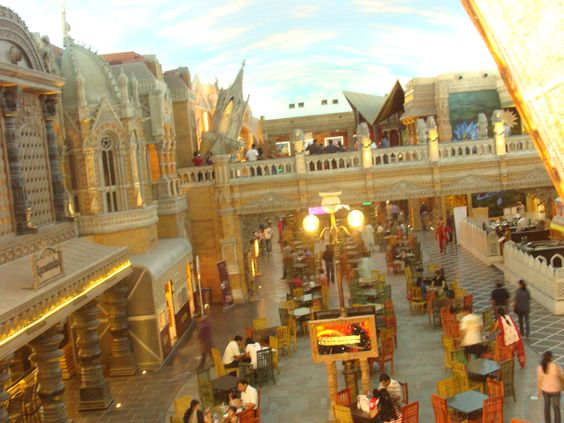 If you are travelling to KOD, IIFA Buzz is the perfect stop for any Indian film enthusiasts. This area was designed to look like a lounge. See your reel-life aspirations come true at IIFA Buzz as props, ultimate posters, famous memorabilia, and much more are shown.

Many well-known eateries and coffee shops are located inside and close to Kingdom of Dreams. The restaurants inside the Kingdom of Dreams serve state-specific ethnic food that mixes the formal dining customs from all around India.

How come the Kingdom of Dreams is so well-liked?

Kingdom of Dreams is a vibrant entertainment hub that stands out from the crowd because of its unique blend of Indian heritage, arts, culture, and food.

What is the cost of a Kingdom of Dreams ticket?

Does the cost of entry to Kingdom of Dreams include food?

No, admission to Kingdom of Dreams does not include meals. Only the concert is included in the ticket price.

All about online frauds and QR Code scams, every property buyer and seller must know about

All about online frauds and QR Code scams, every property buyer and seller must know about

Bangkok tourist places: A comprehensive list to help you uncover all that the city has to offer