Varkala is a municipal district in the southern state of Kerala. Known for its beautiful beaches along the Arabian Sea, Varkala is an increasingly popular tourist destination among Kerala tourist places for people all over the world. From ancient religious monuments to stunning natural viewpoints, Varkala has a lot to offer to tourists. Here’s a look at the travel routes to Varkala and the various unique Varkala tourist places that you can explore.

How to reach Varkala, Kerala

By air: If you are travelling by air, you can take a flight to Thiruvananthapuram, which is merely 40-50 km from Varkala. You can easily find transport from the airport to Varkala upon your arrival.

By road: Travelling by road can get a little crowded and tedious as it involves changing buses a few times. However, this is perhaps your best option if you want to travel on a budget. You can take KSRTC buses from Kochi and reach Attingal on the way to Thiruvananthapuram. From there, you can get connecting buses to Varkala.

10 amazing Varkala tourist places that are a must-visit

Varkala is the only place in Kerala where you can find the unique setting of cliffs overlooking the sea. That there are plenty of Varkala tourist places to explore that are unique and offbeat.

The premier tourist destination in Varkala, this beach is a sight to behold. Away from the crowds and commotion of the major commercial beaches in Kerala, you can enjoy the serenity of nature at this beach. Surrounded by cliffs with a long shoreline of the Arabian Sea, it is the best place you can find in Varkala. Located only 10 km from the city centre, the Varkala beach has a variety of activities, like parasailing and paragliding. All these factors make this beach a fantastic destination to travel where you can relax and go on thrilling adventures at the same time. To get to and from the beach, you can use public transport such as auto rickshaws, cabs, or buses, whichever is most convenient for you. If you are a photographer or love getting clicked by a camera, this is the place to visit for you. The Varkala cliff that overlooks the beach is the most photogenic spot in Varkala. You can climb up the cliff, made of laterite and get a bird’s eye view of the beach and the Arabian Sea. This cliff has been declared a geological monument by the Geological Survey of India for its unique formation. Viewing the sunset from atop this cliff on the Varkala beach is a sight you would not want to miss. The Varkala cliff is located on and around the beach of Varkala, so you can get to and from the cliffs the same way you would to the beach by using public transport such as buses or autos. Mangrove forests are eerily beautiful and quite adventurous. How would you like to go kayaking for four kilometres inside these mangroves near Varkala? If the answer is yes, then, you should definitely visit the mangrove forests at Nedungolam near Varkala. Located at a distance of 18 km from Varkala, this can be a highlight of your trip when you explore the mangroves known for their eerie beauty and serenity.

The distance of 18 km from the city centre can be covered using the wide array of public transport that is available such as buses, cabs, or autos. 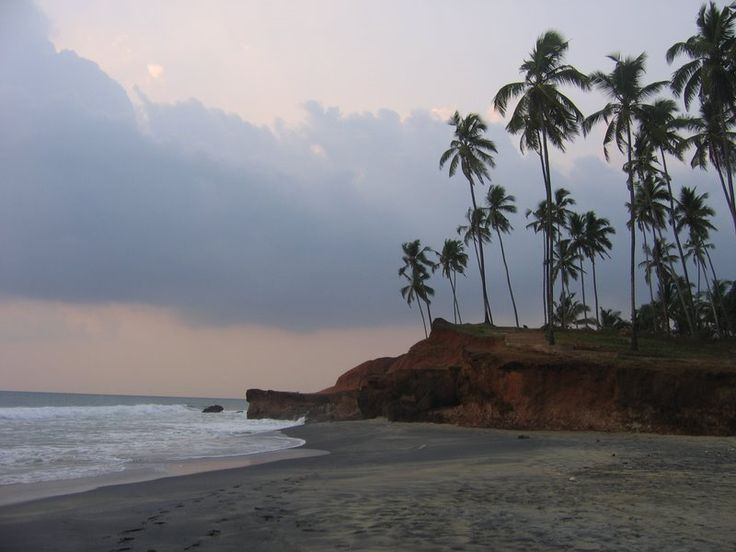 The Edava beach at Varkala is one of the cleanest and most offbeat beaches in the vicinity. These beaches have minimal human intervention allowing them to be as natural as possible. It is an excellent place to relax and take time to reflect on your life. So, if it is peace of mind you search for, be sure to visit Edava beach.

This beach is located just 5 km from the city centre of Varkala, where you can easily reach using public transport, or if you are up for it, a brisk walk. The Janardhanaswamy Temple is an ancient temple located close to Varkala and Thiruvananthapuram that is dedicated to Lord Vishnu. This temple is one of the most beautiful examples of ancient architecture in Varkala. If you want to experience the temple in all its glory, it’s best to visit during the months of March and April. During that period, an eight-day long grand celebration is organised at the temple for a local festival known as the Arattu festival. The Janardhanaswamy Temple is one of the most crucial religious tourist spots in Varkala.

This temple is located less than a kilometre from the city centre of Varkala, so you can easily get to and from the temple on foot.

See also: Places to visit in south India for a thrilling excursion Black sand beaches, lush coconut groves, and away from the crowds of commercial beaches, this is just a glimpse of what you can experience at Thiruvambadi beach. Located close to the Thiruvambadi road, this beach is notable for its location.

The beach is flanked by the north cliffs of Varkala, which allows you to enjoy incredible views without any disturbances. Due to the offbeat nature of this beach, you can unwind and relax at this location without the rush of crowds.

This beach is located at a distance of only 2 km from the city centre, you can easily walk there or take any available public transport. The Sarkara Devi Temple, located 12 km away from the city centre of Varkala, is an important Hindu religious spot. This temple is dedicated to Goddess Bhadrakali. This temple is very scenic and is a fantastic example of ancient architecture in Kerala. Every year a major festival is organised in the month of March at this temple. The Kaliyoot festival attracts thousands of tourists from across the country every year. The festival goes on for 10 days.

The temple can be reached easily using public transport such as autos, buses, and cabs. Kerala is famous for its backwaters but do you know the location where the backwaters meet the Arabian Sea? The Kappil Lake is where it’s at! The Kappil Lake is a beautiful backwater lake in Varkala that is separated from the Arabian Sea by a narrow stretch of land, which has a road on it. This location is incredibly scenic, and you can even see the exact spot where the backwater meets the sea from a nearby bridge.

The Kappil Lake is separated from Kappil Beach by a narrow stretch of land. The rocky Kappil Beach is also an equally exotic tourist attraction, with the crystal clear Arabian Sea and the Kappil Lake, both in close proximity. You can enjoy the scenic views while you take a long walk on the beach.

Kappil Beach is also located 6 km from the city centre of Varkala. You can reach here the same way you can reach the lake, by public transport.

See also: Places to visit in Trivandrum and things to do At last, when all the exotic locations are explored, you need a place to rest and get some grub. One of the most popular cafes in Varkala is the Darjeeling Cafe, with its superb location close to the beach. You can try out many local delicacies served in an authentic local style. It is one of the best places in Varkala for you to try out the local cuisine, as well as some specials brought to you by the cafe. The Darjeeling cafe is located only 2 km from the city centre of Varkala, you can easily get here by using autos or cabs.

What is the best time to visit Varkala?

The best time to visit Varkala is in the months of October to April. Various local religious festivals take place in these months at Varkala, which you can enjoy. You can also enjoy the beaches and all the viewpoints best during this period.

Is Varkala worth visiting?

Can you swim at Varkala beach?

Yes, you can swim at the Varkala beach, but ensure that you take necessary precautions. The water is clear and it will be an incredible experience for you. You can also go for adventure activities like parasailing and paragliding at the Varkala beach.

A Guide To Calculate Stairs For House Construction

A Guide To Calculate Stairs For House Construction

Why Should You Call A Plumber?