Pachmarhi, one of the most picturesque and modest tourist attractions in Madhya Pradesh, is perfect for a rejuvenating weekend getaway or an annual family holiday. Pachmarhi is home to several destinations that are breathtaking, such as waterfalls, historic sites, and tunnels that are shrouded in mystery.

Moreover, we have included a number of different travel options that might get you to Pachmarhi.

By air: The closest major airports to Pachmarhi are Bhopal and Jabalpur. Visitors may easily reach these destinations through direct flights from Delhi and Indore. You may take a bus or a taxi to Pachmarhi from the airport.

By train: The closest railhead to Pachmarhi is located at Pipariya, around 47 kilometres distant from the city.

By road: Pachmarhi is easily accessible through state-run and commercial buses from Jabalpur, Bhopal, Nagpur, Indore, and other adjacent towns and tourist hotspots.

In Pachmarhi, Madhya Pradesh, we have compiled a list of Pachmarhi’s must-see tourist places, which will leave you with a lifetime of fond memories and stunning sights.

Pachmarhi is a location blessed with a number of stunning waterfalls in the area. Bee Falls is widely considered to be among the most photogenic waterfalls in the Pachmarhi region. For those interested in a better understanding nature, also known as Jamuna Prapat, it is an absolute must-see.

Bee Falls is well-known not just for its visual beauty but also for the fact that it is the source of water for the whole town of Pachmarhi. A waterfall tumbling down a steep valley is a sight to see.

After taking a short ride on local transportation, such as a Jeep, visitors must make their way down steep set stairs to reach Bee Falls. Caution is advised since the stairs are not kept in good condition and might become slick during the rainy season. It is not recommended for young children or elderly people.

See also: Places to visit when in Gwalior 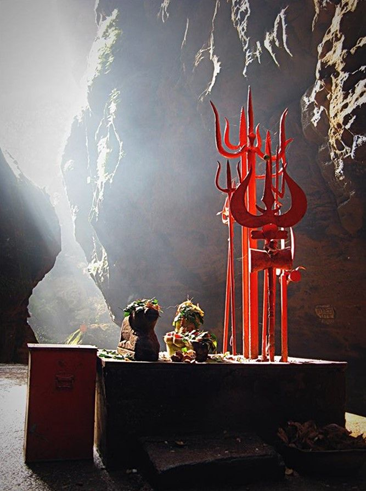 The Jata Shankar Caves are revered as holy because it is believed that these caves location where Lord Shiva escaped from the rage of Bhasmasur while the latter was chasing after him.

It is said that the caverns have a natural Shivalingam hidden in the shade of a large rock. Additionally, the stone formations in the cave are said to resemble the fabled hundred-headed serpent Seshnag. The name of these caves comes from the fact that their granite structure looks like the matted hair of Lord Shiva. For enthusiasts, a trip to these caverns is an absolute need.

To reach the cave temple, located 1.5 kilometres away from the Pachmarhi Bus Station, visitors must first trek around one kilometre and then descend a total of 150 stairs. 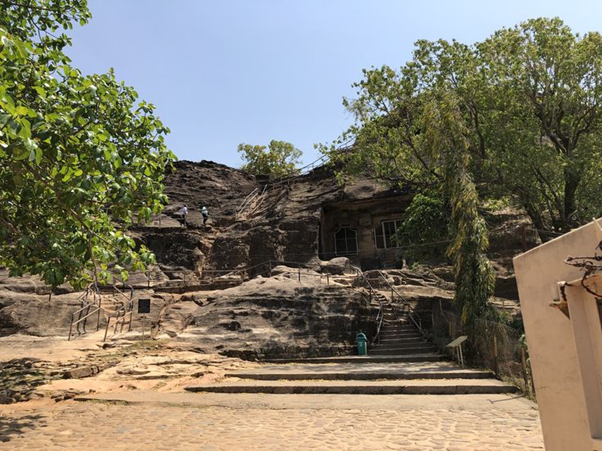 The Pandava cave is home to many Buddhist temples intricately carved out of the surrounding rock. For travellers who come to Pachmarhi and are interested in seeing locations with significant religious meaning, this is among the fascinating sights they may see. In addition, the Satpura hills provide a breathtaking background for the caverns.

Mythology has it that when the five Pandavas were banished from their homeland, these temples served as a place of refuge for them. Because of this, the area became known as the Pandava caves. The temples were constructed in the ninth century and had some stunning artworks and embellishments throughout their interiors.

Pandava caves are located 2 km from the Pachmarhi bus station, and you can either reach the caves by walking or boarding a local bus that is readily available between the two points. 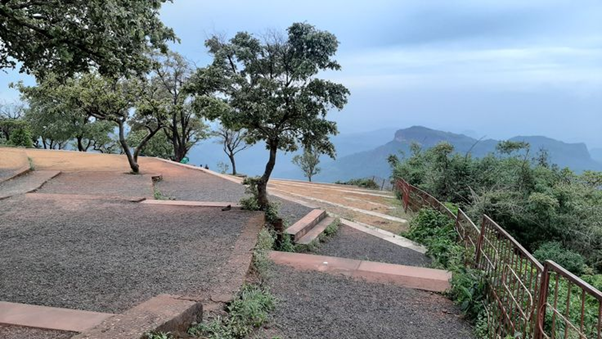 It stands at 1352 metres and is the highest peak in the Satpura Ranges. This location is famous among travellers and locals alike for its breathtakingly beautiful view of both the dawn and the sunset. Aside from it, one may view the town illuminated when it is nighttime there. For visitors to soak in the scenery, they may either drive there or hike up the hill.

The Pachmarhi Bus Station may be reached from Dhoopgarh by travelling a distance of 11 kilometres. Hiring a vehicle and then continuing on foot is the only option to get to Dhoopgarh. Nevertheless, the trail might be challenging because it passes through several valleys and waterfalls. 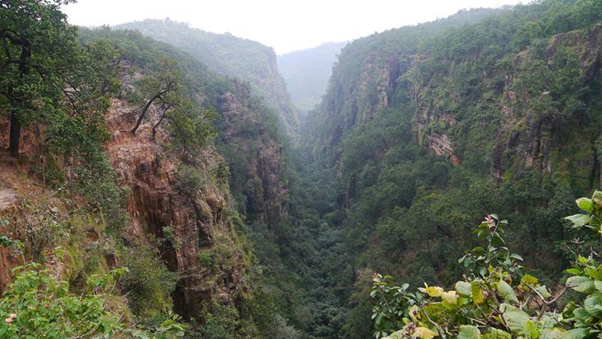 Another well-known tourist destination in Pachmarhi is the area known as Handi Khoh, which is characterised by its picturesque hills and green woods. The two enormous hills that formed it produced a ravine in the shape of a V about 300 feet deep.

The locals claim a lake once existed here, but it dried up due to the fury of a massive snake that was supposed to be a guardian of this area. Hiking, horseback riding, and other outdoor activities are available at this location for travellers.

You can reach Handi Khoh by local bus and it will take you around 10 minutes to reach there since the distance between the Pachmarhi bus station and Handi Khoh is only five km. 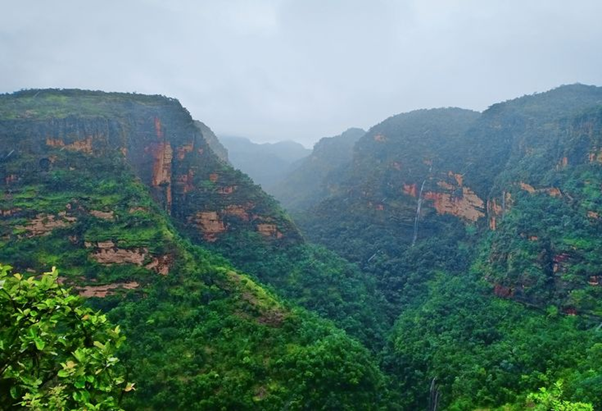 If you are searching for a tranquil and exciting spot, Mahadeo Hills is your best bet by far. The Mahadeo Hills are a massive sandstone hill that rises to a height of 1,363 metres and offers visitors a breathtaking panorama of the surrounding woodlands and valleys. In addition, it is well-known for being the location of an ancient Shiva temple and for boasting a few native caverns. Are you looking to spend some time near a picturesque waterfall with falling water? You may easily get to the Duchess falls at Pachmarhi. Because it is just about 4 kilometres off the main road, The Duchess Fall offers excellent access to the surrounding area.

This Pachmarhi place to visit is a breathtaking waterfall that plunges from an altitude of one hundred metres. If you consider yourself a nature lover, you cannot miss the opportunity to go there. 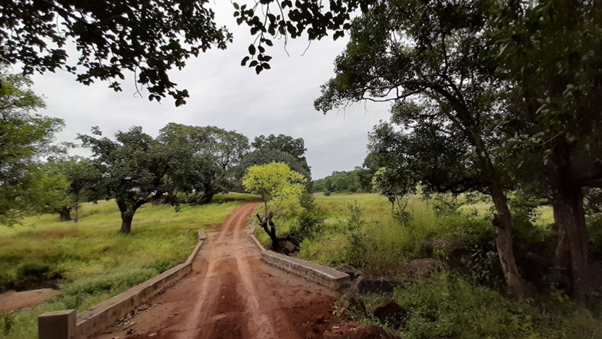 The Denwa River winds its way through the middle of this national park, which has a picturesque panorama that spans a huge region. During the safari, each passenger must go across the river, and they must ever do it on elephants or a gipsy. It is among the most popular vacation spots among those who like being outdoors and seeing animals. This national wildlife sanctuary has been honoured with some major prizes in recognition of its work to conserve and safeguard endangered species.

The Satpura National Park may be reached quickly and simply by air travel. It is surrounded by four major airports, so there is a good chance to arrange a direct flight connection to an airport that is nearby and then continue your trip by taxi. The airport in Bhopal is the one that is closest to it (170kms). This holy site is perched at an impressive height of 1,326 metres above sea level. During your time in Pachmarhi, you should pay a visit to the Chauragarh Temple, among the many religious sites in the area. Locals attest that this ancient temple, encircled on all sides by beautiful valleys and majestic hills, is devoted to Lord Shiva. The temple dates back many centuries.

A Dharmashala, the major temple, and a freshwater pond may be found at the top of a total of 1,300 stairs that pilgrims must climb to get there. This steep road is regularly used by devotees during holidays like Nag Panchami and Maha Shivratri to carry heavy-weight Trishuls as part of ceremonies. 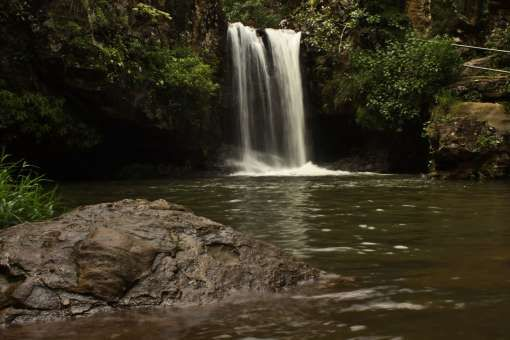 Apsara Vihar is a beautiful and peaceful waterfall that can be found tucked away in the depths of the Pachmarhi forest. It has a drop of around 30 feet and creates a pool of icy water at its base. Travellers and people out on picnics frequent this spot since it is among the favourite attractions to relax and unwind from the monotony of their day, enjoy some time playing in the water, and take in the natural beauty of the area.

To get the greatest view of the waterfall, one must walk 1.5 kilometres in a downward direction along a route three kilometres away from the Pachmarhi Bus Stand. 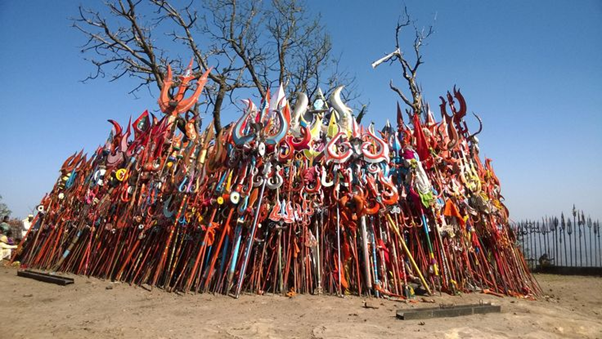 The Bada Mahadev cave in Pachmarhi is a temple dedicated to Lord Shiva and has statues of Vishnu, Brahma, and Ganesh. The cave is located amid Pachmarhi’s untamed natural surroundings. It is said that Lord Vishnu slew the monster Bhasmasura within the cave that is around 60 feet tall. Within the cave, freshwater streams create a sacred pool, and it is believed that soaking in this pool would cleanse one of their sins.

To access the main cave, devotees must travel 11 kilometres from the Pachmarhi Bus Station and walk 300 metres down a route that has been carefully laid out from the parking lot. 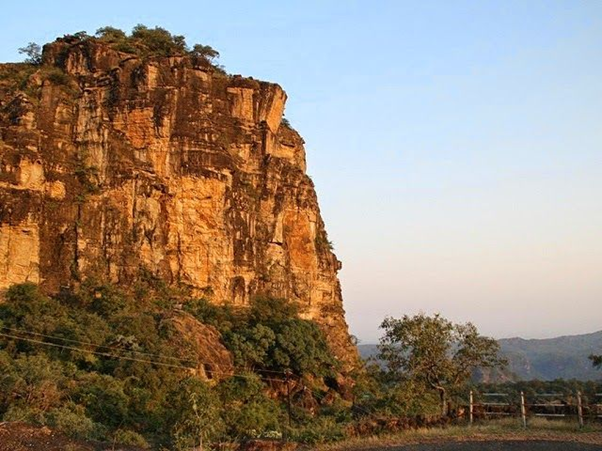 The name “Reechgarh” was given to a massive cave that can be found deep under the crevices of the Pachmarhi hill and is associated with local folklore. According to the legend, this cave was formerly home to a gigantic bear, referred to as a reech in Hindi. The path that leads up to the cavern is blanketed with verdant vegetation, and the caves even serve as ideal chillers owing to the breeze that blows through them.

The Pachmarhi Bus Station may be reached from Reechgarh by travelling five kilometres. It is necessary to climb over and around the stones to access this area. And to emerge from the other side, one is required to go through a confined canyon that was once occupied by a stream.

Christ Church is a prime example of British colonial style, and it maintains its imposing height despite being surrounded by verdant foliage and towering trees. You will feel like you have stepped back in time as soon as you see the towering spire, stone building, and Belgian glass windows of the protestant church. It has managed to preserve the allure of a bygone era. There is a tiny cemetery on the grounds, with tombstones holding inscriptions that date from the 1800s up until the World Wars. You will find this church at a walking distance of 1 km from the Pachmarhi bus stand.

Why should you visit Pachmarhi?

Pachmarhi’s mild climate and breathtaking landscape make it a popular tourist destination all year long. The hill station is a thousand times more stunning during the monsoon and winter.

How many days would you recommend spending in Pachmarhi?

Pachmarhi may be explored in three to four days at most. There is a lot you can do in the Satpura range if you are going to be there for five or six days during your holiday.

Is the month of December a good time to go to Pachmarhi?

The month of December is characterised by very chilly temperatures in Pachmarhi. The snowy and icy conditions may cause your trip plans to be derailed. However, if you don’t mind the chill; you can always go to the hill station.

Which mobile network do you recommend using in Pachmarhi?

Pachmarhi is best served by Jio, followed by Vodafone, Airtel, and Idea in terms of coverage.

7 amazing places to visit and things to do in Meerut