Places To Visit In Vindhyachal

The holy town of Vindhyachal is in Mirzapur district in Uttar Pradesh, on the banks of the river Ganga. The spirituality of this location draws people in large numbers as it is well known as a pilgrimage site for the magnificent goddess Vindhyavasini.

Since Vindhyachal was first referenced in the ancient and sacred Hindu text known as the Puranas, it has always been a centre of religious observance and devotion. The Hindu goddess Durga, after defeating the demonic Mahishasura, is said to have made Vindhyachal her permanent residence. Vindhyachal is home to a wealth of tourist attractions, reflecting its rich past and culture.

How to reach Vindhyachal?

The airport closest to Vindhyachal is located in Varanasi, which is around 90 kilometres away. There are several flights inside India that depart from Varanasi and land at other major airports. Several flights are arriving and departing daily from Delhi, Mumbai, and Jaipur. Taxi services between the airport and Vindhyachal are easily accessible.

About 90 kilometres separates Vindhyachal and the closest major railway station, which is Varanasi junction. The railway station offers convenient connections to all India’s main cities, including New Delhi, Kolkata, and Mumbai. The Vindhyachal station within the city, however modest, also serves the heavily travelled Delhi-Howrah routes. Another alternative is Mirzapur station which is nine km from Vindhyachal.

National Highway 2, often known as the Delhi–Kolkata Road, is the most direct route to Vindhyachal from the Indian cities of Delhi and Kolkata. Additionally, regular bus services run between Vindhyachal and the cities of Varanasi, Prayagraj and other major cities. 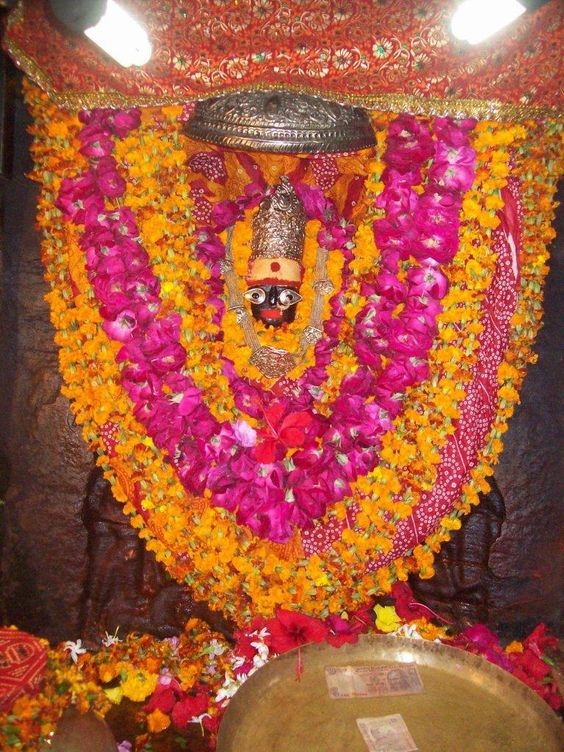 The well-known temple in Vindhyachal is devoted to an incarnation of the goddess Durga known as Vindhyavasini. It is believed that bathing in the Ganges River, which is next to the temple, is an act that would cleanse a person of their sins and bring them closer to God.  The temple dedicated to the goddess is magnificent; the image of the Devi riding on a lion has been carved into a piece of dark stone and looks simply stunning.

Other statues depicting other deities from Hinduism may be seen adorning the premises of the temple. This is one of the well-known destinations in Vindhyachal, and as a result, it is often quite packed throughout the year.

Vindhaychal is home to many temples, the most notable of which is the Laki Khoh Temple. This temple is situated in a cave within the Vindhyachal mountain ranges and is at a distance of two kilometres from the Vindhyavasini Devi Temple.

Thousands upon thousands of worshipers make their way to this location every year in the hopes of gaining the favour of Goddess Kali, an incarnation of the goddess Durga. This shrine dedicated to Kali Maa is stunning, and the temple that houses it is amid verdant trees with mountains in the background.

It is stated that the temple is home to a large number of tantriks, who can treat illnesses and provide guidance to devotees who pay a visit to both them and the temple.

A visit to Vindhayachal, home to some of the most stunning temples in the world, will leave visitors with a more spiritual disposition. This town is home to a revered temple known as the Ashtabhuja Temple, which is devoted to the goddess Saraswati.

Ashtabhuja is another name for Saraswati. It is believed that Lord Krishna’s sister was cornered by the villain Kansa, and to free herself from Kansa’s grasp, she ran away from the scene and sought refuge at this very spot amidst the Vindhyachal mountain ranges, which is the exact location where the temple has been built.

Triloka Parikrama, which is going around the whole temple three times, is a practice performed by a significant number of devotees who visit this temple.

The Ramgaya Ghat, only two kilometres outside Vindhyachal city, is a popular and holy pilgrimage site. It is stated that Lord Ram prayed for his father and conducted specific rites here after his death. This is the location where the prayers were given. This ghat is known for its tranquillity, and immediately next to it is another ghat known as Pret Shila.

At Pret Shila, people gather to pay their respects to their ancestors who have passed away and hold funeral rites in their honour. The fact that the Rameshwar Mahadev Temple can be found in such proximity to this ghat not only contributes to the serene atmosphere of the location but also makes it seem more spiritual.

There is a fascinating tale connected to Sita Kund, a lake found in the Vindhyachal Mountains’ foothills. This historical natural spring dates back to the period of the ancient Indian epic known as the Ramayana. According to a local legend, Lakshman is the one who is responsible for the creation of this Kund. Sita had wanted to drink some water while they were returning home after their win in Lanka, but none was available.

When Lakshman saw this, he fired an arrow into the earth, and shortly thereafter, a stream of water burst out of there. This stream of water is now known as Sita Kund, and it was caused by the arrow. There are many temples situated close to the Kund, which contribute to the overall attractiveness of the region. The Sita Kund and the other temples in the area are popular attractions for the numerous visitors that make the trip to this location.

Vindhyachal is home to many important religious sites, including the Sita Samahit Sthal, associated with the Ramayana epic. The most devoted Hindus consider this to be one of the most important temples in the world. It is thought that Sita went into the ground, into the earth, anytime she wanted to when she was living with Valmiki, the author of the Ramayana.

This location is the exact position. A temple has been constructed precisely here, and it may now be found nestled among the verdant surroundings of Sitamarhi. This temple is an important stop on the pilgrimage to Vindhyachal Dham and is known for its history and architecture. If you are making a pilgrimage to Vindhaychal as part of your Dham Yatra, you are obligated to pay a visit to the Sankat Mochan Hanuman Temple, one of the most well-known temples in the area. This ancient temple is devoted to Lord Hanuman. It is unknown when exactly this temple first opened its doors, but it is known that devotees have been coming here for a very long time to offer prayers. It is a marvel that the statue of Hanuman has been seen to grow a few inches every year. This phenomenon has been observed. As a result, many who frequent this temple have a strong faith in this particular God. The stunning Rameshwar Mahadev Temple in the Vindhyachal mountain ranges is exactly in the middle of the Vindhyavasini Temple and the Ashtabhuja Temple. It is located close to Sita Kund. This temple can be found within walking distance of the Vindhyachal town centre and is about eight kilometres from Mirzapur. This temple is dedicated to Lord Shiva, and inside the temple itself is a sizable Shiva Ling that was built.

The Rameshwar Mahadev Temple is the third and final pillar of the Great Triangle Temple Pilgrimage in Vindhyachal, which is one of the most important religious destinations in India. Even though it is busy in the temple for most of the year, the surrounding region maintains a sense of calm and serenity. 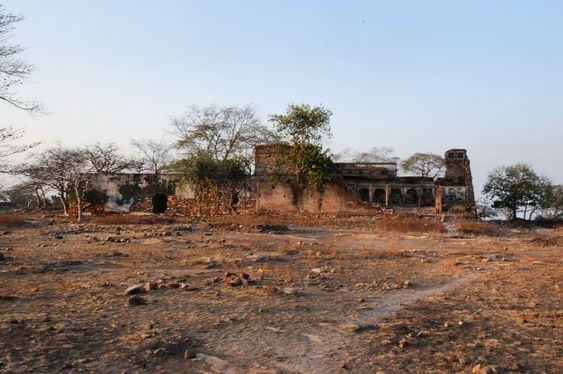 If you have finished seeing all of the temples in the area, you should go to the Vijaygarh Fort, located in the Mau Kalan hamlet of the Vindhyachal district. This fort is approximately 400 feet in height and is completely covered in vegetation, projecting an impression of the prosperous past. In the 5th century, the hills of the Kaimur mountains were chosen as the location for the construction of this fort.

As soon as you step foot inside this fort, you will be transported back in time thanks to the many cave paintings, carved figures, and rock formations on display here. You must go to this location if you have any interest in the history of the area. Not only does it provide a wealth of information on the past, but it also exudes an air of serenity and composure. 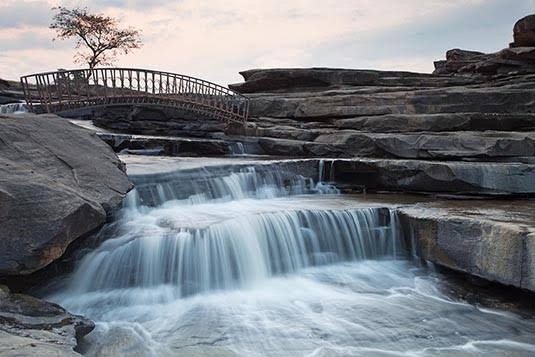 The Wyndham Falls is on the outskirts of Vindhyachal and provide a nice change of pace from the city’s many temples. This is the perfect place to come to relax, recharge your batteries, and get in touch with nature. Wyndham Falls has a calm current of water and is encircled on all sides by large trees; owing to the stunning scenery, this location sees the most number of visitors during the monsoon season.

In addition, there is a zoo and a children’s park located in the neighbourhood for the enjoyment of your family. Wyndham Falls guarantees its guests a relaxing and enjoyable experience.

Why is Vindhyachal so renowned?

Vindhyachal is home to the most well-known temple in the area, devoted to Vindhyavasini, an avatar of the Hindu goddess Durga. This temple is revered by its worshippers, with many devotees bathing in the Ganga River immediately next to the temple since it is believed to be sacred and capable of washing away all sins.

The shrine is considered to be one of the holiest Shakti Peethas in all of India. The Vindhyavasini Devi is also sometimes referred to by the name Kajala Devi.

How can I go around Vidyanchal?

Vindhyachal is a well-known pilgrimage site to which many devotees go. Aside from this, Vindhyachal’s proximity to the large city of Mirzapur, which is just 8 kilometres away, affords its visitors convenient transportation alternatives.

When would you say is the perfect time to go to Vindhyachal?

Top 15 places to visit in Kedarnath

Places to visit in Yercaud and things to do

Places to visit in Yercaud and things to do