Inside Buckingham Palace: Costliest house in the world

Queen Elizabeth II, UK’s longest-serving monarch died on September 8, 2022 at Balmoral at the age of 96 years, after reigning for 70 years. Post her death, as per centuries old tradition, her son King Charles succeeded the monarch.

No matter how many stately mansions and gorgeous tower-blocks oligarchs and billionaires construct throughout the globe, none of the properties will ever sell or match for more than the Buckingham Palace, the official residence of the British monarch.

The royal home in central London has topped a list of the world’s most valuable properties, worth more than £4 billion in 2022. The costliest house in the world, this 18th-century mansion brushed off contest from the ultra-modern Antilia tower in Mumbai, India, which is owned by Indian tycoon Mukesh Ambani and Villa Leopolda, the luxurious residence of Russian billionaire Mikhail Prokhorov on the French Riviera’s Cote D’Azur.

A brief history of the costliest house in the world George III acquired Buckingham House for his wife, Queen Charlotte, in 1761 to serve as a decent family house near St. James’s Palace, where numerous court events were conducted. Upon becoming King in 1820, George IV began the process of converting the home into a palace with the assistance of architect John Nash.

However, the King insisted on a more realistic budget of £450,000, which was eventually agreed upon by the House of Commons. To increase the size of the main block, Nash introduced a large suite of rooms on the garden side of the building, facing west. The outside of the building, faced with mellow Bath stone, represented the French neoclassical influence that George IV favoured. Located on an enormous 829,000 square feet site, the Buckingham Palace has 775 rooms in all, including 19 staterooms as well as 52 royal and guest bedrooms. There are 92 offices, 78 baths, and 188 bedrooms for the household staff. A church, a post office, an indoor swimming pool, a staff cafeteria, a doctor’s office and a movie theatre are just a few of the amenities that make it seem like a self-contained community.

Inside the costliest house in the world 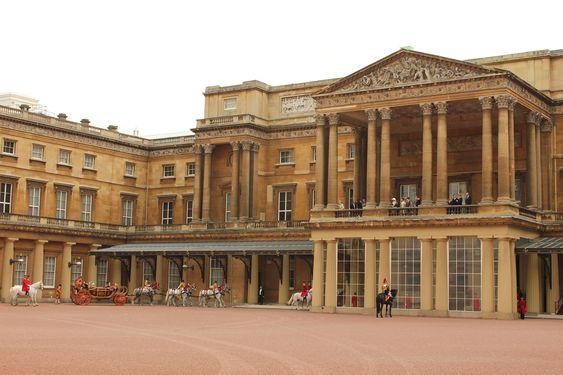 The grand entrance is located inside the Quadangle of the inner courtyard. It is through here that the Queen leaves and enters the Palace. Visitors for major events are also shown to the grand entrance before entering the Grand Hall. Every year, the Queen hosts nearly 30,000 guests in the costliest house in the world, which takes place in the expansive garden at Buckingham Palace’s rear. On the 39 acres of the gardens, you’ll find more than 350 different kinds of wildflowers, 200 different kinds of trees and a three-acre body of water. The Grand Staircase, which leads to the State Rooms above, is one of the first sights visitors notice when entering the Palace. The stairwell is lined with red carpet and the walls are adorned with historical images of members of the British royal family. The viewpoint of Buckingham Palace that most of the world is familiar with is the one facing the East Facade, where the Royal Family appears on the balcony off of the Centre Room on major occasions. The Centre Room in the costliest house in the world is located behind the balcony, also known as the Chinese Lunch Room, since it is furnished with Chinese regency furniture. The Yellow Drawing Room was decorated with yellow silk before Emperor Napoleon III, and his wife Eugenie arrived in 1855. It has a balcony and was built for Queen Victoria to host parties. A personal audience with the Queen takes place in this magnificent parlour at Buckingham Palace. Her Majesty’s family photos are displayed in the backdrop while she receives visitors in this area, which features walls painted a pastel blue and dark oak floors. This magnificent ballroom, which serves as the venue for official dinners, has lofty ceilings, vivid red carpets and massive artworks adorning the walls. Additionally, the ballroom serves as a venue for investiture ceremonies, which are performed by the Queen and other senior royals, including the Duke of Cambridge. The 1844 Room, one of the Palace’s 19 staterooms, is often used by Her Majesty when she has audiences with foreign leaders and other prominent visitors at Buckingham Palace. Featuring opulent marble blocks and gold mirrors hanging on the walls, as well as classically patterned carpets and blue and gold chairs, the great room is nothing less than a showpiece. The Music Room at Buckingham Palace has played host to several major royal occasions, including the christenings of Prince Charles, Princess Anne and Prince Andrew, as well as the wedding of Prince William to Kate Middleton. The Throne Room, perhaps one of the most recognisable chambers in Buckingham Palace, has hosted a variety of events, including balls and investitures, as well as official wedding pictures after Prince William and Kate Middleton’s royal wedding. The Royal Collection’s finest works of art may be seen at Buckingham Palace’s Picture Gallery. For the King’s art collection, the 47-metre chamber was created. Currently on display are paintings by Italian, Dutch and Flemish artists, mostly from the 17th century. Titian, Rembrandt, Rubens, Van Dyck, and Claude Monet are among the painters that are represented.

Buckingham Palace: 5 amazing facts you may not know about the costliest house in the world The Palace has more than 700 rooms

Over the years, Buckingham Palace has welcomed many thousands of visitors. It’s easy to understand why with a total of 775 rooms. In all, there are 52 royal and guest rooms, 188 staff rooms, 78 baths, and 19 staterooms.

The Palace is home to more than 800 members of staff

The ballroom isn’t simply filled with the Queen of England. The Duke and Duchess of Cambridge, and their children, live there. With the royal household, there’s a casual 800+ staff members that also call the costliest house in the world their place of residence.

John Nash, a renowned architect, renovated the original Buckingham House into its current shape. Buckingham Palace by Nash was universally considered a masterpiece, but at a price. By 1828, Nash had overspent his budget by £496,169 on the building’s renovations. For overspending, Nash was quickly sacked following the death of George IV.

The castle was bombarded nine times during the Second World War, which began in 1939. When the Palace Chapel was demolished in 1940, it was the most publicised occurrence. Cinemas around the United Kingdom showed this incident to demonstrate the plight of both the affluent and poor.

The royal family’s preferred bank, Coutts & Co., has placed an automated teller machine (ATM) in the basement of Buckingham Palace. A post office, a movie theatre, a café, and 78 restrooms round out the list of available services.