Gwalior is rich in history and home to several stunning temples and monuments. For those interested in Gwalior’s rich legacy, there are many historical and cultural sites to see.

While Madhav National Park allows you to get lost in the woods, the magnificent Gwalior Fort provides a breathtaking perspective over the city.

By air: The Gwalior airport is 8 kilometres from the city’s centre. From Gwalior, you may fly to several significant cities, including Mumbai, Delhi, Goa, Hyderabad, Kolkata, and others. Gwalior Airport is the closest airport.

By Rail: People may easily travel to Gwalior to enjoy the region’s rich legacy thanks to the station’s excellent connections to all major cities and towns. The city’s centre is where the train station is located, making it quick and easy for visitors to get everywhere they want to go.

By Road: State buses, deluxe buses, tourist buses, and private buses are among the options for getting to Gwalior. Buses are readily available from Gwalior to Indore (169 km), Kanpur (265 km), Delhi (319 km), and Jaipur (348 km).

Additionally, other additional tourist destinations draw thousands of people each year. It is the ideal place to explore with friends, family, a partner, or even by yourself.

Visitors will be overwhelmed by the options available to them in Gwalior. Now let’s explore the list featuring 15 Gwalior tourist places.

Tansen was one of India’s best musicians and a prominent vocalist in Akbar’s courts throughout the Middle Ages. He was also one of the Mughal court’s nine pearls.

According to legend, Tansen could summon magic, bring forth rain, and even captivate animals with his song. He learned Hindustani classical music from Mohammad Ghaus, a teacher who was his teacher.

He created the Gwalior Gharana musical genre and supported the Dhrupad style. He was laid to rest at a spectacular architectural memorial place close to his mentor. Every year in November, the Tansen Music Festival is held here, attracting well-known artists from all around the nation to play in a variety of classical performances. The Gwalior Fort, one of the most formidable fortifications in all of northern and southern India, was referred to by Mughal emperor Babur as “the jewel among fortresses in India.” It is a location you really must see.

This towering building, located on top of a sizable rocky mountain close to Gwalior in Madhya Pradesh, central India, dominates the whole city.

Evidence reveals that it has existed since the sixth century and is an essential component of the city’s character and architecture. It is also the location of the second-oldest known reference to the number “zero,” which was discovered as a sculpture within a temple on the fort’s summit. The zoo has been designated as a protected site; it stretches to eight hectares of land and is cared for by the Municipal Corporation of Gwalior due to the presence of rare kinds of wild animals there.

The Prince of Wales officially opened the Phool Bagh about a century ago, and it is still well-kept and protected today, including the provision of nice, clean abodes for the animals. A mosque, gurudwara, prayer hall, and theosophical lodge are also located in the Phool Garden.

It is also a desirable location for enthusiasts who want to observe wildlife in the city, including endangered animals like the white tiger and rare, protected species. You will be awed by this beautiful temple’s exquisitely crafted artwork. The highest building in the fort is a Hindu temple that combines elements of South and North architectural traditions. Lord Vishu is the patron deity of this temple. Before the British captured this fort, this temple was used to refine oil, thus the name Teli Ka Mandir. One of the best attractions to visit in Gwalior is the twin temple known as Saas Bahu Temple, often referred to as the Sahastrabahu Temple or the Harisadanam Temple. It was built in the 11th century. Vishnu is known as “Sahastrabahu” in Hinduism. The walls of the 2 temples, which are next to one another, are each covered with elaborate carvings and sculptures. Suraj Kund is a tank in the Gwalior Fort in the city of Gwalior. It is thought to possess magical abilities. The water in the tank serves as a therapeutic liquid that is said to treat chronic illnesses.

The Suraj Kund’s surroundings are exceedingly beautiful and beautifully kept, which entices visitors to stay for a long period. It was built in the fifteenth century. The sunset and sunrise in Suraj Kund are notable.

Numerous tourists are drawn to Suraj Kund because of its historical value. There is a lot of tranquillity there. According to history, Suraj Sen, the discoverer of Gwalior, was healed of his leprosy after ingesting the pond’s water. One of the most impressive temples and works of architecture in Gwalior is the Surya Mandir, often known as the Sun Temple. The temple was built in 1988 by renowned businessman G.D. Birla and is devoted to the revered Sun God, as its name indicates.

The Sun Temple’s red sandstone façade is constructed in the form of gradual slots that rise to the pinnacle of the facade as you approach the outer building.

The temple contains a magnificent idol of the Sun Lord. Despite its recent construction, it is one of the most respected temples in the historic city, drawing numerous travellers and followers from around the nation. A group of 200 Hindu temples and their ruins are enclosed by the historic citadel Padavali, which is around 40 miles from the heart of Gwalior. The walls of the temples are ornately carved with decorations.

This location is also known as a “little Khajuraho” since one of them even features sensual carvings and sculptures. These temples’ structures are examples of post-Gupta and early Gurjara-Pratihara architecture. For couples, this is among the most fascinating Gwalior tourist places. The museum was constructed in the European style and is a stunning palace. The glass furniture and model train shown in the dining area are the museum’s highlights.

The Scindia Museum also displays manuscripts, sculptures, coins, paintings, and weaponry from that period in addition to these. 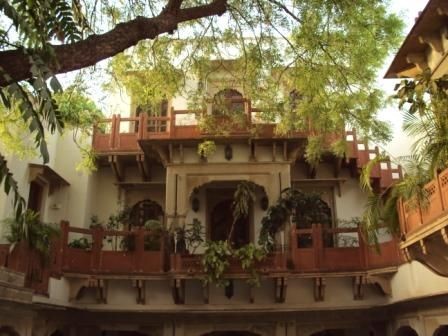 For everyone who loves music, Sarod Ghar is one of the top tourist destinations in Gwalior. This location, which is within Ustad Hafiz Ali Khan’s ancestral home, is where you may find vintage instruments that legendary artists have played.

Visit this renowned museum in Gwalior if you want to learn more about Indian classical music. You may also look at historical records and photographs of musicians. 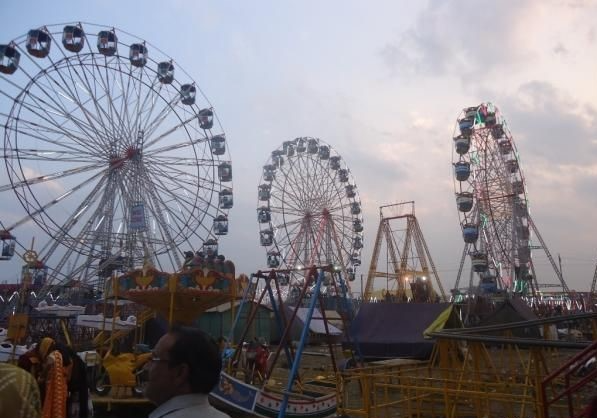 This trade fair, among the biggest in Madhya Pradesh, was established in 1905 by Maharaj Madhav Rao Scindia, the monarch of Gwalior. The 110-year history of the Gwalior Trade Fair is a unique fusion of commerce and art.

The fair is located at the Mela Ground on Race Course Road and spans 104 acres. Clothes, electric equipment, ceramics, and even livestock are sold. The Patankar Bazaar, which is mostly famous for stone carvings, handicrafts, artefacts, and more, is another location to visit in Gwalior. These items are ideal as gifts for your family and close friends.

Additionally, several food stores serve regional cuisine. One of these will be imerti, a delicious dessert to taste, coated in sugar syrup. In addition to this, you may discover textile stores that sell a wide selection of clothing at affordable costs. Her Samadhi is a well-known landmark and was constructed in Rani Lakshmi Bai’s honour, the Warrior Queen of Jhansi. The site also has a magnificent Rani Lakshmi Bai metal statue that is 8 metres tall, in addition to the Samadhi. Every year in June, there is a fair held there in the Queen’s honour. It is the ideal attraction for those who love history. The rock-cut Jain monuments from the seventh and 15th centuries are what make Gopachal Parvat noteworthy. The monuments honour Adinatha, Mahavir, Neminatha, and Rishabhanatha, four Jain Tirthankaras, whose statues may be seen in a meditation position. They are one of 100 monuments that are scattered across the city. 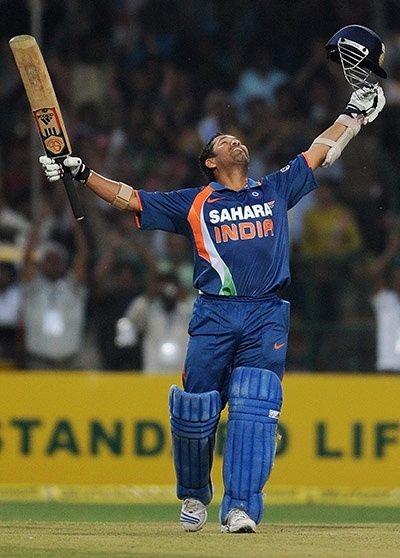 The Roop Singh Stadium, which bears the name of the great hockey player, is one of the most well-liked tourist attractions in Gwalior. The inaugural one-day international event was held at this museum in 1988 after it had been founded in 1978.

In Gwalior, there is a renowned cricket venue called Roop Singh Stadium, which draws a lot of cricket-obsessed foreigners.

The Roop Singh Stadium’s most recent cricket match was between South Africa and India in 2010. To make the most of your vacation, go to this renowned Gwalior tourist place.

What time of year is ideal for visiting Gwalior?

The months of October through March are ideal for travel to Gwalior. For those who don’t mind little rain, July through September is also a good time to go. If you want to take in the Indian classical music concerts, the four-day Tansen Music Festival in November and December is also an excellent time to go to Gwalior.

What is renowned about Gwalior?

Traditional gifts from the state of Madhya Pradesh are a speciality of Gwalior. Numerous stores that sell a variety of art and craft items can be found at the Patankar Bazaar and close to Lashkar. Popular items include wall hangings, handwoven rugs, lacquerware, dolls, and jewellery.

For Gwalior, how many days are sufficient?

Two to three days are sufficient for sightseeing in Gwalior. In around three days, you may visit all the locations, including Jai Vilas Palace, Gwalior Fort, Sun Temple, Tighra Dam, and many others

Unique Ways To Use Signage To Promote Your Brand

Qatar places to visit and things to do