Places To Visit In Mahabaleshwar And Things To Do

Mahabaleshwar is the most well-known hill station in the Sahyadri Mountain Ranges. It is only 285 kilometres from Mumbai and 120 kilometres from Pune. This lush picnic area is surrounded by valleys and is situated in the Satara district of Maharashtra, in the Western Ghats.

The magnificent Mahabaleshwar is made up of the settlements of Malcolm Peth, Old ‘Kshetra’ and a portion of Shindola. Due to its location as the source of the sacred Krishna River, the hill town is also a cherished Hindu pilgrimage site. The city is the ideal location for a romantic holiday because of all the picturesque viewpoints, lakes and waterfalls that surround it.

At Arthur’s Seat, Elephant’s Head Point, Babington Point, Lodwick Point and Wilson Point, you may discover the natural magnificence of this hill town. In addition to its plethora of natural resources, the city has some fine examples of British-inspired architecture from its past as their summer capital.

How to reach Mahabaleshwar

By air: The nearest airport to Mahabaleshwar is Pune (PNQ) Airport which is 77.5 km away. Other nearby airports include Mumbai (BOM) (155.1 km).

By train: Wathar, which is 60 km away from Mahabaleshwar, is home to the closest railway station. You can also go to Mahabaleshwar via train from Pune.

By road: You can fly to the Pune Airport and from there you can travel by road to reach Mahabaleshwar.

10 Mahabaleshwar places to visit and things to do

Mahabaleshwar tourist places are some of the most popular vacation destination in the state, due to the region’s good climate, tranquil atmosphere and a long list of things to do in Mahabaleshwar. Travellers from all over the world are also drawn to the magnificent Pratapgarh Fort and its historic temples.

In the Satara district of Maharashtra, around 6 kilometres from Mahabaleshwar, lies the ancient Shiva temple known as Mahabaleshwar. A symbol of the wealthy Maratha history, is the famous Hindu temple. The temple was built in the 16th century, during the reign of the Chanda Rao More dynasty and is situated in a steep area. The Mahabaleshwar Temple, also known as Dakshina Kashi, is one of the most revered Shiva temples in the nation and was constructed in the south Indian Hemadanta architectural style.

The Atma Lingam, which is 1,500 years old and is six ft tall and the Para Lingam are kept in the sanctum sanctorum. Additionally, you may see Lord Shiva’s Damru, Trishul, Rudraksha, and the statue of Nandi (the holy bull) on the premises. The Maratha King Shivaji weighed his mother Jijabai in gold that was donated for charity on a raised platform in the temple, according to local legend.

See also: Places to visit in Lonavala and things to do Arthur’s Seat, popularly known as the ‘Queen of Points’, is Mahabaleshwar’s most well-known viewpoint and is situated 1470 metres above sea level. The peak, which was once known as Madhi Mahal, has beautiful views of the ‘Bramha Aranya’ forest on one side and the deep Savitri River woodland on the other. The viewpoint is named after Arthur Malet, who, according to history, used to spend hours gazing at the Savitri River while lamenting the deaths of his beloved wife and daughter. Since they perished in the river, the location is also known as Suicide Point.

After a 30-minute walk from the parking area, you can reach the point. Along the route, you’ll pass Tiger Sprint Point, Hunter Point, Echo Point, Window Point, and Malcolm Point. As you take in the breathtaking panoramas of the magnificent valleys on either side of the point, you may also awe at the seat’s anti-gravitational phenomena. Light things dropped into the valley remain airborne thanks to the high air pressure and are at times, even propelled back upward. The extended ridge’s natural rock feature at the extreme end of the Sahyadri mountain range is where Elephant’s Head Point gets its name. The greatest viewing area in Mahabaleshwar, with panoramic views of the tranquil valley and mountains around it, it has a form that resembles an elephant’s head and trunk.

The elephant’s gap, which resembles a needle hole from a distance, is also known as The Needle Point. This region is ideal to watch the breathtaking view of sunrise or sunset. Extreme weather may be found there, ranging from summertime emptiness to monsoon season’s lush foliage. It is not just a well-liked picnic location but also a haven for wildlife enthusiasts. At a distance of 7 km from Mahabaleshwar Bus Stand, Kate’s Point and Elephant’s Head Point are the most picturesque viewpoints of Mahabaleshwar. The breathtaking Lingmala Waterfall is situated next to the forest bungalow of Lingmala on the Mahabaleshwar-Pune Road, some 6 kilometres from the main city. There are two magnificent waterfalls nearby. There is a smaller waterfall nearby that is only a 30-minute walk from the main waterfall, which is around 600 ft high. In the lush surroundings, each waterfall provides stunningly spectacular views.

The little waterfall is a wonderful location for family time outside, swimming and splashing about. Although it is unsafe for swimming, the main waterfall’s natural beauty is mesmerising. Adventure seekers can make the ascent to the main waterfall for a quick surge of adrenaline. Just 2 kilometres from the centre of the city, Venna Lake is a man-made lake that is surrounded by the scenic background of Mahabaleshwar. To provide a steady supply of water to the adjacent town, Satara’s ruler Shri Appasaheb Maharaj, a contemporary of Chhatrapati Shivaji Maharaj, constructed it in 1842. The lake is built across a vast 28 acres and has a 7–8 kilometre circumference. The lake is one of the most well-liked picnic areas in Mahabaleshwar due to its exquisite natural beauty. As you and your family take in the natural splendour of the area, you may take a boat trip on Venna Lake. 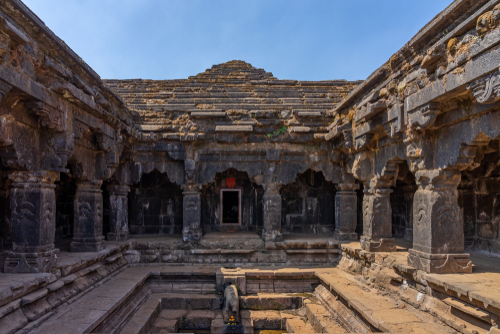 An old Shiva temple constructed in 1888 is called the Krishnabai Temple. The magnificent Krishna Valley is seen from the 1,000-year-old temple, which is situated atop the Panch Ganga temple. The large Shiva Lingam at the temple is highly loved by the people. The temple is named for the carved-stone cow, from whose mouth (Gomukh) water is said to have originated from the powerful River Krishna.

Before entering the main river, the water is gathered into a tank (kund), where it is deemed lucky by pilgrims. The temple is charming and peaceful, thanks in part to a beautiful statue of Lord Krishna. The temple’s beautifully carved ceilings and stone-carved columns serve as examples of Hemadpanthi architecture. From the temple, you may take amazing shots of the surroundings while taking in the mesmerisingly magnificent vista of Mahabaleshwar. Pratapgarh Fort is a well-known historical tourist destination and one of the top places to visit in Maharashtra. It is located on a hilltop in the Satara district of Mahabaleshwar. The stronghold is 3,500 ft above the ground and is strategically positioned. Chhatrapati Shivaji Maharaj ordered its construction in 1650, and it was finished in 1656. Four lakes, a watchtower, a library of arts and a Bhawani shrine, are all features of the Fort. Pratapgarh Fort, whose name roughly translates to ‘Valour Fort’, played a significant part in assisting the Maratha Empire in India to prosper.

To honour the Maratha warrior ruler, a 17-ft-tall monument of Shivaji Maharaj was erected in the Fort in 1957. Numerous visitors visit the citadel every year. Elphinstone Point was one of the highest vantage points in Mahabaleshwar when it was found in 1830 by Dr Murray. It provides an uninterrupted view of Pratapgad Fort, Koyna Valley on the left and the verdant environs and is around 3.21 kilometres from Arthur’s Seat. This breathtaking vantage point, where the Savitri River originates, is situated around 2,500 ft above the Koyna Valley.

It was discovered in the year Mountstuart Elphinstone served as the Governor of Bombay Presidency. A nearby historic mansion was also found but it could not be renovated, because of its poor state. You may spend the day taking in Mahabaleshwar’s ethereal natural splendour and panoramic views from the cliff. The second-highest mountain in Mahabaleshwar was named Mount Olympia. Since the Duke of Connaught visited it, it is most commonly referred to as Connaught Peak. The location, near the historic Mahabaleshwar Road at the height of around 1,400 metres, provides breathtaking views over the area, including Pratapgarh Fort, Pasarani, Venna Lake and the Krishna Valley.

Visitors and nature lovers come from all over the nation to see the breathtaking views from the peak. Trekkers and thrill seekers frequent the location. The ascent to the viewpoint is worthwhile since you may see a stunning sunrise or a magnificent sunset with the Sahyadri range as a backdrop. Tapola, known as the ‘Mini Kashmir of Maharashtra’, is a well-known satellite community of Mahabaleshwar. Tapola is well-liked by thrill-seekers and those who enjoy the outdoors. Both visitors and residents are drawn to the area by its serene surroundings and natural riches.

It is a well-liked weekend vacation spot for those seeking a connection to nature. Vasota and Jaigarh forts are also located beside a lovely lake and thick forest. By taking part in jungle expeditions and visiting uncharted islands, you may satisfy your need for adventure. One fascinating activity that is well-liked is the hike to Vasota Fort. Take a boat trip on Shivsagar Lake to get a close-up look at this intriguing location.

Is one day enough to visit Mahabaleshwar?

It normally takes two to three days, but you may prolong your trip to see surrounding attractions, including Alibaug, Satara, Pratapgad Fort and Harihareshwar. Mahabaleshwar offers a wide variety of activities to keep you busy.

What is Mahabaleshwar famous for?

Mahabaleshwar is renowned for its picturesque locations. There are numerous well-known locations nearby, including Pratapgad, Mapro Garden, and Elephant’s Head Point. From these locations, you can see picturesque sunrises and sunsets.

What time of year is ideal for visiting Mahabaleshwar?

Mahabaleshwar may be visited throughout the year but you will appreciate it the most between during the rainy season. The busiest time of year, from October through December, is when hotels and other lodging alternatives are most expensive and crowded.