Madurai is an Indian city located in the state of Tamil Nadu. The city is an important textile hub in India and an exporter of world-class cotton. The city also has a rich cultural and historical heritage which draws millions of tourists every year. The famous Meenakshi temple is an important pilgrimage site for Hindus and is renowned for its architectural value. Madurai city also has various other tourist attractions, which make the place perfect for a short trip away from big cities. If you are planning to visit Madurai, you need to create the perfect itinerary to cover all the important sites.

How to reach Madurai?

By Air: Tourists can come to Madurai by flight services. The closest airport here is the Madurai International Airport which receives a large number of flights every day. The airport is connected with all other major cities in India.

By Rail: Madurai is well connected by railways. The Madurai Junction or Madurai railway station connects the city to other parts of India. Frequent trains to Madurai are available from Chennai, Mumbai, Delhi, and Kolkata.

By road: Madurai has a good system of highways and is well connected to cities like Mumbai and Chennai. Additionally, you can also reach Madurai from other states like Kerala and Goa.

Here is a list of top Madurai tourist places which will help you have the perfect tour of the city:

The Meenakshi Amman Temple is one of the most popular Hindu temples in India. The temple is located in Madurai city and is known for its intricate artwork on the main mandapam. The temple in Madurai was constructed by Pandayan Emperor Sadayavarman Kulasekaran I. During this time, the 3 main areas of the three-storeyed gopura at the entrance of Sundareswarar Shrine and the central portion of the Goddess Meenakshi Shrine were constructed. The temple is an example of the finest forms of South Indian architecture from the 12th century. Many Hindu devotees flock to the temple to offer worship and wonder at the colourful and intricate work on the temple. The Vaigai Dam is another local favourite among Madurai tourist places.  This site is situated about 70.2 km away from the main city in a tranquil environment. You can reach the dam by taking a short ride through NH44 from Madurai. The dam was built by the government of India on the Vaigai River near Andipatti. The dam supplies water to the nearby fields for crop cultivation in Madurai. The famous cotton textile industry thrives due to the strategic location of the dam. You can travel to the dam and explore the serenity of the place. It is the perfect picnic spot for people with children, and you will even enjoy the beautiful roads on your trip to the site. Vaigai Dam is the ideal place to visit after a long day of travelling in the city. Thirumalai Nayak Palace is a work of art in Madurai city. This 17th-century old palace was commissioned in 1636 CE by King Tirumala Nayaka from the Nayaka dynasty. The palace showcases a brilliant mix of styles ranging from Italian to Rajput. The palace is located only a few minutes away from the famous Meenakshi temple and located within the city premises. You can avail public or private transport to reach the palace and explore its complex to catch a glimpse of the old royalty. The beautiful courtyard within the premises is perfect for spending some time with family and clicking some amazing pictures. Alagar Koil is located just 21 km away from Madurai city. This famous temple is one of the 108 Divya Desam temples in India. The temple is located on the foothills of the Alagar hills. An important place for Hindu pilgrims, the temple has a rich spiritual history which draws numerous tourists. This temple is also famous for its spectacular art in the form of sculptures and intricately carved ‘mandapams’. The Pandya Kings are said to have beautified and expanded the temple premises. You can take a short trip from Periyar bus stand to the temple and enjoy its beauty surrounded by nature. You can even attend the pujas offered here at fixed hours. Meghamalai is a beautiful and quaint hill station near Madurai. The town is also known as the “High Wavy Mountains”. Located in the lap of the Western Ghats  about 158 km away, this gem among Madurai tourist places is a paradise for nature lovers. The hills rise to an elevation of 1500 metres and offer some respite from the hustle and bustle of the city. The resort town is a perfect getaway for a few days if you want to enjoy the beauty of the hills. You can avail of public transport which takes people to the town through picturesque roads which should not be missed. You can stay over and enjoy the spectacular beauty of the hills and tea gardens in Meghamalai. To reach Meghamalai, you need to take a train from Madurai Junction and reach Theni Station, which is located nearby. The Gandhi Memorial Museum is located in Madurai. The Museum was established in 1959 and continues to be a top Madurai place to visit. The Museum is a memorial for the freedom fighter Mahatma Gandhi who reached satyagraha and non-violence to achieve independence for India. The Museum is one of the five Gandhi Sangrahalaya (Gandhi Museums) in the country. It was inaugurated by the then Prime Minister of India, Jawaharlal Nehru. You can take a tour of the Museum and even view the bloodstained cloth which Gandhiji had worn when he was assassinated. The Museum will give you a detailed account of his life and teach you about his philosophy. 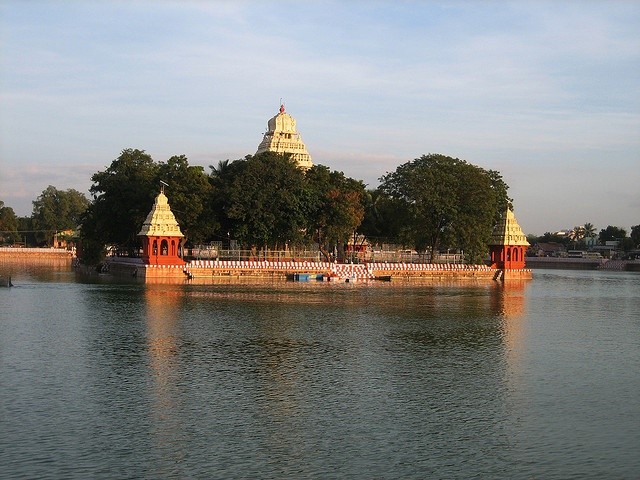 The Vandiyur Mariamman Teppakulam is a temple pond which is situated near the Vandiyur Mariamman Temple. The temple itself is only 5 km from the Meenakshi Amman Temple, so the three sites can be combined in a single day. The peaceful ambience of the beautiful sunsets draws tourists to these Madurai places to visit among others. The Teppakulam pond is mainly used for religious festivals, but it’s open to tourists who want to come and spend some time by its ghats. You can visit the two temples and then come rest at the pond for some fresh air and peace.

The Samanar Hills are situated about 10 km away from Madurai city and accessible via NH85. The hills, locally called Samanar Malai or Amanarmalai or Melmalai, feature a rocky terrain among the hills of the Keelakuilkudi village. The hills are among Madurai tourist places due to the presence of many Jain and Hindu monuments. The hill is considered a protected monument by the Archaeological Survey of India, and the government has taken extra steps to preserve it. You can travel to these hills and explore the ancient Indian art which has been carved on these rock-cut temples. Visiting these hills will be a great way to have a day trip nearby. The Arulmigu Subramaniya Swamy Temple is located in Thiruparankundram just 8km km from Madurai city. This famous Hindu temple is dedicated to the god Murugan or Subramaniya Swamy and is also known as one of the “six Abodes of Murugan”. The rock-cut temple was built by the Pandyas during the 6th century. The temple is located next to a hill and displays the unbeatable skill of Indian artisans. The carved pillars and roof of the temple showcase Indian Hindu deities who are worshipped in the temple as well. Regular pujas are carried out at the temple and can be attended by tourists. Tourists can easily reach the temple from Mattuthavani Bus Terminus. 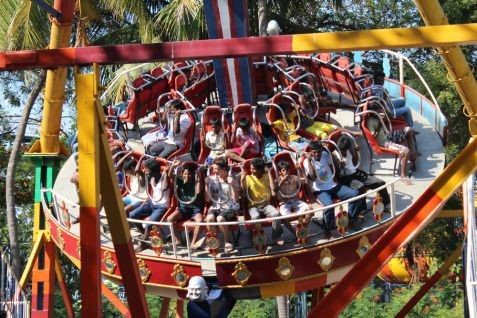 The Athisayam water and amusement theme park is located in Paravai on the Madurai – Dindigul National Highway. The park is located only 12 km from Madurai and is easily accessible by roads and public transport. The park is spread over 70 acres and features 4 games and 2 water rides. The theme park is perfect for families with teens and small children who get bored after visiting historical and religious sites. You can visit the Park to relax and unwind after a hectic tour and participate in some fun activities with your family. Madurai is an important textile centre in India. Madurai cotton is a famous fabric and is often exported to various corners of the world. Shopping in Madurai, therefore, is a must when you visit the city. You can go on a shopping spree in the local markets to buy some amazing textile products and jewellery. Additionally, you can also buy some beautiful handicraft items from local shops and take them home as souvenirs. There are plenty of malls and markets in Madurai that you can visit to buy authentic South Indian products. Madurai is a great place to explore the wonders of South Indian cuisines. The local food in Madurai is a major tourist attraction and among the top things to do in the city. You can browse through the local street food stalls and pick your favourite snacks from their exclusive menus. You can also visit the famous restaurants and eateries in the area to find gourmet South Indian cuisine which is not found elsewhere. Some of the top places to eat in Madurai are Sree Sabarees, The Banyan Restaurant, Hotel Sree Sabarees, The Chopstix KK Nagar, Annapoorna Mithai, and Bistro 1427.

Is Madurai worth visiting?

Madurai is a beautiful place which has a large number of tourist attractions like temples and hill stations. It is definitely worth visiting if you live in India.

How many days are sufficient in Madurai?

To have a comprehensive tour of Madurai, it is recommended to have at least 3-4 days in your travel itinerary.

What is there to do in Madurai at night?

Madurai has some amazing restaurants and bars which can be visited at night.