Hampi is a historical city located within Karnataka in India. The city was known to be the seat of the Vijayanagara empire which flourished here from the 14th century. Hampi used to be the second-largest mediaeval-era city in the entire world. Even though the old city is in ruins, the beautiful historical remains have been carefully excavated and included in the list of UNESCO World Heritage Sites.

You can reach Hampi:

By air: Tourists travelling to Hampi by air must first reach Hubli Airport, the nearest air link to Hampi. A short cab ride from here will take you to the old ruins. For international travellers, Bangalore International Airport is the nearest destination, and several connecting flights to Hubli are available daily.

By rail: To reach Hampi by rail, tourists need to travel to Hospet, which is only 13 km away from the city. Hospet is well connected to other parts of India via Bangalore and Mysore. Tourists can reach Bangalore from any part of India and then take connecting trains to Hospet.

By road: The best way to reach Hampi by road would be to take the NH 48 and NH50 highway from Bangalore. Alternatively, you can travel here from Hyderabad via NH167 and Raichur Road.

13 places to visit and things to do in Hampi

Tourists flock to Hampi every year to catch a glimpse of the old temples and monuments, which showcase some excellent examples of Indian artistic skills.

Hampi is the destination you should visit if you take a great interest in historical monuments and love to explore old cities. Here is a list of the best places to visit in Hampi so that you can plan your perfect travel itinerary.

Virupaksha Temple is an important Shiva temple in the city of Hampi in the Vijayanagara district. The temple belongs to the Group of Monuments at Hampi and has been recognised as a UNESCO World Heritage Site. The temple is dedicated to the Hindu god Shiva, who is also known as Lord Virupaksha at this temple.

The temple was commissioned by Lakhan Sandesha under the ruler Deva Raya II. The temple is said to have been built in the 7th century. The big temple Complex is one of the best places to visit in Hampi. The Elephant Stable in Hampi is an important tourist location that has been left almost intact even centuries after its construction. These impressive and unique structures showcase the royal life of the Vijayanagara Empire. The stables housed all the elephants of the Kings of the dynasty. The area is just outside the Zenana Enclosure and can be reached easily from this site.

These stables are considered to have been built in the 16th century and have somehow survived the Mughal attacks, which destroyed several temples and settlements in nearby areas. Tourists can take a tour of the grounds and marvel at these constructions, which are not found anywhere else. Hampi Bazaar is a unique old market settlement located in Hampi. The temple is next to the famous Virupaksha Temple and stands as one of the top Hampi tourist places within the city. The marketplace is spread over one kilometre and reflects the people’s lifestyles in the 16th century.

The market includes a series of old pavilions on both sides, which now stands barren. However, the market is open to tourists who want to visit this UNESCO World Heritage Site and explore the history of the Vijayanagara Empire. Matanga Hills is the highest point in Hampi and only 1 km from Hampi Bus Stand. The Matanga Hills is also located at one end of the famous Hampi Bazaar. The hills offer a stunning bird’s-eye view of the ruins in Hampi city. There are small temples located on the hill and it has been mentioned in Hindu religious epics like the Ramayana.

According to the old texts, the hill was the home of Saint Matanga. Tourists have to take a short hike to the hill and travel through the rugged roads which reach the hilltop. The best time to go to this Hampi’s popular place to visit would be in the evening when the sun casts a brilliant golden hue on the temple ruins. Zenana Enclosure is a sprawling compound located in Hampi city. The area is famous for housing many architectural beauties from the 15th century. The famous Lotus Mahal is situated on its premises and features two-storied arched pavilions. The Enclosure was constructed to serve as the private space for the royal women of the Vijayanagara Empire.

The Queen’s Palace is located in the middle of this area and is the largest palace base excavated in the Hampi ruins. Tourists can tour the grounds of Zenana Enclosure and witness the lost beauty of the Vijayanagara life and architecture. 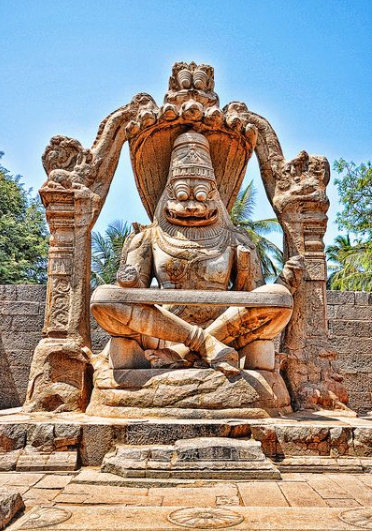 The Narasimha Temple is the largest statue in Hampi. The temple is also known as the Lakshmi Narasimha temple because the huge statue used to have the figure of the goddess Lakshmi sitting on his lap. Narasimha is an incarnation of Lord Vishu and a part of his ten avatars. The statue has been carved in the classic Vijayanagara style.

The statue belongs to the 15th century and is said to be a temple where the people actively offered worship in ancient times. Tourists can visit the temple and observe this giant statue which displays the fine craftsmanship of the Vijayanagara period. The Tiruvengalanatha temple in Hampi is dedicated to Lord Tiruvengalanatha, a form of the Hindu God Vishnu. This temple was commissioned by a high officer in Achyuta Raya’s court. The temple resides in the valley of the Matanga Hills and includes a ruined market street.

The temple is partially hidden, so this spot among the Hampi tourist places receives fewer crowds. However, the temple is a must-visit for all tourists since this majestic temple is one of the last temples to be constructed by the Vijayanagara Empire. You can easily find the location of the temple from locals and avail private taxis which will take you to the spot. 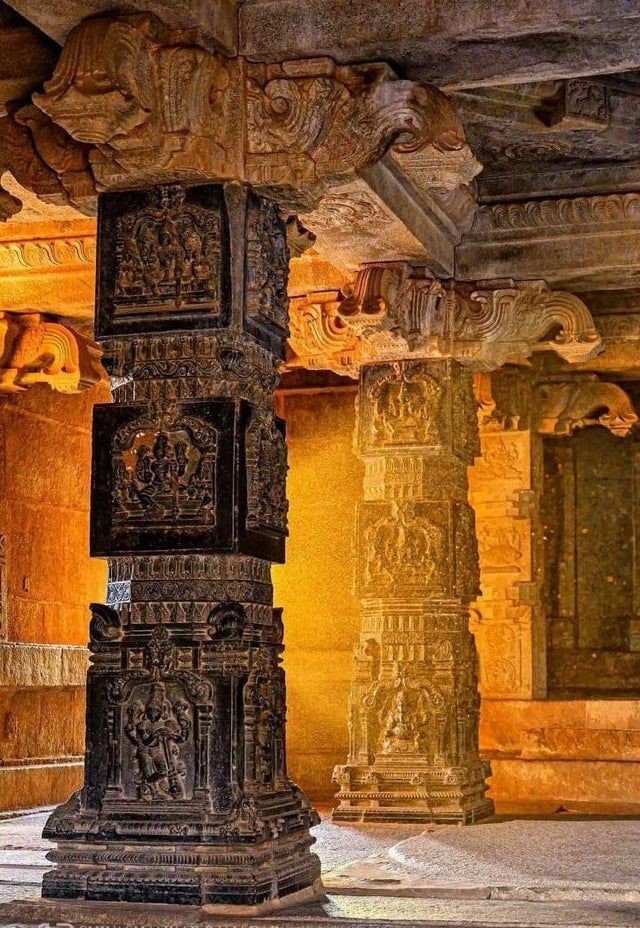 Hazara Rama Temple in Hampi is a small, gorgeous temple. The temple is dedicated to Lord Rama. It used to be the private temple of the royal family of Vijayanagara. The temple is renowned for the relics and panels that depict the story of Ramayana. It was built in the early 15th century by the king of Vijayanagara, Devaraya II. Sasivekalu Ganesha temple is built on the southern foothill of Hemakuta Hill. The temple contains a large rock sculpture of the Hindu God Ganesha and is among the top places to visit in Hampi. This monolithic statue has been carved out of a huge boulder measuring about 2.4 metres (8 feet).

An open pavilion surrounds the statue, and the inscriptions found nearby date the monument back to the 15th century. The temple was built by a trader from Chandragiri in honour of a Vijayanagara King. The temple is located in close proximity to other monuments nearby and can be combined as a part of a day tour. 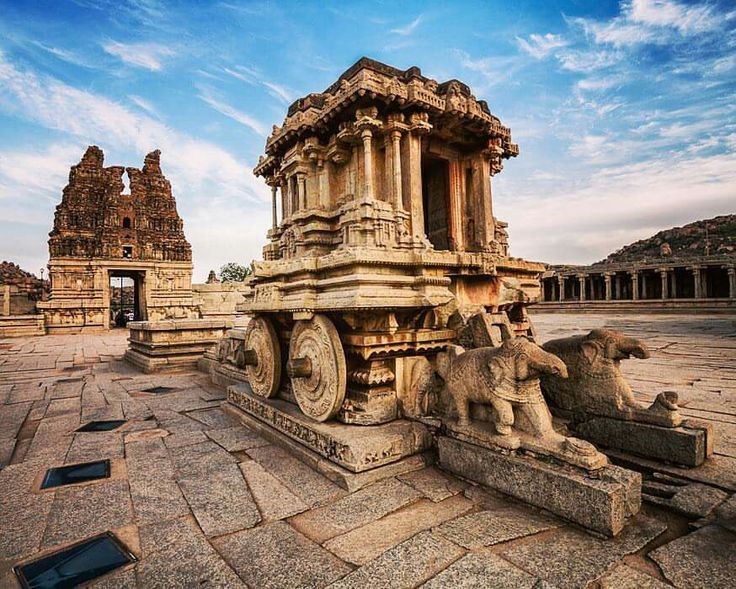 The Vittala Temple is among the most extravagant architectural beauties in the city of Hampi. The spectacular building also comes with a sprawling campus and many gateway towers. The temple is dedicated to Vittala, an avatar of lord Vishnu in Hinduism.

The temple was constructed in the 15th century AD and later further beautified by many successive kings in the Vijayanagara Empire. The striking feature of the Vittala temple is its massive stone chariot which is also an iconic structure of Hampi. Hippie Island is located on the opposite bank of Hampi. The city acquires its name from the rich hippy culture which has persisted on Hippie Island in Hampi. Many tourists come here from various parts of the world to relax and revel in the various festivities which take place here from time to time. You will also find a host of beautiful guest houses and hotels which host tourists and provide them with a detailed itinerary of the city. It is the ideal place to relax after a tiring few days of exploring the Hampi ruins. 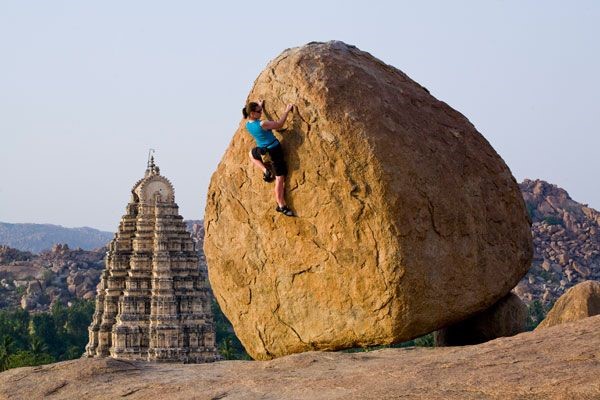 Hampi is located in a rather rocky part of the hills, which makes it an amazing location for rock climbing activities. The Rishimukh foothills, Rishimukh plateau, Lost Paradise, and Relax Boulder Area are some of the best locations for rock climbing within the city premises. You can also take lessons from guides near these centres and start acquiring the skill on the spot. A difficult but rewarding climb up the highest rocky areas will provide you with the best views of the ruined city from afar. 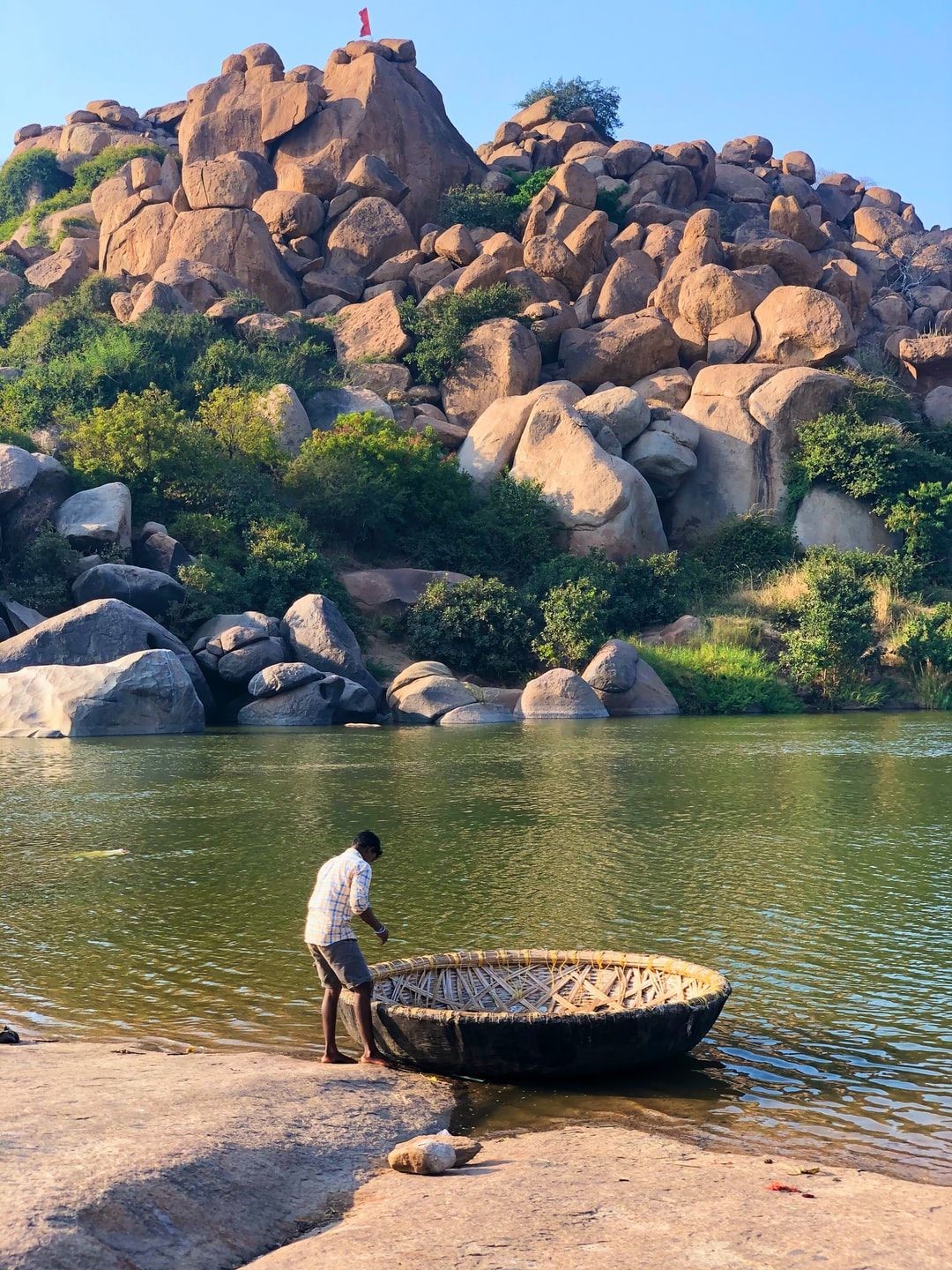 Coracle rides in Hampi are a top tourist attraction for the city. The Coracle is a semi-circular boat made from bamboo and plastic. A ride in the Coracle will cost you a reasonable price and take you through the beautiful ruins of the city.

You can also click some great pictures from the water and have an experience of your lifetime. Tourists are recommended to take the ride in the late afternoon to grab the opportunity of catching breathtaking sunsets from the green waters.

Is Hampi worth visiting?

Hampi has a rich historical past with countless monuments to see. These beautiful UNESCO World Heritage Sites make the city worth visiting.

Are two days enough for Hampi?

Tourists who want to explore Hampi should plan at least two days to explore the city. The best travel itinerary would include three days with a day at Hippie Island.

What is the best time to visit Hampi?

Hampi can be explored during the winter season, which starts in November and ends in February.

Things to do in Nelliyampathy

15 offbeat places in Himachal you must visit

15 offbeat places in Himachal you must visit

Before and after home transformation: Willoughby II