Top 12 Tirunelveli tourist places and things to do

Tirunelveli is one of the most important cities in the state of Tamil Nadu, South India. Earlier the city was known by its old name Nellai. The city is famous for its old temples and waterfalls, which are located in close proximity. Since Tirunelveli is close to the Western Ghats, many tourists come here to enjoy the natural beauty of the place and experience the culture of South India.

By Air: Tourists reach Tirunelveli; you can fly to the Tuticorin (TCR) Airport. The airport is only 37.7 km away from the city, and both cars and buses will take you to and from the city.

By Rail: Tirunelveli Junction railway station is located in the heart of the Tirunelveli station. Travellers can reach this station from any part of the country through direct or connecting trains from major Indian cities.

By Road: Tirunelveli can be reached by the Chennai-Kanyakumari Rd and NH38 highway from Chennai. Additionally, you can also travel to the city from Coimbatore by the same road.

If you plan to travel here, you can take a look at these top tourist places in Tirunelveli and create the ideal tourist itinerary.

Nellaiappar Temple, located in Tirunelveli city, is a Hindu temple. The temple is dedicated to the Hindu deity Shiva, and here, God is worshipped as Nellaiappar or Venuvananathar. His consort Goddess Parvati is also worshipped at the temple and represented in the form of Kanthimathi Amman.

The temple lies close to the banks of the Thamirabarani River and was commissioned by Nindraseer Nedumaran (Koon Pandian), who reigned in the 7th century AD. In later years, many additions were made to the temple structure, and today it stands as one of the top tourist places in Tirunelveli.

You can visit the temple and offer worship or witness the regular pujas conducted here at a fixed time. The temple is located within the city and easily accessible by public transport.

See also: Top 15 places to visit in Chennai and things to do 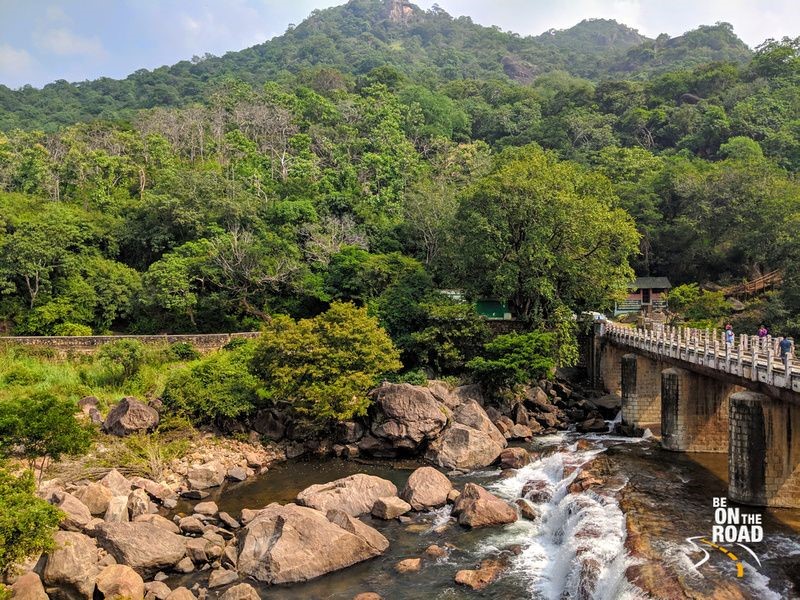 Kalakkad Mundanthurai Tiger Reserve (KMTR) is located in the Tirunelveli district and Kanyakumari district, about 63 km from Tirunelveli. The reserve is accessible by the Ambasamudram-Alangulam Road. The reserve contains the second-largest protected area in Tamil Nadu and is a part of the Agasthyamala Biosphere Reserve.

Some of the famous and endangered animals found within the reserve include leopards, elephants, Nilgiri tahr, Nilgiri langur, wild boar, chithal, sambar deer, leopard cat, and jungle cat. You can take a safari through the reserve to observe animals and have a day out in nature. Vettuvan Koil in Kalugumalai, a panchayat town in Thoothukudi district in the South Indian state of Tamil Nadu, is a temple dedicated to the Hindu god Shiva. The place is only 60 km from Tirunelveli and can be reached by NH44. Constructed in Pandyan Architecture and rock-cut architecture, the unfinished temple was built during the 8th century CE by the early Pandyas.

This rock-cut temple is notable for its architecture and construction method. While the early Pandya rulers helped build numerous cave and stone temples, it is the only known example of a Pandya era monolithic temple that was carved out in three dimensions, in-situ from the top of the hillock. 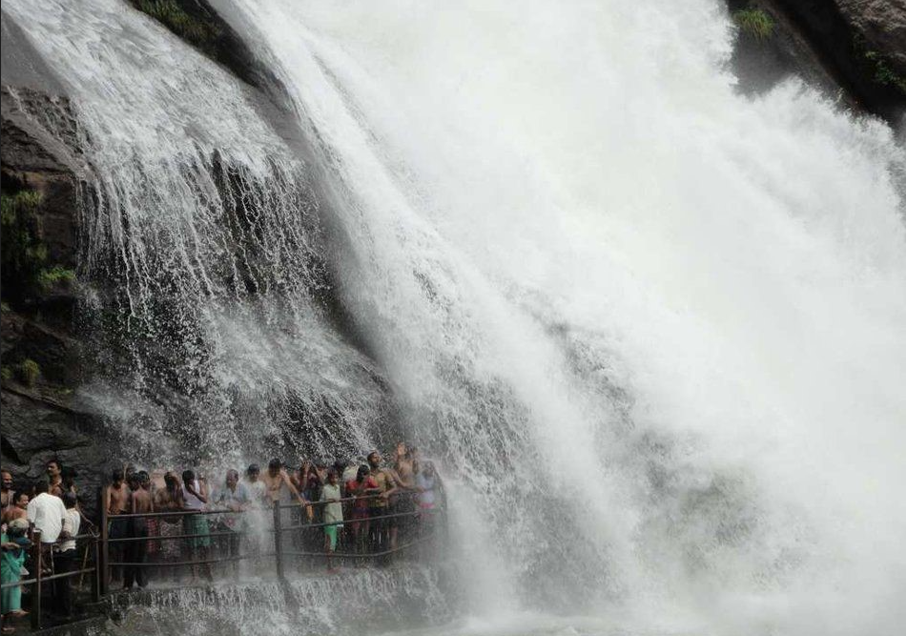 Banatheertham waterfalls is an amazing picnic spot located inside the Karaiyar dam of Tirunelveli district, about 65 km from Tirunelveli. The majestic waterfall is known for its healing properties. The waterfall is said to be the dwelling place for Sage Agasthiyar, who is known for making old medicines from organic herbs and products.

Many tourists still come here to soak in the beauty of the waterfalls and enjoy the crystal clear water which flows down into the nearby areas. You can reach the waterfall easily from the Kalakad Mundanthurai Tiger reserve, and the two places can be combined in a single day’s itinerary. The waterfall can be reached by the Tirunelveli – Shenkottai Road from the city. 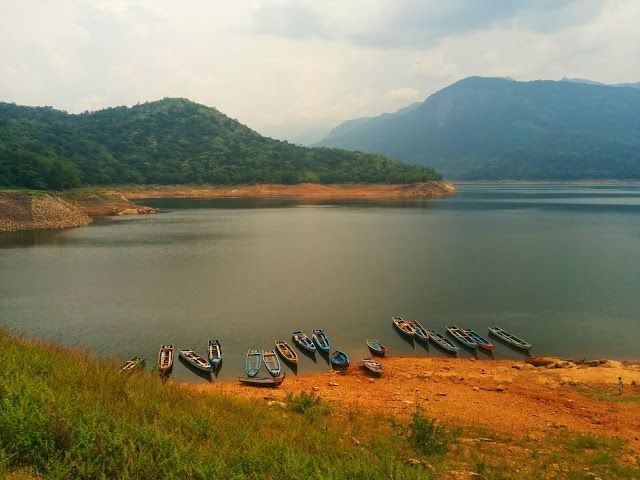 The Karaiyar Dam or Papanasam dam is situated only 49 kilometres away from Tirunelveli city. The dam was constructed to solve irrigation and water supply issues in Tuticorin and nearby areas. This scenic dam is surrounded by low hills which are covered green with trees and vegetation.

The dam offers one of the best picnic spots near Tirunelveli and is visited by tourists for a refreshing ride away from the bustling city. The area surrounding the dam is tranquil, and the woods nearby make it all the more beautiful. You can easily reach the spot by Tirunelveli – Shenkottai road and spend the evening here dipping your feet in the cool waters of the dam. 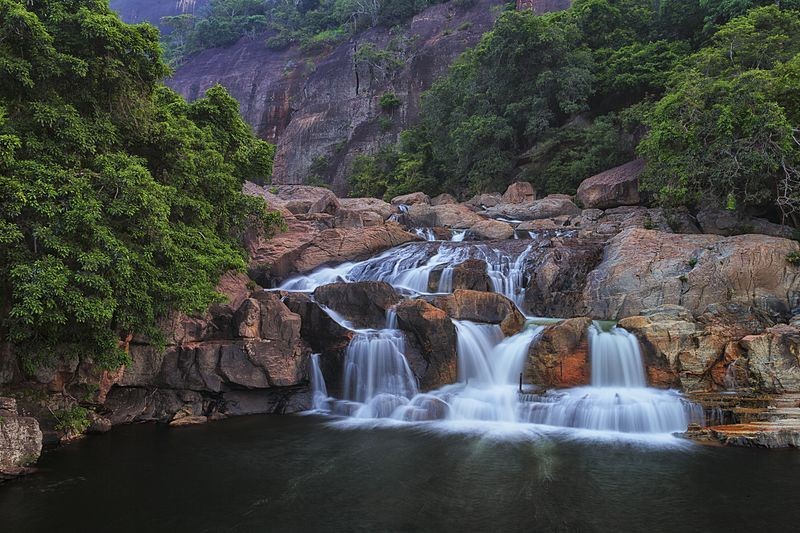 The Manimuthar Waterfalls is situated at the foothills of the Pothigai Hills near the Papanasam town. The waterfall is located on the Thamirabarani River and falls from a height of 25 feet. The waterfall also forms a deep pool of 90 feet which is located at its base. You have to take a short, but scenic route to the Manimuthar falls, which is a top location among the Tirunelveli tourist places.

Many tourists come here to enjoy the beauty of the waterfalls and the forests around this spot. You can have a nice picnic amidst the green trees and enjoy the birds chirping away in the woods. Additionally, the falls also offer some breathtaking views of the sunsets, which no one should miss. 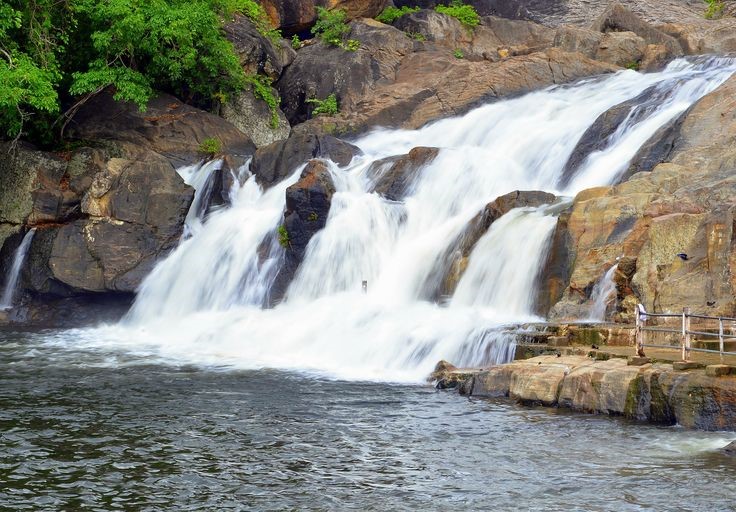 Ambasamudram, also known by its ancient name Vilankurichi, is located in the Tirunelveli district, a little away from the city. The Thamirabarani river runs through the city, which is also located on the foothills of the Western Ghats.

Additionally, the Papanasam dam is also located nearby, which attracts a lot of tourists every day. You can stay over in this beautiful town and rejuvenate yourself after a long and tiring tour of the city.

Papanasam is a small panchayat town in Thanjavur district. This serene town has beautiful green fields and a rich history, which is reflected in its ancient temples. There are three major temples, Pallaivanatha Swamy temple constructed by the Cholas, Srinivasa Perumal Temple and 108 Sivalayam temple.

There are also a large number of waterfalls and dams located in close proximity to the town and can be combined in a single itinerary. You can reach the town by private transport and take a tour around to discover its scenic beauty and tranquil picnic spots. The Courtallam falls is located nearby and can be explored in a single day. 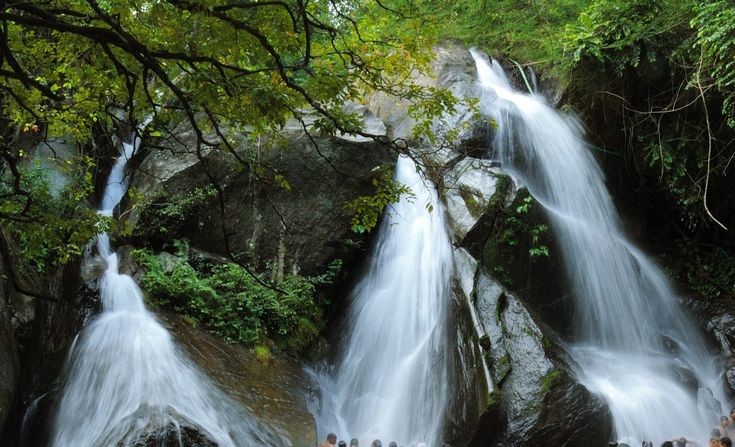 Courtallam Falls, or the Kutralam/Kuttalam Falls, is located in the Tenkasi district near Tirunelveli. The falls lie on slopes of the Western Ghats on the river Chittar. This famous waterfall is also known to tourists because of its close proximity to the Kutralanathar Temple of Lord Shiva.

The waterfall is located amidst the green woods and makes the perfect picnic spot for tourists and locals alike. You can avail private transport which will take you to the waterfall. This short scenic ride makes for a great day trip away from the city and into the heart of the green hill slopes. If you visit the place in the rainy season, you will be able to witness the majestic waterfall at its full capacity. 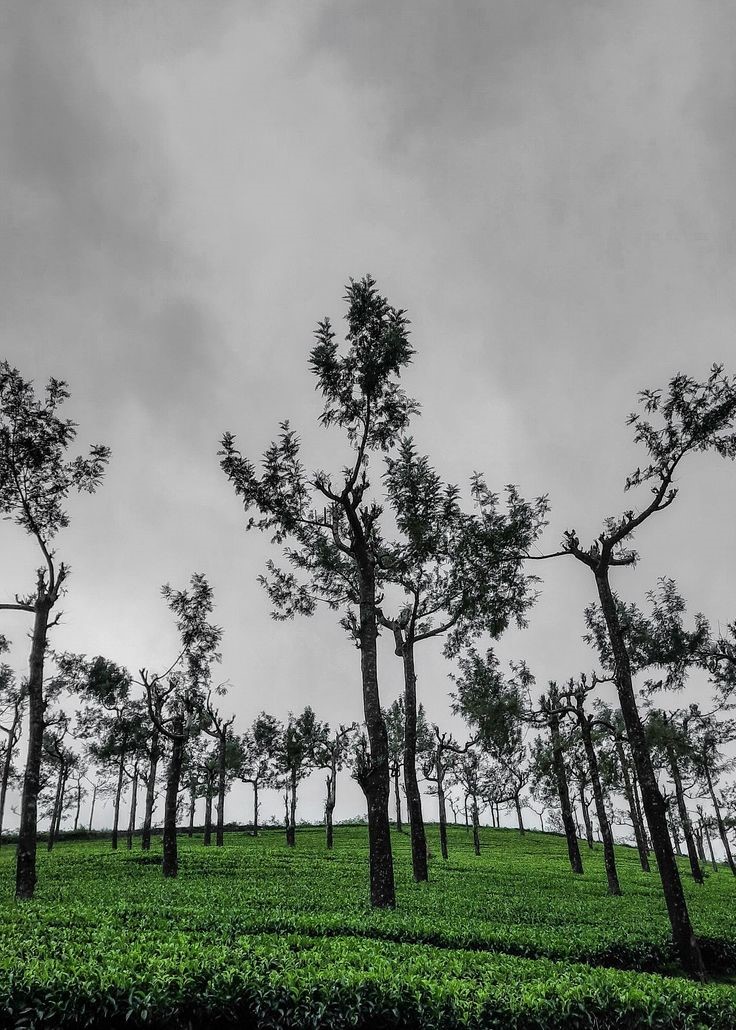 Manjolai is a beautiful hill station which lies a short distance away from Tirunelveli city. The hill station is a prominent tea Plantation area, and is located among dense woods of Western Ghat Ranges near the Kalakkad Mundanthurai Tiger Reserve Area. Manjolai is a quaint town which is less crowded than nearby areas but a great place to spend a few days amidst greenery and the beautiful hill slopes.

This unexplored region lies at an altitude of 1160 metres above sea level. There are plenty of sightseeing places in Manjolai like Tarzan Pool, Manjolai Tea Estate, Kakkachi Lake, Kuthiravetti, and Vanapetchi Amman Temple. This beautiful place is only 65 km from the main city and can be accessed by the Manimuthar to Manjolai Road. 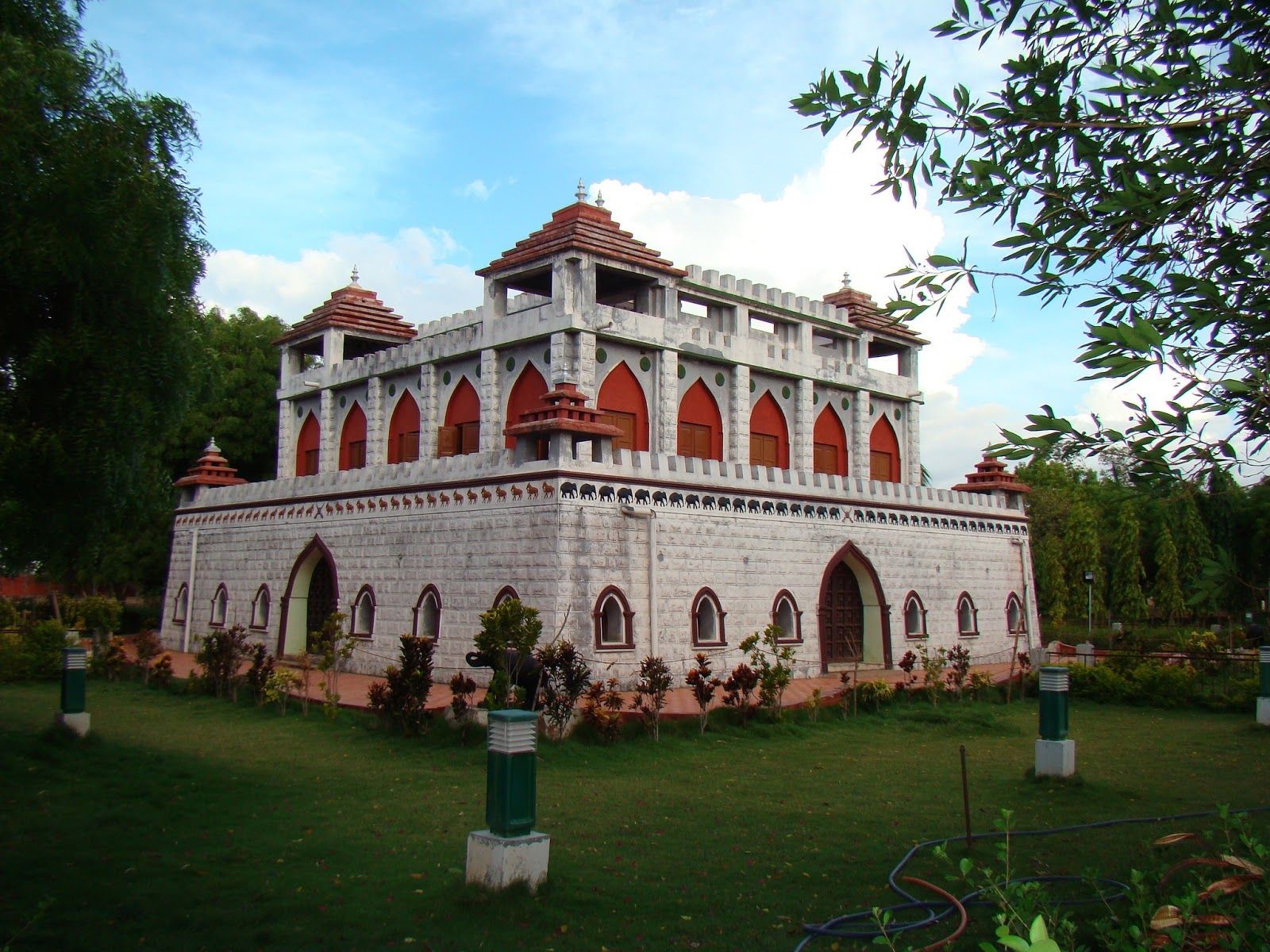 The Kattabomman Memorial Fort is located 40 km away from the city of Tirunelveli and is dedicated to the Indian freedom fighter Veerapandiya Kattabomman Karuthayya Nayakkar (also known as Kattabomman). The memorial was commissioned by the Tamil Nadu Government and built on the very place where the freedom fighter was executed by the British in colonial India.

The well-maintained fort is only a few kilometres away from the main city and can be accessed by public transport. The beautiful fort has landscaped gardens and is open to tourists all year round. You can visit the fort and take a tour of the grounds while learning more about the life of the freedom fighter. You can reach the place by taking the Palayamkottai – Kurukkuchalai Road from Tirunelveli. 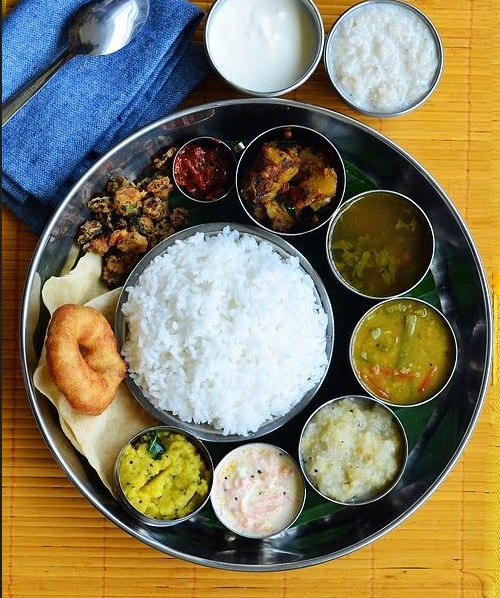 Tirunelveli is the perfect place to try some delicious South Indian cuisine. The city has a fairly large number of restaurants and eateries which serve some tasty Cuisines from South India. Every restaurant has an elaborate menu with both vegetarian and non-vegetarian items.

You can also visit the local food stalls to try some snacks and quick bites, which will give you some insight into their flavour profiles. Some of the best restaurants to eat in Tirunelveli are Kasi Vilas, Nadodi Restaurant, Sithi Kitchen Garden, Muthu Mess, Vaira Maligai Restaurant, Sri Janakiram’s Restaurant, and Chemma Chamayal Chapaadu Restaurant.

Is Tirunelveli worth visiting?

Tirunelveli is a beautiful city with many tourist attractions like hills and temples. The unmatched beauty and places of interest here make Tirunelveli worth visiting.

What is special about Tirunelveli?

Tirunelveli has a large number of ancient temples like the Nellaiappar Temple, among many others. Additionally, the place also has many majestic waterfalls nearby.

The temples in Tirunelveli are the most famous tourist attractions.

Here is your guide to exciting activities in Jhansi

Know about Pothos plant’s facts, physical features, how to grow and maintain, and uses