Things to do and places to visit in Mussoorie

Mussoorie, also known as the Queen of the Hills, is a popular destination for mountain veterans and newcomers alike. Attractions of all kinds can be found in this hill station situated at the base of Uttarakhand’s Garhwal mountain ranges.

Dense forests of deodars and cedars surround the hills around the city, rivers and waterfalls flow freely, and quaint temples dot the landscape here. The hill station of Mussoorie is a perfect weekend getaway location for residents of Delhi, Chandigarh and other nearby cities. If you plan to go on a short getaway trip to Mussoorie, here are some Mussoorie tourist places you can visit.

How to reach Mussoorie?

By air: Mussoorie’s nearest airport is Jolly Grant airport in Dehradun. Dehradun is accessible by direct flights from Delhi and Mumbai. You can hire a taxi or bus from Dehradun to reach Mussoorie. Alternatively, visitors can fly to Delhi, the second nearest airport to Mussoorie, which offers excellent air connectivity with the rest of the country.

By road: There are state-run and private buses connecting Mussoorie to nearby towns like Delhi, Dehradun, and other important places in Uttar Pradesh and Uttarakhand. There are frequent and daily buses to Mussoorie, so passengers can travel conveniently.

By rail: Mussoorie is located around 36 km from the Dehradun Railway Station. Numerous trains serve Dehradun city from cities such as Delhi, Kolkata, Jammu and Amritsar. Upon arriving in Dehradun by train, you can take local taxis or buses for Mussoorie.

One of the most beautiful places in the city, the artificially constructed Mussoorie Lake has recently become a popular tourist destination. The City Board and Mussoorie Dehradun Development Authority are responsible for maintaining the lake. This lake offers a relaxing retreat in the lap of nature, surrounded by mesmerising natural beauty. Besides boating on the lake, you may also enjoy water zorbing and ziplining.

Mall Road is the hub of activity in the hill station. The Mall, located in Mussoorie’s heart, is a colonial relic lined with benches and lampposts and filled with video game parlours, little shops, and skating rinks.

This is often where the legendary author Ruskin Bond can be found browsing the Cambridge Bookstore. The Mall Road is one of the most popular places to visit in Mussoorie, where you can take a stroll or relax in one of its famous bakeries or cafes. The Kempty Falls are one of the most popular picnic spots and tourist places Mussoorie has to offer, situated on the way between Dehradun and Mussoorie. At the height of approximately 4,500 ft above sea level, Kempty Falls is surrounded by high mountain cliffs. At the bottom of the falls, there is a pool perfect for swimming and bathing.

The name Kempty Falls is derived from the terms ‘camp and tea’, implying that elaborate tea parties used to be held here in the evenings, thus leading to the localised name. Take some time to get away from all the busy Mussoorie lanes and head straight to Landour. With the dense forest of Deodar trees covering its surroundings, Landour is an idyllic town in Uttarakhand along the lower western Himalayas. It offers beautiful views of the Himalayas and is one of the most popular tourist places in Mussoorie. Make sure you bring your binoculars and camera along when you visit here to see some scenic views and take some amazing pictures. The Company Garden is located at a distance of around 3 km from Mall Road and is on the list of top Mussoorie places to visit. It is the perfect place to spend time with your family and friends. Designed by Dr H Fackner, this garden is maintained by Mussoorie Garden Welfare Association.

Taking a stroll around the garden, you will see a variety of fountains, lush greenery, colourful birds, and flowers of different types. There is an artificial lake where you can enjoy boating. Dalai Hills, near Happy Valley in Mussoorie, is one of the most beautiful locations in Uttarakhand. Garhwal ranges can be spotted from Dalai Hills; they are famous for their Tibetan prayer flags and Buddha statues. A Buddhist temple can also be found here.

This location is great for catching the sunset, picnicking with the family, camping, and taking pictures, given the serenity and the view. Refreshments are available at nearby food stalls. Mussoorie’s enchanting places to see include many names, but omitting Jharipani Falls would be a mistake. The waterfall is one of those important Masoori places that should not be missed. There are a few water activities available at the waterfall, as well as a breathtaking view of the Shivalik Range. It is a popular destination for adventure seekers throughout the year, except for the monsoon season. Devalsari is located in Tehri Garhwal in the Aglar Valley, about 55 kilometres from Mussoorie. As a relatively unexplored part of Uttarakhand, it is also a natural paradise. With its surrounding lush meadows and mountains, Devalsari attracts tourists seeking peace and adventure.

More than 60 species of birds and over 70 species of colourful butterflies are found here. This place is ideal not only for bird-watching or for observing butterflies, but one can also go trekking here. Devalsari serves as a basecamp for reaching Nag Tibba, also called the Serpent Peak.

How to reach: You can reach Devalsari by hiring a jeep or car from Mussoorie. 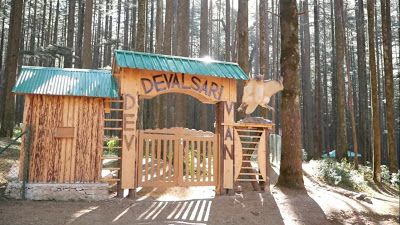 Another great place to visit in Mussoorie is Camels Back Road, a popular tourist attraction where guests can enjoy walking amidst nature and taking in the views. As its name suggests, this 3 km stretch of road resembles the hump of a camel and is best explored in the morning and evening. 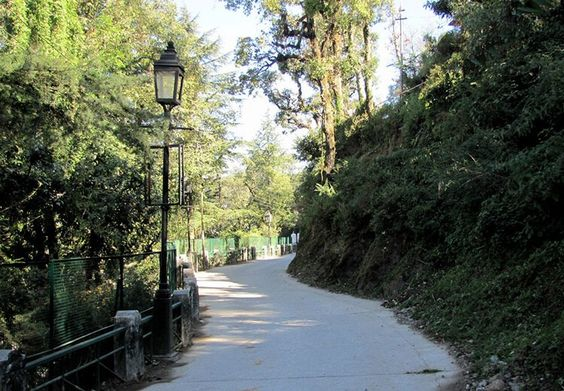 Gun Hill, located at an altitude of 2024 metres, is said to be an extinct volcano. It is possible to see the snow-covered Himalayan ranges, in addition to the Doon Valley and the hill station of Mussoorie in its entirety, from atop this hill. Gun Hill is known for its ropeway that offers stunning views of the Himalayan range. Jwala Devi Temple is a Hindu temple dedicated to Goddess Durga perched atop Benog Hill in Mussoorie. One must hike for approximately 2 kilometres uphill to reach the temple, which is situated at an altitude of 2104 meters. One who visits this temple is said to be resurrected from suffering and blessed with sacredness.

Besides pilgrims, nature lovers flock to the temple to admire its surrounding thick green forest, the Shivalik range, and the Yamuna River. The wildlife sanctuary is popular for housing endangered species, such as leopards, mountain quails, deer, and the red-billed blue magpie. It offers a pleasant walk along pine-covered slopes nestled among Himalayan peaks and is ideal for bird watching and seeing Bandarpunch and Chaukhamba peaks in their surroundings. From time immemorial, Char Dukan, hidden from the clamour of Mussoorie’s mall road, has been serving foodies in the scenic hills of Mussoorie. Every year, tourists flock to this row of quaint restaurants to gorge on pancakes, wai-wai, pakoras, and shakes after an exhausting walk through Mussoorie. Mussoorie is incomplete without a visit to Char Dukan, the coolest hangout spot in the hill station. 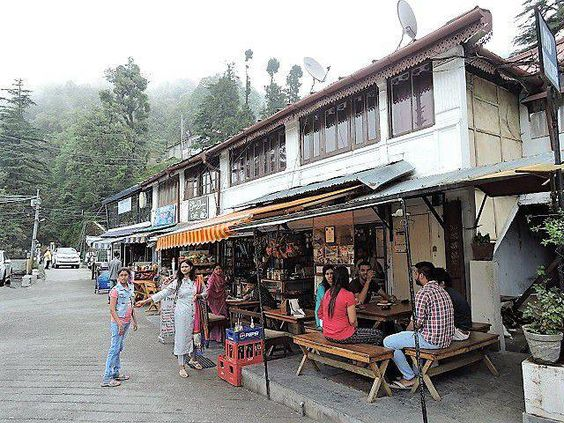 With more than a hundred adventure activities, the Mussoorie Adventure Park has been delighting adventure enthusiasts and young at heart since 2003. The park features a variety of activities, including rappelling, rock climbing, parallel rope, trekking, zip line, etc., that are supervised by highly trained and experienced staff. The park was developed by Real Adventure Sports, a company specialising in extreme adventure sports. Spread over vast acres of land, it sits amid natural beauty and panoramic views. The Mussoorie Christ Church, nestled on a little hillock, along with Kasmanda Palace, boasts that it was India’s very first Catholic church. A stunning Gothic church built in 1836, it is an exemplary example of the transition from Romanesque to Gothic architecture. The entire complex evokes a sense of nostalgia, featuring colonial architecture and old-world flair. Mussoorie’s Mossy Falls is a well-kept secret among the tantalising mountains and the exuberant forests. A 7-km drive away on the Bala Hisar Road lies the mesmerising cascade falls, whose name is inspired by the moss-covered rocky outcropping surrounding the waterfalls. Mussoorie is a popular destination for white water rafting. Riding a raft is a great sport in the hills, as the waters are clear and rapid. Under the strict guidance of professionals, the activity is safe and fun, not to mention memorable and enjoyable. Mussoorie offers a variety of activities, including rock climbing and rappelling. You would be harnessed to a rope or cable for safety reasons. Both of these activities are considered the most adventurous of all time. Does Mussoorie get snowfall?

It is typical for Mussoorie to receive light to heavy snowfall between November and February. During this time of year, the valleys, city, and mountain roads are covered in pristine white swathes.

When should one visit Mussoorie?

A pleasant climate makes April, May and June the peak season for tourists, while winter is the time to visit Mussoorie if you want to see snowfall.

How many days to visit Mussoorie?

Two days would be sufficient to explore Mussoorie and its surrounding areas at a relaxed pace, as there are plenty of attractions in and around the town.

Why is Mussoorie famous?

Mussoorie is one of the country’s most popular hill stations, also known as the Queen of the Hills.