Check out this list of Places to visit in Dharamshala. Also know what to do while in the city

There are only a few hill stations as picturesque and serene as Dharamshala in India. At an elevation of 1,457 metre above sea level, this city is situated in the Kangra Valley, Himachal Pradesh. A distinctive blend of Tibetan and Kangra cultures can be found in Dharamshala, which is also home to the Dalai Lama. Tourists and devotees come to the hill station year-round, and it is well connected via rail, road, and air to nearby cities and towns.

We’ve compiled a list of the top places to visit in Dharamshala, so you can plan your trip accordingly.

Here’s how you can reach Dharamshala:

By air: The most convenient way for tourists from other parts of India to get to Dharamshala would be to fly to Chandigarh and take a taxi.

By road: A network of both state-operated buses and private tour operators connects Dharamshala to Delhi and other parts of North India. Almost all buses stop at the Lower Dharamshala bus terminal.

Himachal Pradesh Cricket Association (HPCA) Stadium, also known as the Dharamshala Cricket Stadium, is situated in the lap of the majestic Himalayan range. One of the world’s highest sports grounds, it is located 1,457 metres above sea level in Kangra valley, surrounded by the Dhauladhar mountain range.  The stadium is operated by the Himachal Pradesh Cricket Association (HPCA) and often serves as a practice ground for the Indian Cricket Team and the Kings XI Punjab team for the Indian Premier League (IPL). As one of the biggest learning centres in Dharamshala, Namgyal Monastery in McLeodganj is a famous tourist attraction. This famous monastery has almost 200 monks, making it the largest Tibetan temple outside Tibet. Along with numerous shrines, temples, bookstores, souvenir shops, and other attractions, this complex is also home to the Dalai Lama’s residence. The monastery attracts crowds all year long due to its vibrant appearance. 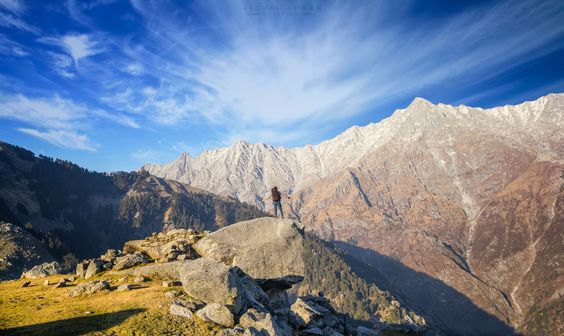 One of the most beautiful places to visit in Dharamshala, Triund Hill is a favourite among trekkers and adventure seekers. A rolling landscape surrounds Triund, which sits at a height of 2850 metres. Along with its trekking trails, Triund Hill offers breathtaking views. An open night sky allows you to count stars and enjoy night camping.

St. John in the Wilderness Church A major church in Himachal Pradesh, St. John in the Wilderness was built in 1852. On the way to Mcleodganj from Dharamshala, the neo-gothic church was built as an homage to John the Baptist. Lord Ergin, a viceroy of India and one of the governor-generals during the British Raj, is also buried here. With its Belgian stained-glass windows, this peaceful edifice is surrounded by lush deodar forests.

Library of Tibetan Works and Archives The Library of Tibetan Works and Archives, founded on 11th June 1970 by Tenzin Gyatso, is known for preserving some important Tibetan literature. There are over 80,000 documents, manuscripts, and books related to Tibetan history, art, culture, and politics in the collection. Despite being one of the more unexplored spots in Dharamshala, the Tibetan literature and history library attracts many history buffs.

Dharamshala’s War Memorial was built to honour the brave soldiers who fought to keep our motherland safe. Soldiers of Kangra sacrificed their lives as war heroes during the Indo-China wars of 1947-48, 1962, 1965, and 1971, as well as the UN peace operations. Names of martyred soldiers are etched on three walls made of black marble. There are also replicas of guns, tanks, aircraft, and more throughout the place. Gyuto Monastery, located in Dharamshala, is famous for tantric meditation. Founded in 1474, it was originally based in Tibet. The Tibetan monks re-established it in Dharamshala after communist China invaded Tibet in 1959. A number of Tibetan monks, including the Dalai Lama, came to India during this period. Dedicated monks in the monastery work for the wellbeing of people by preserving and promoting Tsongkhapa’s tantric teachings. Dharamshala Skyway, a 1.8-km ropeway, connecting Dharamshala and Mcleodganj, takes 5 minutes to travel between the two places. A ride on the ropeway would allow passengers to enjoy stunning views of the town, the mountains, and the lush greenery surrounding them. Take some aerial photos while you’re there! With an area of 1 sq km, the Kareri Dal Lake is named after its majestic equivalent in Srinagar. Stunning deodar plants surround the lake, which is enclosed by snow-capped mountains. With a height of 1775 m, the lake attracts a lot of travellers with its serenity and charm. Trekkers leading expeditions on nearby mountains use it as a base camp. Known as the Dalai Lama Temple, Tsuglagkhang Temple boasts a wealth of Tibetan culture that attracts pilgrims, monks, and tourists.

Buddha’s enormous idol sits on an elevated pedestal in Dalai Lama Temple, which is the main attraction. In addition, the temple has a gold prayer wheel at its centre, chanting ‘Om Mani Padme Hum’ throughout. Rotating the prayer wheel and paying homage to the pedestal is a tradition for pilgrims, which is supposed to multiply merit and bless devotees immensely.

Located 2 kilometres from the town of McLeodganj, Bhagsu Falls is a perfect spot for picnicking with loved ones and family. These majestic and grand falls are set amidst lush greenery and nature at its finest, and should not be missed by any tourist who travels to Dharamshala. Tourists who wish to spend some quiet moments in peace and serenity can enjoy the grandeur of nature at this waterfall. For pottery lovers, Dharamkot Studio is a must-visit in Dharamkot, a village 2 km from McLeod Ganj. There are trained instructors at the studio who offer pottery lessons to tourists and locals interested in learning this beautiful art. One of the studio’s most famous works is its revival of black pottery—an art that is used to make utensils. 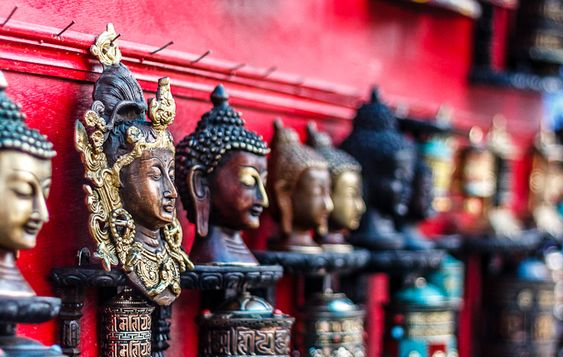 The culture, crafts, and traditions of McLeodganj are well known around the world, and tourists flock there to experience them. Shopping at McLeodganj is a memorable experience, provided you can bargain and buy local items like Tibetan carpets and mats.

Make a point of seeing the sights, enjoying the scenery, sampling the local cuisine, and before leaving, purchase souvenirs and gifts from the local markets so you can carry the feel and memories of Mcleodganj home with you. The best part is that many of the stores here donate part of their profits to local relief organisations. Known for its ancient rock-cut temples, the Masroor temple dates back to the 8th century AD. Among the most popular tourist spots in Dharamshala, this is a relatively new spot. The site has 15 monolithic temples with Indo-Aryan architectural designs depicting various tales from great Indian epics. A majority of the temple’s visitors are history buffs, art enthusiasts, painters, solo travellers, and nature lovers.

A 43 km drive from Dharamshala brings you to Masroor Rock Cut Temple. This ancient temple can be reached by car or taxi. Nechung Monastery, part of the Tsuglagkhang Complex, is one of the most important cultural sites in Dharamshala. The State Oracle, or the Nechung Oracle, resides in this monastery, which is located below the Library of Tibetan Works and Archives. A calm environment is created by the greenery and mountains surrounding the establishment, whose walls are beautifully painted. 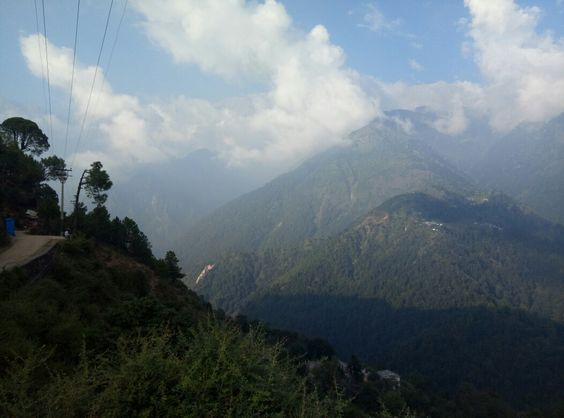 The Naddi View Point in Mcleodganj’s Naddi Village is the perfect place to see the Dhauladhar ranges during the winter when the snow covers the peaks. Naddi View Point is particularly beautiful in the evening, especially when the sun sets against the mountains, allowing visitors to see the sunset and take photographs. Dharamkot, Triund, and Kareri Lake are also accessible from here. Snacks and beverages are available at the tea stalls along the way. 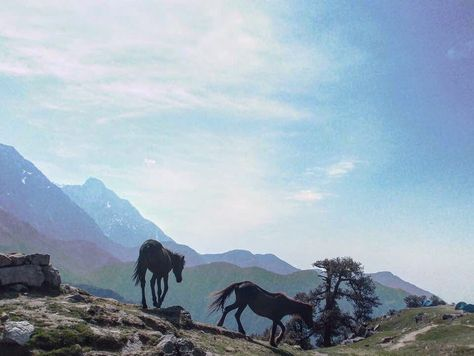 This popular trek in Himachal Pradesh takes trekkers to an altitude of 3,500 metres above sea level and follows a 12-kilometre trail through the Dhauladhar ranges. On the way to Indrahar Pass, the Lahesh Caves provide a great campsite with magnificent views of the snow-covered mountains. The Namgyalma Stupa, located in the village of Upari Barol, is modelled after stupas built during the reign of King Ashoka in the 3rd century BC. This stupa houses not only Buddha’s remains, but also memorials to Tibetan soldiers who perished in the freedom struggle. The structure is surrounded by a number of prayer wheels.

How many days are good for Dharamshala?

Around 4 days are more than enough to explore the beauty and scenic views of Dharamshala.

What is the best time to visit Dharamshala?

From March to about mid-July, you can beat both the scorching summer heat and the freezing winter months.

What are the best party places in Dharamshala?

Mcleodganj, also known as upper Dharamshala, is only a few kilometres from Dharamshala. There are several places to experience the best nightlife here, such as Black Magic, Xcite Bar, B6 Bar and Lounge, and MCLO Restro and Bar.

DIY timber bead air freshener for your car, a stylish and natural DIY