One of the most serene and beautiful cities in Tamil Nadu, Kanyakumari lies at the southernmost point of India and is surrounded by three major water bodies. With a wonderful blend of history, culture, natural beauty, and modernisation, there is something for everyone in this amazing coastal town.

This beautiful seaside town is a great place to spend your holidays. Check out this list of the top Kanyakumari tourist places you need to add to your itinerary.

How to reach Kanyakumari?

By air: At a distance of about 90 km, Thiruvananthapuram International Airport is the nearest airport. The airport has good connections with all major airports in India and some international destinations such as Colombo, Singapore, and many Gulf nations. Taxis and private vehicles can be hired from the airport to reach Kanyakumari.

By train: From major Indian cities, trains stop at Kanyakumari Railway Station. In addition, Trivandrum Central railway station is the next closest station, which is also well connected to most Indian cities.

Vivekananda Rock Memorial, located on a small island, is one of the popular places to visit in Kanyakumari. It was here that Swami Vivekananda achieved enlightenment after three days of meditation in 1892.

Vivekananda Mandapam and Shripada Mandapam are prominent features of the rock memorial. The sight of an enormous Swamiji statue with the Indian Ocean behind it is thrilling. Vivekananda Rock Memorial is a major attraction in Kanyakumari because of its spiritual vibe and tranquil surroundings.

Located on a small island near Kanyakumari, this statue honours Thiruvalluvar, a renowned philosopher and poet. Thiruvalluvar was the author of one of the best works in Tamil literature, Tirukkual. With its 133-foot height, the statue resides on a 38-foot pedestal and is visible from afar. As one of the most popular Kanyakumari places to visit, this place is rich in culture. Our Lady of Ransom Church

Our Lady of Ransom Church, located in Kanyakumari, is a famous Catholic church dedicated to Mother Mary. The church was built in the 15th century and is a brilliant example of Gothic architecture. The church’s blue colour contrasts with the lashing surf of the ocean behind it, making for a breathtaking sight. The golden cross on the central tower of this magnificent structure further adds to its beauty and appeal, and its peace and tranquillity are what most attract people. Unique in its kind, the Tsunami Monument is located near Kanyakumari’s southern shore. Thousands of people who died in the quake and tsunami sweeping across the Indian Ocean on 26 December 2004 are remembered through this memorial. Approximately 2,80,000 lives were lost in this natural disaster not only in India but also in Somalia, Sri Lanka, Maldives, Thailand and Indonesia. Visitors of all walks of life visit this monument to pay their respects to the deceased. The Thirparappu waterfall, which cascades 50 feet from a height of 50 feet, is one of the most popular tourist places in Kanyakumari. Water cascades into a pool below this man-made waterfall. In addition to spending time at the falls, you can also enjoy a refreshing dip in the pool, take a picnic in the natural surroundings, or take a boat ride in the area. A small Shiva Temple is located near the entrance of the falls, where devotees can seek blessings.

How to reach: You can take a bus or book a cab to reach the waterfall, which is 54 km away from Kanyakumari. At the southernmost point of India, Kanyakumari is home to the beautiful, unspoiled beach that changes colour depending on the time of day. It is situated on three seas: the Bay of Bengal, the Indian Ocean, and the Arabian Sea. Incredibly, you can see here that the waters of the three seas do not mix, but the deeper blue, turquoise blue, and green sea waters of the three seas are distinguished by their different colours, which change with the seasons and the weather conditions of the day. The sacred shrine, known as Sthanumalayan Kovil in Suchindram, was built to honour Brahma, Vishnu, and Shiva, also known as the Trimurthis. The temple’s inscriptions date back to the 9th century, and it was renovated in the 17th century.

An architectural masterpiece, this temple represents great beauty. The alankara mandapam area of this temple is most notable for its four musical pillars carved out of a single stone. A thumb strike causes these musical pillars to emit diverse musical notes. It is also noteworthy that the Sthanumalayan Perumal Temple represents both the Shaiva and Vaishnava sections of Hinduism.

How to reach: You can take a bus or taxi to reach the temple, which is 13 km away from the Kanyakumari centre. Padmanabhapuram Palace, the former seat of the rulers of Travancore, is situated 64 km from Thiruvananthapuram. The Thuckalay temple here is a beautiful example of indigenous Kerala architecture and can be found on the way to Kanyakumari. Despite its age, the palace remains awe-inspiring with its murals, magnificent carvings, and black granite floor.

The mahogany musical bow, the coloured mica windows, the royal chairs carved in the far east and the painted ceilings of “Thaikkottaram”, the palace of the Queen Mother, add to the place’s mysticism.

How to reach: A 34-km drive from the Kanyakumari centre will take you to the palace. Taxis and buses are readily available. This 3000-year-old shrine, also known as Devi Kanyakumari Temple, is one of the most religious and historically significant tourist places in Kanyakumari. The temple is one of 51 Shakti Peethas dedicated to Devi Kanyakumari Amman. When Lord Shiva carried Goddess Sati on his shoulders while performing the Dance of Destruction, her lifeless body once fell to this location.

There is an image of Devi Kanyakumari Amman at the temple, holding a rosary in her hand and wearing gold jewellery in her nostrils. The temple is also known for its enthralling scenery and impressive ancient architecture, as well as its spiritual aura. 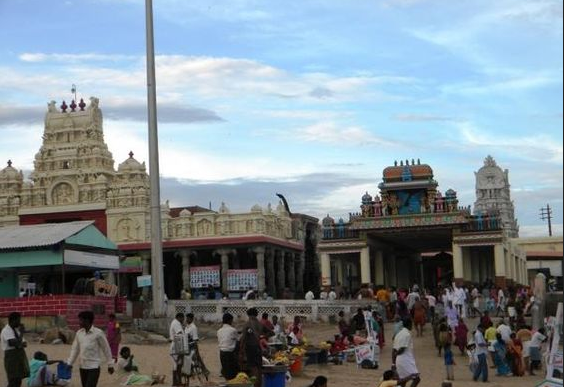 Kanyakumari’s wax museum is a replica of the London Wax Museum, making it a popular tourist attraction. Among the figures housed in the museum are famous national and international figures such as Sir Abdul Kalam, Mahatma Gandhi, Charlie Chaplin, Mother Teresa, and Michael Jackson. A prominent attraction in town, the museum exhibits history and culture from India and other countries. A seaside fort near Kanyakumari, the southernmost tip of India, Vattakottai Fort means ‘Circular Fort.’ Granite blocks are used for much of the construction of the fort, and part of the fort even stretches into the sea. The fort is now under the protection of the Indian Archaeological Department, which completed a major restoration of the fort recently.

How to reach: A bus or taxi will take you to the fort, about eight km from Kanyakumari centre. Located in Nagercoil, the St. Xavier Church, built by St Francis Xavier in the 1600s, is one of the most famous historical structures of religious significance. Since time immemorial, miracles have been observed to occur in this church, establishing its fame and respect. There is no doubt that the church is one of the must-visit Nagercoil tourist places because of its spirituality, power, and divinity.

How to reach: Located in Kottar in Nagercoil, St. Xavier Church is easily accessible from Kanyakumari via public transport. You may want to hire a private cab from a local tour operator if you want to travel comfortably. Those seeking quiet time among scenic surroundings should visit Sunset Point. The unforgettable experience of watching the setting sun amidst an evening sky and mighty ocean is among the best things to do in Kanyakumari. You can even catch the setting sun’s rays and the rising moonlight together when you go here on or around the full moon. Moreover, the point affords amazing views of nearby attractions, including the Vivekananda Rock Memorial, and is a popular spot for photographers. The Chitharal Jain Monument complex has long been a popular destination for both architecture enthusiasts and Jain pilgrims. In addition to being historically important, these monuments also provide excellent examples of how different religions coexist in the country.

Chitharal was once a home to Digambar Jain monks, which is why there is a cave temple with rock-cut carvings of various deities from the 9th century. Along with the majestic monuments, the serenity and enticing aura of the place make it a must-see.

How to reach: These monuments are located 48 kilometres from Kanyakumari. To cover the distance, you can take a cab or a bus. One of the 12 urns containing Gandhiji’s ashes has been kept at this large memorial in Kanyakumari as a tribute to the great leader. Gandhi’s remains were later buried in the Triveni Sangam. Mahatma Gandhi is featured prominently in the Mandapam’s collection of photographs. There is also a library with numerous pre-independence magazines, books, and other publications. Kanyakumari’s Sanguthurai Beach is one of the best places to visit while visiting the city. You can feel the fierce power of the Indian Ocean at Sanguthurai Beach, located in the southernmost part of India. With its white sand beaches and dramatic coastline, Sanguthurai Beach makes for a serene getaway. What are the places near Kanyakumari?

Who should visit Kanyakumari?

Known for its sunsets and sunrises, Kanyakumari is an ideal destination for a family vacation and a delight for nature enthusiasts.

What is the best time to visit Kanyakumari?

The best time to visit Kanyakumari is October until February, as the weather remains calm and pleasant.

Best snow places in India you must visit during winter