Panipat Sightseeing and Things to Do

The famous battles fought on its frontiers are not the only things that make Panipat famous. In the Mahabharata, Panipat was allegedly one of five cities founded by the Pandavas. You will find a rich culture in this city that will take you on a journey through history. It is incredible how many of the Panipat’s places to visit have been around for centuries. Once you arrive in the city, you are instantly transported back in time.

Here’s how you can reach Panipat:

By air: Air travellers can easily reach the city by flying into Indira Gandhi International Airport in Delhi or Muzaffarnagar Airport in Uttar Pradesh, the nearest airports.

By rail: With its own railway station, the Panipat Railway Station, Panipat offers direct train services to the city.

By road: The city of Panipat is easily accessible from all nearby points such as Delhi, Ambala, Sonipat, Karnal, and Jind by bus. You can also choose to rent a cab or drive by yourself.

Panipat: Places you must visit and things to do

Listed below are the best places and things to do in Panipat to help you plan your visit.

A battle site that has witnessed three wars, the Panipat Battle Field Memorial is located in Kala Amb Park. Upon visiting the Panipat Battlefield Memorial, you feel a solemn sense of awe as you explore the site and learn about what happened there. For those interested in learning more about the history of Panipat, a visit to this site remains one of the most worthwhile activities in the city. One of the most popular mosques in Panipat welcomes devotees for worship. Be sure to wear long-sleeved pants, shirts, or dresses when visiting the mosque to maintain proper etiquette. The Kala Amb is a historical site of great significance located about eight kilometres from the city centre of Panipat. Maratha warriors fought the Afghan army here in the third battle of Panipat, a tremendous event in Indian history. As legend has it, the war ground and other plantations near it turned black due to the uncontrolled bloodshed of the war. In the middle of the ground, a mango tree began to bear back fruits, giving the land its name, ‘Kala Amb’.

Interestingly, people now visit the park to take in the quiet surroundings. Kala Amb Park is filled with monuments, making it like a miniature outdoor museum. 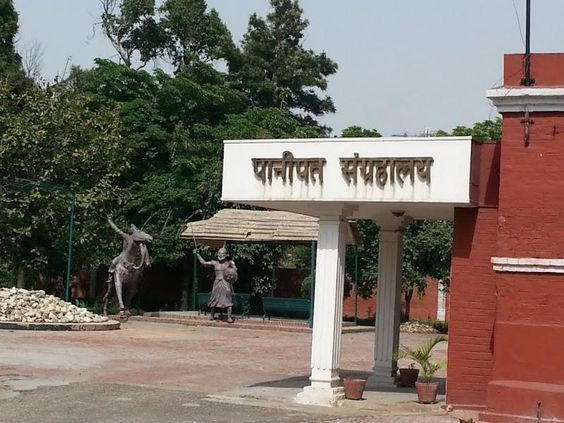 This museum was built specifically to educate the public about Haryana’s archaeology, history, and arts. There is also more information about the Battle of Panipat at this museum. An important part of Panipat Museum’s collection is enlarged photographs of miniatures imported from British and New Delhi museums. Visitors can also see antiques, pottery, jewellery, and armours, providing an insight into Haryana’s history and culture. Panipat never ceases to amaze with its architectural structures. When you think there are no more breathtaking structures to see, you will stumble across Hazrat Bu Ali Shah Qalandar Dargah. Its white and green exterior easily sets it apart from the rest of the mosques in Panipat.

An important saint of the Chisti order, Bu-Ali Shah Kalandar, is buried here. It is a tomb situated at Qalandar chowk, and its architecture resembles the Ajmer Dargah and Hazrat Nizamuddin Dargah in Delhi. Annually, devotees from all walks of life throng this tomb during the famous Urs festival. If you are visiting Panipat, you should make sure to include this destination on your itinerary. Goddess Durga is worshipped at the Devi temple in Panipat city, Haryana. Tourists from around the world visit the temple, a prominent place in Panipat. There is a drought pond near the temple, which has been converted into a park for senior citizens and children. Ramlila has been held in the park during Navratri for the last 100 years. A Shiva temple was built next to the Devi Temple by Mangal Raghunath, a Maratha who remained in Panipat even after the battles. You can find this historical landmark in Panipat about 30-minutes away from Kala Amb Park. Lodi dynasty’s last ruler, Ibrahim Lodhi, is buried in Ibrahim Lodhi Tomb. He was killed in April 1526 when the Turco-Mongol warlord Babur defeated him in the First Battle of Panipat. Red-coloured burnt clay bricks called lakhori bricks were used in constructing the tomb. Visit Ibrahim Lodhi Tomb’s surrounding garden after you visit the landmark.

Among Panipat’s modern parks, Tau Devi Lal Bio Diversity Park is a great place to take a leisurely stroll. The biodiversity park is better known for its leisure activities than its historical significance. The park is a popular getaway spot for families and couples, where visitors can run, picnic, or practice yoga. Bird-watching is also popular at Tau Devi Lal Bio Diversity Park, so if you like taking pictures of nature, this is a wonderful place to visit. There is a wide variety of Indian, Mexican, western, and Middle Eastern dishes available at Cafe Grillz in Panipat. The restaurant offers mouth-watering dishes and a cosy atmosphere that would make a great place for tourists. A few of their recommended menu items include pizza pockets, chicken tikka, cheese pasta, and any of their smoothies.

Where are the top sightseeing spots in Panipat?

What is the best time to visit Panipat?

The best time to visit Panipat is the winter (October – March).

How many days are enough to explore Panipat?

One or two days are enough to explore the historical city of Panipat.

Top tourist places to see in Punjab and things to do