Chittorgarh is a municipality in the western Indian state of Rajasthan. It is the administrative centre of the Chittorgarh District and the historic capital of the Sisodia Rajput Dynasty of Mewar. It is situated on the Berach River, a tributary of the Banas. On the banks of the rivers Gambhiri and Berach stands the city of Chittorgarh.

Chittorgarh’s history dates back to the seventh century. Its previous name, Chitrakut, was in honour of Chitrang, a local Rajput lord. From the seventh through the sixteenth centuries, it was the seat of government for the local Rajput Sisodia clan.

This town’s past is marked by bloodshed and sacrifice. In the Middle Ages, it was captured three times by Muslim emperors. The first was created in 1303 by Delhi’s Sultan Ala-ud-din Khilji. In order to capture the stunning Padmini, the queen of Chittorgarh, Khilji besieged this hill fort. Chittorgarh rose to prominence in the middle of the 15th century under the renowned Rajput king Rana Kumbha.

You can reach Chittorgarh,

By Air: The nearest airport is Udaipur (Dabok Airport). The airport is located 90 kilometres from Chittorgarh. You can hire a cab to reach the city from the airport.

By Train: The Chittorgarh Railway Station is well-linked to cities such as Jaipur, Ajmer, Kota, Udaipur, and Delhi. You can also go for the Palace on Wheels that touches the Chittorgarh station.

Chittorgarh fort, one of India’s biggest forts, is a recognised world heritage site. The fort, which is presently located in Chittorgarh, was once Mewar’s capital. It is one of the most significant historical forts in all of north India, and it is filled with heroic and selfless narratives. Additionally, it accurately portrays Rajput culture and beliefs. One of the most significant locations to see in Chittorgarh is this fort.

The pride of the Rajasthani town, this mediaeval fort sits imposingly on a hill, guardingly looking down over the city. The fort is where the majority of Chittorgarh’s attractions are located. The Chittorgarh Fort is a huge edifice that was initially constructed in the 7th century and occupies a space of around 700 acres.

The Chittorgarh Fort entry fee for adults is Rs 50, while for the kids it’s Rs 25.

One of Chittorgarh’s beautiful tourist attractions is the Kirti Stambh. This tower from the 12th century is located inside the sizable Chittorgarh Fort and serves as a memorial to Adinath Ji, the first Jain Tirthankar.

The Digambars’ nude figures that adorn it serve as a full reflection of their cultural values. One of the nicest locations to visit in Chittorgarh is the tower, which has seven stories and a stairway that is both narrow and steep that ascends to the top from whence views of the area around Chittorgarh may be enjoyed. 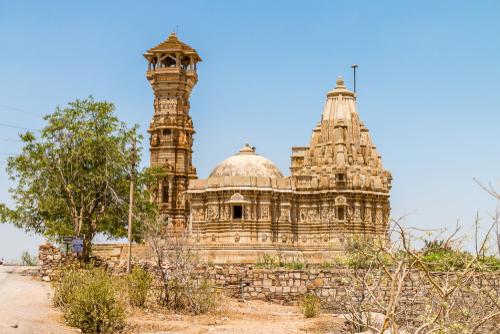 The Padmini Palace is one of the must-see sights in Chittorgarh Fort and is located inside the fort. It has a fascinating history. The conflict between Rana Ratan Singh and Al-ud-din Khilji was sparked by this palace. One of the greatest locations to visit in Chittorgarh is Padmini Palace, which was the very fabled palace from where Ala-ud-din Khilji was allowed to get a glimpse of Padmini in a mirror placed in the main hall.

Ala-ud-din Khilji, drawn to Rani Padmini’s beauty, engaged Rana Ratan Singh in a bloody conflict. A visit to this palace provides insight into both human passions and the history of Chittorgarh. The palace looks out over a wonderful pool, and within, the views are lovely. 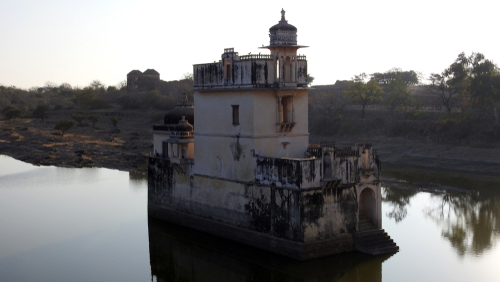 The Sitamata Wildlife Sanctuary is situated in the Pratapgarh district of Rajasthan, a state in northwest India. It is a heavily forested area with extensive deciduous plantations, including Gulmohar, Sindoor, Rudraksha, Bamboo, and Bel trees, among others. The sanctuary contains 108 therapeutic plants, around 17 of which are endangered, according to botanists.

Along with numerous additional bodies of water, the rivers Sitamata, Budho, Jakham, and Karmoi flow through the sanctuary, giving a steady supply of water to the local flora and animals. A Hindu myth states that the Valmiki Ashram was situated in this woodland. As a result, it is known as the Sitamata Wildlife Sanctuary. A temple to Goddess Sita is also located in the region. Thus, the sanctuary is seen as having enormous historical significance as well. 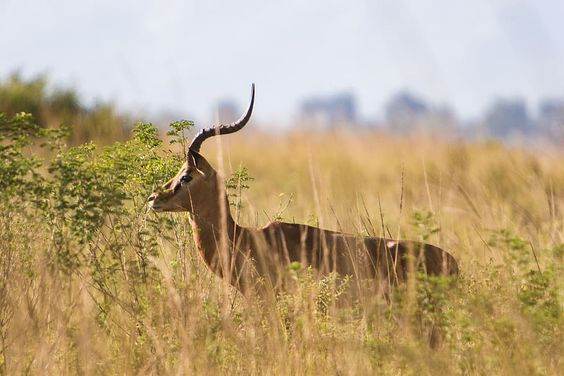 This tranquil temple, which was initially constructed in the eighth century and was devoted to the worship of the sun deity, was changed into a shrine for Kalika, a manifestation of the goddess Durga, in the fourteenth century. One of the top locations to see in Chittorgarh, this temple is one of the city’s most significant pilgrimage sites.

It should not be missed when exploring the fort’s grounds. The elaborate carvings and embellishments that cover the old walls of the temple are the result of many hours of labour, which shows in the design of the building. The temple is still stunning, despite the fact that it is currently mostly in ruins. 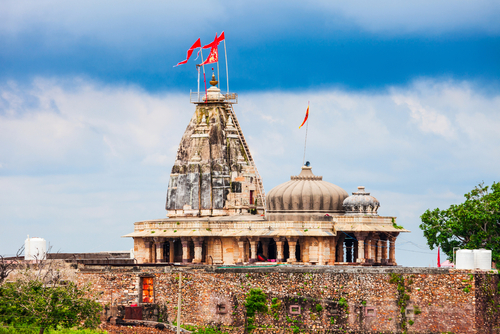 One of the most popular destinations to visit in Chittorgarh is Sanwariyaji Temple. The enormous temple complex is a well-liked pilgrimage site in Rajasthan and is regarded as being second in terms of religious value only to the Krishna Temple in Nathdwara. This temple, which is around 40 kilometres from Chittorgarh, provides a magnificent setting for a few hours of prayer.

The atmosphere of the temple is enhanced by calmness and optimism, and the hallowed halls provide a tranquil setting for reflection and mental and physical renewal. It is a great approach to feel the seclusion and tranquillity that the temple provides to visit as soon as morning breaks.

One of the greatest religious sites to visit in Chittorgarh fort is this temple, which is situated inside the fort near to Fateh Prakash Palace. The biggest of the Jain temples, the temple is a component of the complex. This enormous Shwetamber Jain Temple, which honours Bhagawan Adinatha’s life and qualities, was constructed in the eleventh century.

The name of the temple denotes the presence of twenty-seven separate temples inside it at one time in history. The Sathis Deori Temple is a magnificent sight to behold, even if there is no sign of these structures yet. The building is amazing because of its deft workmanship and magnificent domes. You may really savour the experience of the temple by peacefully sitting there. 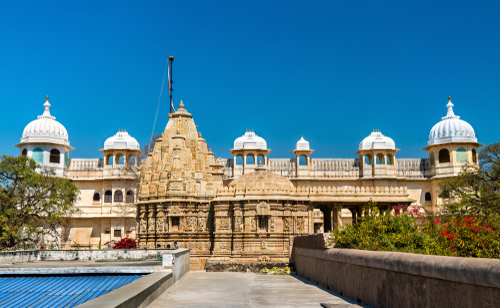 One of Chittorgarh’s most exquisite tourist sites, the Meera Temple reflects the lovely history of devotion as it is shown in the tale of the Rajputana princess Meera and her Lord Krishna. The temple’s sanctum sanctorum is decorated with a number of finely carved statues and has Indo-Aryan architecture.

It is housed inside Chittorgarh Fort. Additionally, there is a little Krishna temple within. This temple is among the top attractions to see in Chittorgarh and may help you understand the history and culture of the time period completely. 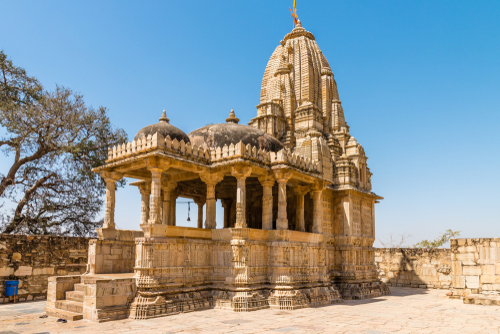 This temple, named for one of Chittorgarh’s savagest kings, Rana Kumbha, is a wonderful attraction. The temple, which honours Varaha, a manifestation of Vishnu, was constructed by Rana Kumbha in the Indo-Aryan architectural style. In addition to being a sacred site, the temple is a fantastic venue to learn about Rana Kumbha’s taste in art.

The temple’s domes, pillars, and statues are stunning, and it is embellished with sacred artworks that the king personally selected. One of the greatest locations to see in Chittorgarh is the temple, which commands attention with its imposing pyramidal top and keeps visitors entranced within thanks to the intricate carvings on the walls. This stunning and varied sanctuary, which is located 25 kilometres from Chittorgarh City, is home to trees like Dhok, Salar, Churel, and Butea. It also provides refuge for a variety of species, including Panthers, Chitals, Wild Boars, Hyenas, Jackals, and Four Horned Antelopes. Visits to this spot are guaranteed to be alone and peaceful, with just the calming sounds of nature breaking the silence.

The footfall in the sanctuary is often on the lower side. Two locations inside the sanctuary offer vantage points from which to see the entire forest from above. Another site nearby is the Bassi Dam. The sanctuary is accessible to visitors throughout the year, but the autumnal months of October and November are when it blossoms into extraordinary splendour. 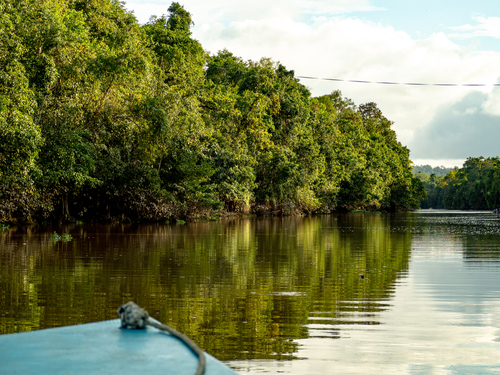 How big is Chittorgarh Fort?

It is said that Chittorgarh Fort takes up about 700 acres of land. The fort is where most of the neighbouring tourist attractions are found. The majority of Chittorgarh’s temples are located inside the fort’s perimeter.

The culturally significant heritage sites in Chittorgarh that highlight the region’s past are its most well-known features. In addition to this, the location is well-known for holding a magnificent fort perched on a hilltop and oozing Rajpujatana traditions.

List of some of the best Shillong tourist places that would take your breath away with their natural beauty.

15 Breathtaking places to visit in Auli

15 Breathtaking places to visit in Auli