Places to visit in Dwarka

A small hump on the outer periphery of the ‘lower beak of a macaw’ – that is how ‘Devbhoomi’ Dwarka looks like when seen on the Indian map of state Gujarat. The ancient city, synonymous with the name of Lord Krishna, is situated on the right bank of the river Gomti. It’s also very close to the Gulf of Kutch on the north and the Arabian Sea on the west.

The original city of Dwarka dates back to the Puranic era, and an archaeological site at the nearby island Bet Dwarka even belongs to 1570 BC! Starting from the reign of the Yaduvanshis or the clan of Lord Krishna, Dwarka’s history is primarily intertwined with sanatan dharma and mythology.

Historically, the city had been invaded by both the Muslims and the British, who plundered its wealth and tried to desecrate its temples. However, it has been resurrected each time, being rebuilt in the hands of those who were religious and wanted to build abodes for the gods.

If you are on a pilgrimage, Dwarka’s temples will welcome you with their epic grandeur and if you are simply there during a tour of Gujarat the place has numerous attractions to keep you busy hopping. Read on to know about the best sightseeing opportunities at Dwarka.

Dwarka, being close to a subtropical desert and thorn woodland biome, has an arid and hot climate with a recorded lowest temperature of 6.1℃ in the month of January and the highest 42.7℃ in the month of May.

October to March is the preferred season, while November to February is the peak one.

How to reach Dwarka?

By Air: The nearest airport at Jamnagar is 137 km from Dwarka. You can take cabs from the airport to reach Dwarka.

By Train: Dwarka (DWK) station lies on the Jamnagar-Okha metre gauge route of the Rajkot division of Western Railway and can be reached from different corners of the country via railroad.

By Road: Dwarka is well-connected to the Indian states by road. There are several private and state buses from Dwarka to cities like Ahmedabad, Porbandar, Amerli, etc.

Top 10 places to visit in Dwarka

You can have a 10-point sightseeing to comfortably complete places to visit in Dwarka and all that in just 2 days! A trip to Somnath temple (237 km from Dwarka; about 4 hours drive) might be an optional add-on to your itinerary.

You can divide your two-day trip into pilgrimage and nature-based sightseeing. It would be recommended to keep the first day for temple tours and the second day for beaches and non-temple spots.

At the pinnacle of the Dwarka temples list lies the Dwarkadheesh temple. It’s literally the chief attraction of the Dwarka temple tour. Popularly believed to have been built by none other than Lord Krishna’s grandson Vajranabh, this temple is also known as Jagat Mandir.

This beautiful architectural edifice is a 5-storey intricately carved building resting on 72 pillars having a 78-metre high spire atop sporting a large, bright coloured triangular flag. Out of the two entrances, the north-facing main entrance is called the ‘Moksha Dwar’.

Dating back to almost 2500 years, this awe-inspiring shrine is also one of the Chaar Dham founded by Adi Shankaracharya in the 8th Century. Temple houses a deity of Lord Krishna and remains open from 6 am to 1 pm and 5 pm to 9:30 pm. It’s located 2.5 km from Dwarka railway station and 1.3 km from interstate bus terminus.

The first among the 12 ‘swayambhu’ (or self-existing) jyotirlingas distributed all over the world, the tour to this temple at Darukavanam, 15 km from Dwarka city,  can be clubbed with that of the Beyt Dwarka island. This is a great place of pilgrimage for the Shaivites. The temple complex houses an 80-feet stunning sitting idol of Lord Shiva.

The temple’s timings are 6 am to 12:30 pm and 5 pm to 9:30 pm. It’s also one of the most important places to visit in Dwarka. This is the second jyotirlinga of Gujarat, next to the one in Somnath temple. Location is 19 km from Dwarka city and entry is free for all. Dedicated to Lord Swaminarayan, an avatar (incarnation) of Lord Vishnu, this relatively newer beautiful temple is one of the most serene places to visit in Dwarka.

This marble-clad temple is 1 km from Shree Dwarkadheesh temple and just 1.5 km away from the Dwarka bus stand and houses many idols of Hindu gods and goddesses.

The foundation stone was laid by Gunatitanand Swami of the Swaminarayan samraday in 1826. The Temple complex has a meticulously maintained garden that adds to the beauty and serenity of the place and makes it a place worth meditation. It also has a cheap dharamshala where pilgrims can book ac and non-ac rooms.

Entry – free for all. 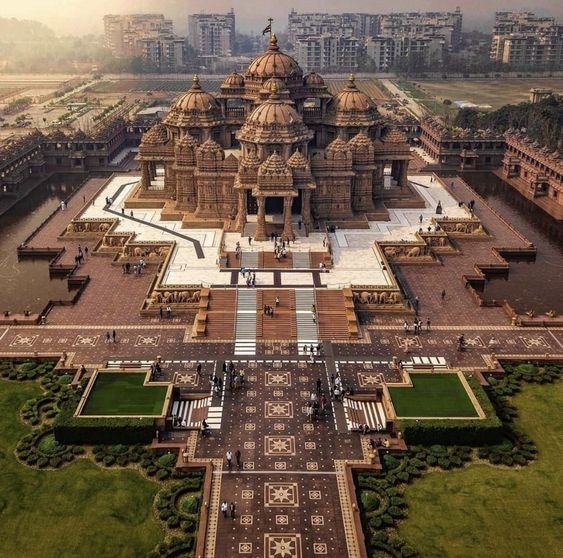 Rukmini, or Rukshmani, was the puranic chief queen of Lord Krishna. She was purportedly cursed at an incidence by the ill-tempered curse-bestowing sage Durvasa of Hindu mythology to live separately from her husband, Krishna.

Hence her temple is about 2.5 km away from the Dwarkadheesh Krishna temple. Location is about 2 km from Dwarka city.

This is an architectural masterpiece dating back to the 12th and 19th centuries and is richly carved with human and elephant motifs on the wall panels. The temple observes a ritual of Jaal Daan or offering water to the deity.

Entry fee: Free; However, Jaldan may cost anything between INR 20 to 1500 depending upon scarcity of water. Bhadkeshwar Mahadev temple overlooks the tranquil waves of the Arabian sea and is surrounded by it on all sides barring a narrow passage that connects it to the mainland. Built  atop a hillock, this temple is located near the confluence of river Gomti and the Arabian sea.

The temple is located 3.7 km from Dwarka railway station.

Supernatural vibes are said to be felt during the evening aarti at this temple amidst crashing waves all around. The narrow pathway gets submerged during high tides and the temple becomes cut-off, however,  it is well-built and remains completely usable during ebb tide.

It dates back to a jaw-dropping 5000 years and is said to be built by Jagatguru Shankaracharya. It’s customary to take a holy dip in the confluence of river Gomti with the Arabian sea at the Gomti ghat and then visit the Dwarkadheesh temple just ahead of it. It’s just 56 steps down from the Swarga Dwar of the same temple.

This ghat is located 3.3 km from Dwarka railway station.

Gomti Kund is the point where this holy dip has to take place. If such dips are followed by sacred rites to forefathers, then it is said they get liberated from their earthly sins, as Lord Krishna himself had taken dips here several times.

Gomti being a tributary of holy river Ganga this becomes one of the must-be-there places to visit in Dwarka. Situated just 3 km from Dwarka railway station Sudama Setu is a nice little cable-stayed bridge built by Reliance Industries Ltd in collaboration with Gujarat Tourism Department and Gujarat Pavitra Yatradham Vikas Board. The completed bridge came into use in 2016.

Spanning across the Gomti river, the bridge connects the Dwarkadheesh temple with the Panchnad or Panchkui Tirth on its southeast. The bridge not only serves a religious purpose of pilgrimage but also gives access to the island that has five sweet water wells (named after the Panch Pandav) or panch kuans.

Charming views of the Arabian sea, river Gomti and Dwarkadheesh temple can be seen from the bridge. During winter, camel and ATV bike rides also take place across it. A temple dedicated to the river Gomti and built almost on the edge of the Arabian sea. The sea waves continuously break on the temple walls creating reverberations inside. Inside it, along with Mata Gomti, other gods and goddesses like Samudra Dev, Mira Bai and Mata Asta Bhavani are enshrined.

As per Hindu mythology, Sage Vashitha brought the river Gomti from heaven after the epic war of Ramayana so that Lord Rama could take a holy dip and purify himself. After this event, Gomti became embedded at the ghat, and its flow disappeared in the Arabian sea. The temple complex houses a ceremonial tank.

The Panchnad and Panchkui Tirth are on the southeast on the other bank of the river. Do remember that this temple is one of the must-go places to visit in Dwarka. Lying by the Shivrajpur village, this is a serene beach with a beautiful white sandy bay line. On the way to Beyt Dwarka, this beach provides breathtaking views of the blue waters of the Arabian sea. Nearby Dwarkesh Beach Resorts and Water Sports can arrange for scuba diving at INR 2000 for 20 minutes.

A 43 m tall lighthouse that was inaugurated in 1962 is situated 1.5 km to the south of  Bhadkeshwar Mahadev temple. It’s 4 km from the railway station and a great point to view sunsets at the sea.

It’s a great point to view sunsets at sea. Visiting time for the Lighthouse is between 4 pm to 6 pm. The entry fee is free. Beyt Dwarka ferry boarding point is 33 km from Dwarka railway station and 35 km from ISBT of Dwarka via NH 947.

Beyt Dwarka is an island off the Gujarat coastline, which can be reached by ferries leaving from Okha jetty. It is home to a number of temples like the Beyt Dwarkadheesh temple, Abhaya Mataji temple, Makardhwaj Hanuman temple, and Neelkanth Mahadev temple.

This island boasts beaches featuring white sands and corals. Dolphins are also sighted here. This is also believed by people as the original ancient abode of Lord Krishna. Things to do while touring Dwarka

While getting around the 10 sightseeing points, you can also take time out for the following activities:

Don’t forget to taste Gujarati thali in any of them while you visit temples.

Sparing a meagre 20 minutes for scuba diving at Dwarkesh Beach Resorts and Water Sports might be a life changing experience provided you know the basics. You get a chance to witness amazing marine life and corals underwater.

During your journey to the Beyt Dwarka Island from Okha jetty or during your return you will happen to see schools of dolphins merrily swimming alongside if you happen to visit Dwarka between mid October to May. There is a marine wildlife sanctuary.

You can try this at Beyt Dwarka if your span of stay is a bit more. For a 2D/3N Beach Camping package here Ahmedabad-based THY Adventure charges INR 3500 per person.

Last but not the least, don’t miss the panoramic beauty of sunsets at various destinations near the beaches.

What is Dwarka famous for?

Dwarka is famous for the Dwarkadheesh Temple where thousands of devotees from worldwide accumulate during Janmashtami – the day Krishna was born.

In 1473, the Gujarat Sultan Mahmud Begada ransacked the city of Dwarka and destroyed the temple.

According to ancient texts like the Mahabharatha, Dwarka was created by Lord Krishna after he killed his uncle Kansa in Mathura.

How to pay bills online and get a new connection?

10 Best Places To Visit In Gandhinagar And Things To Do

10 Best Places To Visit In Gandhinagar And Things To Do

10 places to visit in Chikkaballapur during your trip