Places to visit and things to do in Ladakh

Ladakh is one of the most exciting places to visit on vacation. It is a dream destination for many travellers and offers a combination of leisure and adventure experiences. As part of the mighty Himalayas, it is situated at 3,542 metres above sea level and is home to some fascinating attractions, including palaces, lakes, and monasteries. Check out this blog for a list of the best places to visit in Leh Ladakh.

You can reach Ladakh in the following ways:

By road: Leh Ladakh has two road routes – one from Manali (494 km) in Himachal Pradesh and another from Srinagar (434 km). Leh is accessible by road through Kargil and Srinagar by JKSRTC buses, both deluxe and ordinary, that travel frequently between the two cities. The trip to Leh can also be made on a bike from Srinagar, Manali, Delhi or Chandigarh or by hiring a cab or jeep.

By train: Ladakh does not have a railway station, so you cannot reach it directly by train. Ladakh’s nearest railway station (700 km) is Jammu Jammu Tawi, which is accessible from Kolkata, Delhi, and Mumbai. To reach Ladakh from Jammu, you can hire a cab or take a JKSRTC bus from the station.

17 places to visit in Leh Ladakh

This endorheic (landlocked) lake is located at the height of 4,350 metres and is the most popular among Ladakh tourist places. Also called Pangong Tso, it stretches from India to Tibet for 12 kilometres. Its unique characteristic is that it changes colours from azure to light blue, green, and even grey throughout the year, rather than remaining blue all year.

Aamir Khan’s 3 Idiots brought fame to Pangong Tso lake, so it deserves to be on your list of places to visit in Ladakh. Bring a picnic basket and camp beside the lake as you can enjoy every moment of peace and tranquillity.

How to reach: Getting to Pangong Lake from Leh takes five hours, and you can rent taxis, motorbikes, jeeps, and cars at reasonable prices. The state road transport corporation also provides regular bus service. The Khardung La Pass is the highest motorable pass in the world and is known as the gateway to the Nubra and Shyok Valleys. Many tourists cross the border from Leh and stop here for a while to take photographs. The mountain pass is an adventure hotspot for motorcycle enthusiasts from around the globe. Located 40 kilometres (25 miles) from Leh, Khardung La Pass rises to 18,379 ft (5620 m) above sea level.

How to reach: From Leh, daily buses operate between Nubra valley and Leh via Khardung La pass. An alternative is to hire a taxi with an experienced driver or to drive yourself. Tourists also prefer to ride bikes or cycle. A 140 km drive from Leh takes you to Nubra Valley, located in Ladakh’s union territory. The valley is near the ancient Silk Road and traversed by the Shyok and Nubra rivers. It is also home to some beautiful monasteries and places in Ladakh.

A 32-metre statue of Maitreya Buddha can be found near Diskit Monastery in Nubra Valley. The valley offers many activities, such as ATV rides and ziplining. Because the road further leads to the Siachen base camp, the highest battleground in the world, the area is currently under military supervision. Bactrian Camel Safaris are famous in Nubra Valley. Rather than the one-humped camels you normally see, these camels have two humps. Silk route travellers relied heavily on them. Today, these are used for safaris throughout the region and are extremely popular with tourists. Nubra Valley’s Bactrian camel rides are most enjoyable between July and September. Hundur camels are capable of carrying two or three people at once. On a steep mountain top, 11,841 feet above sea level, lies the magnificent Shanti Stupa in Leh. It contains Buddha relics consecrated by the 14th Dalai Lama and is a place of religious significance for Buddhists. Tourists also like it because they can enjoy a panoramic view of Leh and nearby Changspa village.

Shanti Stupa looks especially beautiful when illuminated by the moonlight during the full moon night. A famous tourist spot in Leh Ladakh, it is one of the ideal places to visit for those seeking peace through prayers to god and those wanting to capture the wonder of nature’s splendour. Indulge in one of the best activities in Ladakh to channel your inner adventure junkie. A popular activity in Ladakh is river rafting, which all thrill-seekers find quite enticing. And you will certainly be amazed by the Phey to Nimmo trail. Explore the stunning monasteries and quaint villages that make Ladakh famous all over the world as you make your way through this region. On the boat, make sure you follow all the directions given by your guide. Located within Changtang Wildlife Sanctuary, Tso Moriri Lake is the lesser-known twin of Pangong Tso Lake. The scenic beauty of this lake is enhanced by its location. A barren landscape with snow-capped mountains in the background makes for a breathtaking sight.

As a lesser-known place, this lake is less crowded, so you can be sure to get a private spot. Tso Moriri Lake is the perfect spot for stargazing when the stars are out at night. 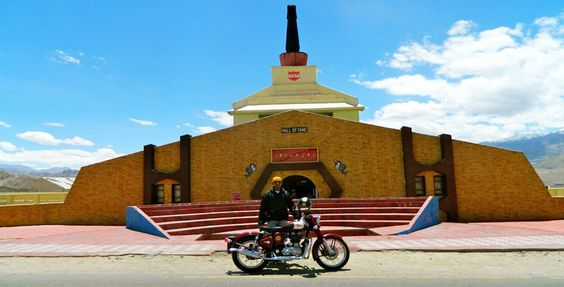 This museum is located on the Leh-Kargil Road, approximately four km from Leh and commemorates the brave soldiers who died fighting for India in the Indo-Pakistan war. In the Hall of Fame, the Indian Army displays weapons and amenities seized from the Pakistan Army, along with pictures and biographies of brave soldiers. Additionally, the museum displays apparel used by the Indian Army in the Siachen area. In India, a journey along the frozen Zanskar River (also known as The Chadar Trek) is one of the most challenging and unique treks. There is a blanket of ice covering the Zanskar River in Leh Ladakh during winter, hence the name ‘Chadar’. Take a trek on the frozen river and witness its transformation of colours. Depending on the weather, the six-day Chadar trek is usually conducted during the latter part of January until the end of February or even into early March. Located in the remote region of Ladakh, this valley is popular for its breathtaking views. The Tethys Himalayas include this valley. With its majestic mountains and sparkling clean rivers, the semi-desert region has unique flora and fauna. You can even enjoy thrilling river rafting at this site. Located around 15 km southeast of Leh, Stok Palace is the summer home for the Ladakh royal family and descendants of King Sengge Namgyal. The Dalai Lama opened it to the public in 1980 after it was established by King Tsepal Namgyal in 1820.

There is a museum and temple located within the Stok Palace, which has been transformed into a heritage hotel and museum. There are some quirkily decorated rooms in the hotel, which have rustic interiors with royal antique decor.

Hundar is a remote village located seven km away from Diksit Monastery in Nubra Valley. Its famous features include sand dunes, a cold desert, and camel rides on Bactrian camels. It also has a great deal of greenery and breathtaking scenery. A major spot of interest here is Hunder Gompa, one of the oldest monasteries of Leh. In the area beyond the village, the Pakistani Army controls the area surrounding Siachen Glacier.

How to reach: You can reach Hunder Village by bus or jeep from Leh, which is 150 kilometres away. 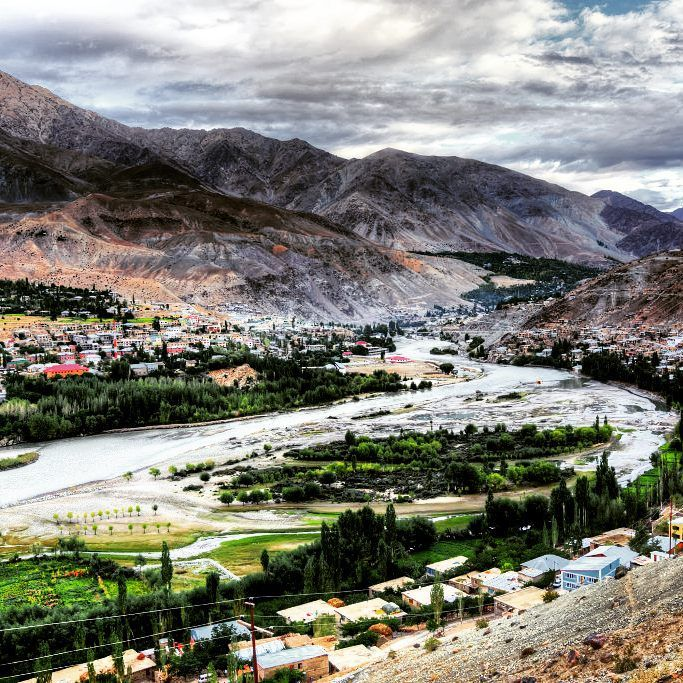 The Kargil Area lies on the Pakistan-administered Kashmir’s Baltistan side of the Line of Control, facing Kashmir Valley to the south and Baltistan to the west. Kargil district includes Zanskar as well as Wakha, Suru, and Dras valleys. During the 1999 war between India and Pakistan, Kargil was at the centre of the conflict.

Mountaineering and trekking are excellent activities in the area because of the famous Nun Kun Peaks. A river rafting trip is also a possibility in Kargil since it sits on the banks of the Suru.

How to reach: The distance between Leh and Kargil is 218.9 kilometres, and the journey takes around three hours. Therefore, you can take a taxi or drive your vehicle. Alternatively, you can take a bus from Leh to Srinagar and then board a bus from Srinagar to Kargil to continue your journey. Ladakh’s oldest monastery, Likir Monastery, is located in the scenic Likir village, 52 km from Leh and is one of the most famous places to visit in Ladakh. A 75-foot-long seated statue of Maitreya Buddha gilded in gold is the main attraction here, belonging to the Gelugpa sect of Tibetan Buddhism. Assembly hall walls here are also adorned with paintings, murals, and thangkas depicting guardian divinities.

How to reach: Manali-Leh remains open from July to September, and self-driving or hiring a taxi is the most convenient method of transportation. You can also take a local bus between Leh and Likir from 5:30 AM to 3:30 PM. Located on a cliff above the picturesque town of Leh, the Royal Leh Palace is reminiscent of the Potala Palace in Lhasa. An iconic symbol of the old days’ glory when the royal family lived in this town, this is one of the popular places to visit in Leh for any explorer. Adding to the charm of this palace is the stunning Buddha statue at the back. Snow Leopards are found in only a few places throughout the world, so seeing one is a true treat. The Hemis National Park in Ladakh is home to more than 200 snow leopards, which can be spotted only in the winters when the snow leopard trek is taking place. One of the world’s highest national parks, Hemis National Park, is located between 3,300 and 6,000 metres above sea level.

How to reach: Several ways are available for visitors to reach the park. Trekking from Spituk Village to the National Park is an experience you won’t regret if you love adventure. Additionally, you can reach the park by public transportation. Phugtal Monastery (Phuktal) is a Buddhist monastery located in Ladakh’s Zanskar region in the south-east. A monastery built around 2500 years ago, it is located at the mouth of a natural cave on a cliff. At a distance, Phugtal Monastery resembles a honeycomb. Among trekkers going to Ladakh, it is a popular place to visit.

How to reach: Phuktal Monastery is not accessible by direct transportation. Getting here requires a long trek. The first step is to reach Padum, where you should take a taxi to Anmo village. Further ahead is a trek that leads you to the monastery.

What are the best shopping places in Ladakh?

What is the perfect time to visit Leh Ladakh?

Leh Ladakh is best visited in the summer, from March to August.

How many days are enough for a trip to Leh Ladakh?

In order to fully enjoy Leh Ladakh, it is recommended to take a vacation of around 8-10 days.

Functional and Affordable: Jofran Furniture, at a Glance